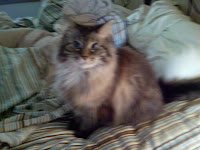 This past week we added another member to our family. Ken’s mom brought over her cat and “gave” her to us. They got a new dog last month, a giant, wonderfully beautiful Golden Lab, and the cat has not made the adjustment. She lives in the basement, refusing to come up, so she was brought to our house to see if she’ll adjust better here and have a better cat life. I don’t really mind, what’s one more, but it certainly changes the dynamics of the house. There’s hissing and growling and everyone’s out of sorts with their sleeping arrangements because Reba has taken over Caesar’s spot sleeping on Kenny at night. She’s a cross-eyed little thing, hence the name Reba…we renamed her, her name is actually Mooley. Now seriously, I’m not the best cat-namer in the world, but I don’t give my pets racist names. Linda swears it’s a Celtic name or something, but in Cleveland, it’s slang and racist. Once again when a pet naming situation arose, Jill suggested Cracker. We can’t go from Mooley to Cracker. So Reba it is. So far she ignores her name, but I think she’d ignore it no matter what we called her. She does her own thing. Oh, by the way, she’s a ferocious biter, a puker (we’ve awoken every night to the sound of a cat hocking up something unpleasant) and has shit all over herself. We’re so happy to welcome her to the family!

It was a typical week with the ordinary happenings. Work is still great, even though this would be considered my worst week there so far. But even my worst day at my new job is better than my best day in Product Management. Seriously, it’s no wonder people stay a year and get out of there. It needs a major work-load and managment overhaul. Well, I’m happy to say not my problem any longer. I was busy analyzing competitor Valentines cards and getting the findings into a Powerpoint presentation. I got that wrapped up and uploaded before I left on Friday.

I had a major crying fit yesterday because I got nail polish remover on my new coffee table and it left a residue mark on the slate and took off some of the paint around the edge. Kenny kept telling me he’d fix it, it wasn’t the end of the world, but after the debacle with my car flooring, and now the new table, I felt defeated and had a pity party that all my stuff gets ruined. Kenny tried the “there’s people without feet” line but yesterday I just didn’t care. I just want something to be – and remain – in decent shape and that doesn’t seem to happen all the time anymore. Oh, well. Life goes on, I quit crying and in the light of a new day it doesn’t seem so dire. Still irritates me, but I’ll check Heloise’s Helpful tips to see if I can do anything about the little table mark.

After my pity party, we went car shopping for Kenny. He turned in his leased Pacifica over a week ago and the plan was for him to drive his Trans-Am around for the summer and buy something going into the winter. I don’t like riding in the Trans-Am, it’s definately a boy car, but we take my car when we go anywhere on the weekends. Anyway, he was getting his car tuned up, some new tires, etc., and the mechanic offered him $5,000 for the car, so he said,”Sold!”. The engine is having problems anyway, and since he was going to sell it in the Fall or next spring for $3,000, he took advantage of the situation and got rid of it now.

He ended up buying a 2002 Ford Explorer yesterday, we think he got a great deal on it and it is big enough to haul all his music equipment around. The gas milage on those things is horrible, but I pointed out he’s not big mileage guy anyway so it doesn’t really matter. They actually made a mistake at the lot and gave it to us with tax & title included in their bottom line price, so that took off $700 from what he was expecting to pay. I negotiated new tires, a 1 year warrenty, freeon for the a/c, a fix to the “door ajar” sensor that won’t go off, and wiper blades.

The best thing to come out of the whole car-shopping day for Kenny was I got hooked up with a guy who can dye the carpet in my car back to the original color where the Oxyclean did it’s thing. I will be giving him a call Monday morning, they told me he’ll even come to my house and fix it in the driveway. I’ve got my fingers crossed!

Today is simple plans for doing some household organizing and then perhaps catching a movie later in the afternoon. Typical, ordinary week, which is okay by me. I don’t mind a little ordinary every now and then. 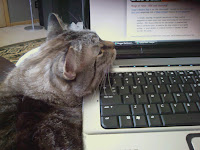 Peace and enjoy the wonderful weather!