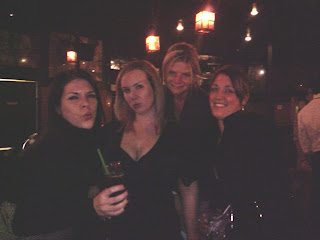 What a week it was! The girls from Product Management and I went out after work on Thursday to celebrate the kickoff for our long holiday weekend. Nothing says “Celebrate Jesus” like happy hour cocktails and appetizers. Pictured are my “peeps” (see how I tied that right into Easter!), Emily, Kristin, Stefanie, and Kristen. We drank. A lot. We started out at Vhooda in Middleburg Hts., they offered up $3 martini’s so we enjoyed an assortment of them. They had a live jazz band which seemed to attract an older crowd, and these girls were on the prowl for some young studs. So we changed locale’s to the bar right behind Vhooda, Groucho’s Saloon. They had an after-work party of young boys so the girls were quite happy to hang out there. Oh, yeah, they had a good happy hour as well. Needless to say, 7 hours later Kenny came to get me. It was out-of-control fun with them, but I am far too old to party with a group of 20-somethings! We danced til I was sore the next day and I ended the evening with my own special nightcap – puking in the parking lot. I would have been FINE had Kenny not kept insisting I needed to throw up before getting in the car. All that talk about it brought it on, and I yelled at him for Jedi-mind-tricking me into puking. Anyway, a couple of the girls met some potential boys, everyone got home safe & sound and I’ve got a new mission to be able to go down into the splits on the dance floor like little Stefanie is able to do. I think I’ll be able to do that right after I get the body of Jessica Alba, which I said something about working towards many months ago. Ah…good times. At least I didn’t try to drink a cup of dirty napkins, which has happened before. All proud moments for me.

It was a surprise that I wasn’t feeling too badly on Friday morning when I awoke. We decided to take care of a few things and then to carry forward my yearly tradition of gambling on Good Friday. We headed to Erie for the day, we had a late afternoon start and just wanted to go for a few hours and then come home the same evening. The gambling was better for Kenny, he ended up with a variety of $400-$500 winners and then he won a nice little jackpot of $1,600 on a $5 slot machine. It was at the end of the evening so we were happy to cash that out and head for home.
Kenny had a headache so I got behind the wheel and headed for home. I could not believe the snowstorm that awaited us once we got on the Interstate. It was a white-knuckle ride until we could get to the next exit and turn off for the night. It was white-out conditions the likes that I have never driven in before; the few souls who were out there were also driving with their hazards on, there was just no visibility at all. We were only about 10 miles from the casino and got to the exit fondly known as “Kenny’s Exit.” He had an incident there one time and needed to exit there to poop at the Burger King – it was a critical moment for him. He had been doubled over in pain for a few miles and thought he was going to have to pull off the road and poop on the side of the road, but then like a Phoenix rising out of Arizona (Seinfeld reference), the Burger King popped up and he was able to poop.
Anyway, back to the point of the story: Kenny’s exit saved us, they had a Best Western we were able to find with the help of the car and we got a room for the night. It was a bargain, $61 with a complimentary breakfast in the morning. The room was very nice, and I wasn’t in too much fear of it being an incident ala Vacancy. It offered 2 full-sized beds so we separated for the night, sprawled out in total relief to not be driving in that weather and nodded off. It was just this morning that we headed for home, and the roads were much better. But now this: 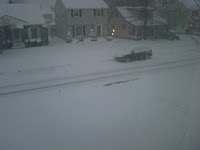 The view from the front window, which looks very much like the same picture I took months ago in the heart of the Cleveland winter. What the F. That’s my lone little car parked out on the road, getting assaulted with snow. April is letting us all know just what it thinks, and it’s not friendly.

My fish moved from office to home this week. I thought it would be easier to take care of him, I find I’m too busy to take the time to take care of him during the workday. Needless to say, his little bowl toppled over in my car on the drive home, sloshing fish and stinky, filthy water all over the floorboard. Kenny rescued him as soon as I pulled in the driveway and surprisingly he was still alive. He’s now swimming around in his bowl on the new coffee table, but his water looks very odd. My guess is because it’s in front of the window, but I don’t really know for sure. Anyone with fish-facts, please advise. So far the cats haven’t eaten him, which is a good thing, but they are quite intrigued. The bad news is, whatever concoction of carpet cleaners I used in my car altered the color of the floorboard carpet. I need to see if I can make my peace with it (it is mostly covered by the car mat) or if I need to get it fixed.

Since the gin & vodka debacle of Thursday night, I decided today would be as good a day as any to partake in my Total Body Cleanse concoction I purchased from GNC a few months ago. I mixed up a tasty cup: 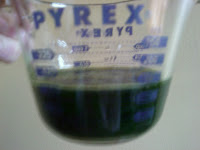 Um, good! I actually managed to drink this green frog-juice down but fear I will not be reaping any of the benefits of it because I’m supposed to drink 4 of these in the course of the day (not to mention 2 days in a row) and I just couldn’t do it. One was all I was good for. It had a surprisingly not bad taste, but the looks were hard to overcome. I have’t had any magic cleansing poops yet. I think the gin & vodka probably took care of anything that was bottled up inside me anyway.

So it was a week of poopy fish water, staying at Kenny’s pooping exit, and drinking a pooping potion.

Tomorrow’s Easter and the plan is to have the Home Town Buffet with Kenny’s family and my Grandmother. She’s contingent on the weather, I believe. She won’t want to come out in this mess.

Kenny had a show tonight at The House of Blues and he saw noted Cleveland Author Rob & his bride Beth at the birthday celebration.

I bought a new book called A Long Way Gone and just started reading it. It’s a true account of a boy in Sierre Leone who was forced to become a soldier at the age of 13, was rescued by UNICEF at 16 and repatriated back into society.

My toe hurts from our Thursday night frolics, I was in bad shoes that rub on my once-broken toe and it’s still tender. I have decided to throw them out, life is just too short to wear painful shoes. They always irritate my little toe, but I can usually get through a workday in them, but not an evening of shenanigans. Today I did a little online shopping and bought 2 new pairs of shoes from Nordstrom, finally using my birthday giftcard from my girlie-friends. Thanks girls – and my feet thank you! And I’m happy to report the giftcard went through without a hitch – which isn’t the same for the Visa giftcard I’m still fighting to use. It gets denied everywhere Visa is supposed to be taken. Sure don’t hear that in the advertisments!

We booked Vegas for the 4th of July, got a GREAT deal on airline tickets. They went down significantly in price since Thursday, I paid $238 a piece with great flight times through Continental. We’ll be there July 4th-7th if anyone cares to join the adventure. 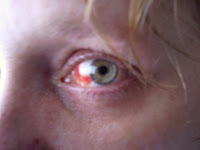 That’s the wrap-up for now. I somehow managed to burst a blood vessel in my eye, so I’m looking particularily fetching at the moment.

Have a happy holiday weekend, stay safe and warm.