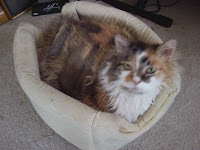 I rarely capture a photo of Newfie, but here she is to say Hello. Not that she runs fast or anything…she doesn’t, she plods along through the house, but she rarely participates in looking up for a photo. Too much effort, I guess.

Sunday is a big day for catnapping at our house. Everyone’s down for a nap by 2:00. Twinkle is in an Avon box lid that is there for the sole purpose for napping cats, and Stanley & Caesar were cuddled up in the paper-like stuff that was covering the furniture when it was delivered. The cats enjoy these things so much, I don’t have the heart to throw it out yet, even though it’s mucking up the looks of the place. But I guess I’d rather have a place that was enjoyed rather than a Better Homes & Garden room. So for the time being the box lid and the white fluff stuff will remain on the floor. There’s just still too much enjoyment of it to just pitch it out. 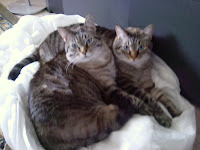 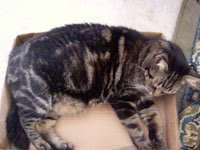 It was a beautiful Spring weekend in Cleveland. The hyacinth’s and tulips are abloom. It makes me a little sad because I used to love my Cleveland yard as I had planted many bulbs over the years and it always looked so pretty coming up. But I discovered some bulbs in our backyard and clipped one and put it in a jelly-jar near the kitchen sink. Home is where you make it. I did spend the nice Saturday clearing out some of the leaves from the Fall that didn’t get taken care of and pulled some of the weeds in the front flower beds. Getting it ready to go in advance. I am a little hesitant to do too much because Timmy is territorial about the yard work, but there’s more than enough work for two people – I just wanted to 1/ get a little fresh air and 2/ get a headstart on Spring. It will be here in full-force within a month. Yippee! Spring just smells like a promise. I’m ready for it and am getting a bit antsy to find a new summer hobby.
Kenny’s told me he’ll golf with me this summer, which will be good since I didn’t line up a golf partner for this year and won’t be playing on the work league. No big deal as long as I can get out there a few times a month during the summer. Some other couples are ready to play with us as well, so it should be a fun season.

It was a pretty quiet week, I came down with some type of a cold/cough thing and was sent home from work on Monday by my boss. I was really sick, shouldn’t have gone in to work but didn’t want to be sick since I am still new. I missed Tuesday and probably infected my whole department, which they’ll be happy about. I’m sure the first sneeze will be blamed on me, and probably rightfully so. Feeling better now, but still have a lingering cough and occassional sneeze, which for some reason I have seem to have forgotten good manners where sneezing is concerned. I have developed the habit of just letting it all out, sneezing on everything in my path, without even a hint of an attempt to cover my nose/mouth. I’m not sure why, other than if I don’t have a tissue, I don’t want to get my hand all wet. Kenny has been directly sneezed on at least 3 times this week. He’s not happy about it and I’m not proud about it. It just is.

It was a movie-filled week with us overdoing it, even by our own standards. We had date night on Wednesday (even though I was still a little under the weather), seeing The Last Mimzy, which was a family movie. It was forgettable, but not horrible to sit though. Today while the cats were napping we went and saw Blades of Glory, the funny skater movie. It had a few laugh-out-loud moments so it was worth it. After that we had an ice cream from Dairy Queen and went to The Exchange Place where we picked up four movies for about $5 each. We got Casino Royale, which we watched tonight and LOVED, and he is by far the sexiest James Bond ever – I was totally digging him and have a little crush. He’s foxy. Even more foxy than Sawyer from Lost, and I didn’t think that was possible as he has been my #1 for a while now. See, everyone’s replaceable! But look at him: Can I be blamed for being fickle? 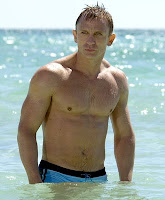 Kenny has blond hair and blue eyes like James so I don’t know why we can’t tweak him into the shape of Bond. Sort of like a Bonsai Tree…..he just needs to be groomed and trimmed into the shape of a Bond 🙂 He could be my Bond-sai tree. Wow, that’s a bad pun!

On that note, I will bid you adieu. Enjoy the week!

I need to add these items to the week’s worth of news, I guess I wasn’t quite done.

1/ Geri & Rusty are on vacation, they went to Cheeca Lodge & Resort in Florida. It’s quite pricey and when I spoke with her on Saturday she was very dismayed with her accommodations and they were planning on leaving Sunday to go to Hollywood, FL and switch their stay to the Hard Rock, which happens to be the same one where Anna Nicole took her last breaths. Cheeca had a hard time agreeing to refund their money, they told Geri that their policy was non-refundable reservations, and she informed them that their policy should be “Nice Rooms.” I found that very funny. She was like a barracuda and refused to hang up with the manager until they agreed to a refund for the 2 days they didn’t want to stay there. My question is, how can you make a “non-refundable” policy – if that’s the case, I told Kenny we should create a website showing some swanky resort, take unsuspecting person’s credit info when they call to book it, when they arrive show them to a cot in the basement, tell ’em “Sorry, it’s our policy of no refunds.”

2/I know I said in my last blog I was going to let the small things go, but here’s just one more example of people trying to just take money from you: I received a $25 Visa giftcard for my birthday and went to use it last Friday. It was declined, so I called the number on the card to try and figure it out (it hadn’t been used before) and after the call, where it was established that they often times are declined and the merchants have to enter in the card number manually, I found out my balance was $24.50. They charged me 50-cents for the call. Once I do use the card up I am going to call them every day for a week and ask for a balance inquiry. They can charge the card all they want then.