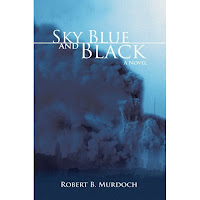 Well, here it is! For the first time in paperback, my friend Rob Murdoch’s book, Sky Blue and Black, is published and for sale at Amazon.com, as well as a few other website venues. Amazon will take you to all the other stores if you’d like to check out the work of a local author and support his writing endeavors. Who knows, you just might even end up enjoying yourself! Rob is a good friend of mine, I use him as an outside sounding board for all the quirkiness in my life and he usually helps see things as they are and not clouded by emotion. He’s also my inspiration for starting my own blog, trying to finish reading a classic (The Great Gatsby) and one day writing my own story. He’s bet that I will be no further along with my own book by the end of 2007 than I am currently – which is nowhere except in my mind. Just to prove him wrong I will motiviate myself because I derive great enjoyment from telling him to suck it. That will be one of the dedications in my book, when – not if – it gets written: “I’d like to thank my family and friends for supporting me, but most of all I’d like to tell Rob to suck on this!”. Classy opening for my book.

Top ‘O the Mornin‘ to all you Irish and wanna-be Irish folks. I am neither Irish nor a wanna-be, I don’t get all caught up in the celebration festivities. I do use it as an excuse to have my once-a-year corned beef sandwich and for putting an extra dose of Irish Cream in my coffee. But I am happy to say that I don’t need to participate in a Kegs & Eggs breakfast extravaganza or go stand in the cold to watch a parade. Kenny rates the celebration right up there with Flag Day.

We celebrated the day with an early supper at Kenny’s grandparents house. I look forward to going over there for a meal because there is always some type of jello dish served with every meal – and they are always my favorite part. Yesterday’s jello dish was Pretzel Salad, which is one of my favorites.

Kenny’s mom Linda purchased a Nintendo Wii game system and we hooked it up yesterday and played for about four solid hours. Kenny showed Marge (who’s 88) how to do it and she was a Wii champion by the end of the evening. 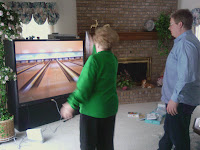 The four of us (Kenny, Linda, Marge and myself) took a “Wii Fitness Test”, which is a segment the game offers. You participate in a series of short tests for three different games and it assesses an “age” for you based on your stamina, strength and balance. The games were bowling, baseball and tennis. Let me tell you, I was winded! My Wii Age came back as 71. I have the stamina, balance and strength of a 71 year old person. Linda outperformed me at 67 years, and Marge – who, let me state again is 88 – beat us both and was rated as a 65 year old. Kenny was standing near the phone because he just knew he was going to be making a 911 call that one of us had thrown ourselves into the television. He did take the test and came in with a Wii age of 29. It’s so nice to be dating a younger man! He, of course, is stuck with a 71 year old – poor him. This little exercise reinforced the need that I need to continue Walking My Way to Fitness each morning, as I’ve been doing for the past week before work.

Timmy and Kenny took an overnight boy trip to Detroit and Windsor Thursday/Friday. They had a good time, but did not have one bit of Irish luck smilin’ down on them. Kenny spent …. well, more than he would have if I had been with him, because I would have pushed him off the chair at the card tables and put a barstool leg through his skull to get him to stop. That’s why he needed a trip with another boy – so he could be in charge of himself without me yelling at him, which is what happens just about every time we gamble together. Timmy, on the other hand, got yelled at when they came home. His girlfriend Tina had a complete meltdown which I witnessed firsthand when she came over to the house on Friday and dropped off his “bag of broken love dreams” – tokens from their romance – because he wasn’t home by 6:00 p.m. on Friday. She was an hysterical mess and I of course told her she was acting insane, which didn’t do much to ease the situation. I’m not always known for tact. But it was an interesting situation to watch, and it made me so glad to be where I’m at in my life: secure enough with myself and respectful enough of my partner to live life without jealous tantrums. Good Lord, it was painful – yet good gossip – to watch a 40-year-old woman acting like that. She needs Rob in her life to tell her she’s acktin’ a’ foo.

That’s it for the week. Still lovin’ my new job, renamed my fish Sushi, still working on invites for my grandmother Sophie’s birthday party in May, and finishing up my taxes. Just a nice slice of ordinary life and I couldn’t be happier.

Peace, be safe and secure with who you are in life!