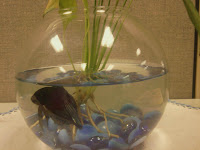 It’s been a busy couple of weeks, which seems to be the norm in my life anymore. I don’t have quiet, uneventful weeks anymore, which means I must be quite busy living life. I started full-time in my new position at work as a Product Insights Analyst. I’ve been very insightful! I do think I’m going to love this job, so far so good. Mimi brought me a cube-warming gift of a new Siamese Fighting Fish I’ve appropriately named Blue 2, since I used to have a blue fish at work. It’s so nice to have a cube again, where I can scratch what needs scratching with a bit of privacy!

Friday night the girls and I played cards at Jill’s house. We had pizza and two varieties of cake – chocolate with buttercream frosting and carrot with cream cheese frosting – to celebrate Sally’s March birthday. Vicky was the big winner and the game wrapped up really early, before 10:00 p.m. It was nice to get home after the long work week and climb into bed.

Saturday night was quite an adventure. Kenny and I went to a bar in Akron called The Barley House, where I fully expected a trap door to open and swallow me for being too old to be in the place. The young lad asked for my ID and I gave him an “I’m 40” reply and he sheepishly ushered me in. I do, however, have a zit on my nose that could assist in mistaking me for being a pre-pubescent teen. It’s a doozy. My story on that – should anyone at the bar have asked – was going to be that I had to remove my nose piercing due to infection. It’s in the prefect spot to carry that story.

Anyway, we went to the Barley House to meet Kenny’s cousin’s ex-husband, who’s a Brooklyn cop named “Murph” and his friend, “Sparky B“. As an aside, Sparky B’s website labels him as “The Glam Slam King of the DJ Ring”. Huh. I had no idea what was in store for the evening…I guess I assumed we’d be meeting at a 40something pub “where everybody knows your name” and not a college kid bar. It was very young, and I was glad I had at least put on jeans instead of the sweatpants I had been wearing throughout the day. Even in jeans I couldn’t have felt more out of place. I quickly downed 3 vodka & cranberry’s to ease the pain and I informed my beloved that we were just staying long enough to not appear rude in front of Murphy & Sparky. They were there DJ’ing, that’s what they do, and why they were in this particular locale. Sparky did give me a shout-out from the DJ booth so I felt almost famous. Murphy was wearing 2 t-shirts, one on top said “Of course I love you, I have a hard-on, don’t I” and the one underneath he proudly showed me said “I’m not a gynecologist, but I’ll be happy to take a look.” I am so, so, so very, very, very glad I am not 22 and dating. Good lord. But Murphy and Sparky were both really nice, we had a few (well, 6 for me) drinks and left by 11:30 p.m.

It seemed to be the week to make me feel my age. Today we had lupper (lunch/supper) at Stancato’s in Parma. They make the best eggplant parm, and well, just about everything else. In the booth next to my table was some couple that I was having a hard time not staring at. The woman had to be in her 60’s, wearing a jewel-red spandex “nightclub” dress, matching pumps and large “Dolly Parton” teased hair. Mind you, it was 1:00 p.m. on a Sunday afternoon. Well, I couldn’t help but eavesdrop on some of their conversation and she apparently had gone to church in that get-up and she was a has-been nightclub singer or something. Kenny said she couldn’t be a has-been, she was more like a “never-was.”

Anyway….she was talking to her very young waitress and mentioned something regarding Jackie Gleason and the waitress said “who’s she, what’s she been in?” I almost spit my water across the table on that one! I think “Dolly” was shocked speechless as well and muttered “Jackie Gleason’s a man.” That was the end of that conversation. Kenny wasn’t at the table when all that transpired and I was excited to tell him all about it. He of course had to say something to the waitress about it and she said she was born in 1987, how would she know who Jackie Gleason is/was. I tried to frame up the era for her with referencing George Burns and that was another one she’d never heard of….I didn’t even touch on Milton Burle. And I noted to self that she was born 2 years after I had graduated high school. Nice. Especially after an evening at Barley House.

There’s so much more mundane crap that happened, but it’s just too much to fit it all in. There were returns galore (yes, girls, I did return the label-maker today!) and I was going to post a picture of my nose zit (caused by some makeup & face lotions I returned to Sephora earlier in the week) but Kenny said that’s evidence of a really poor news week, if I have to post a picture of a nose pimple. Although it is big enough to warrent it’s own paragraph. Kenny was going to name it Doug and asked me if it talked to me ala an episode of Family Guy.

Chris: Doctor, I need you to get rid of this zit!
Doug (Chris’s Zit): You traitor!
Doctor: Whoa, that’s a doosie! I bet some of those awful kids at school call you Zit Face?
Chris: No
Doctor: Papa Zit?
Chris: No
Doctor: Pus Peak?
Chris: No
Doctor: Fat ass?
Chris: Well..yeah..
Doctor: TSk, tsk..oh, that’s terrible!
Lois: (Noticing Chris’ pimple): Oh my God! Look at the size of that pimple, you’re like a circus freak! (Laughs.) Aw, I’m just kidding, it means you’re becoming a man, sweetie.
Peter: Yeah, I remember when I first became a man.
Doctor: The operation was a success. What are you going to go by now?
(Peter looks under his hospital gown)
Peter: Peter…
And……Scene.
Peace, stay safe and enjoy the pre-spring weather!