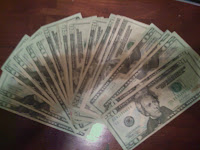 When you think all hope is lost, sometimes you get proven wrong. It’s been three years since I lent a former friend, Lee, a total of $1,100 and I had really given up any hope of ever seeing it again. When I would harass her I would get some of it back, but it was always a production and never a simple payment. It was always surrounded by excuses and promises and disappointment. The last $400 finally showed up at my house Friday night. It was supposed to be left at the front desk at work, but that’s another story. The end result is that I did receive the $1,100 in full, and the best part of it is, when I lent it to her it was “married” money, but the return was all for me! It feels like a little lottery win. A happy ending to this little saga. Lee was always good for some crazy story but the drama and the money just wasn’t worth it. We’ll find someone else to talk about, someone who’s less expensive to have around!


I started training for my new job this past week, working 1/2 days over in my new department. So far it seems to be what I had thought it would be, which is great. I have high hopes that I am really going to enjoy this job. I had to fill out travel information, so maybe there will be a few little work trips in my future, and I got new business cards. That’s quite a to-do at American Greetings, they regard business cards as prized possessions and don’t let just any ol‘ body have them – so I must really be something :)!

Melinda starts her new job on Monday. I’m excited for her, she’s been unemployed for about a year now, maybe a little longer. She’ll be doing menu planning for troubled yutes for Parmadale Family Services, just up the street from where I live. I find it interesting that they hired someone with zero experience in this field, but it’s a Catholic Charities service so they don’t pay dietitian wages for this position. Melinda will have a 90-day training period and then she’ll be off feeding kids on her own. I think she’ll really like it, she likes kids, even troubled ones. Not me, that would be a hell-job for me – I don’t want to deal with a bunch of good teenagers, much less a bunch of “troubled” ones. I think they just need hard spankings to straighten their shit out. Too much coddling, in my opinion. We weren’t allowed to be troubled when I was growing up – we were told to go to school, get a job, suck it up.

It was a quiet week for the most part, and a rather quiet weekend. The house still is in-process for organizing and cleaning, but it doesn’t look too bad around here. Last night we went down to Akron for more games of skill, we certainly can kill a day doing that. It was fun, I won a small jackpot of $275 so I was happy about it. I got an all-screen of black flags. I’m still chasing my Mt. Everest of winnings on those machines, an all-screen of crowns. With a 1-bet (40-cents), the payout for that is $500. Some lady won that last night while we were there. I was bitter that it wasn’t me, but I was gracious about it 🙂 I was using Lee’s re-paid monies to fund my gaming, so now I have a nice little amount for my pooch. 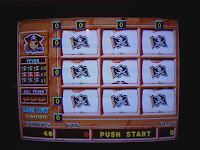 I went to a new dentist yesterday. I have been worried about a crown I have on my lower molar, it has been hurting for about a month now and I imagined the worst. Dr. Tooth (not his real name, but it sounds good!) told me he couldn’t see anything wrong with it so we took some x-rays and I go back on March 8th for the results. I hated my old dentist, he had a full-wall salt-water aquarium and I always felt like he was making up stuff concerning my teeth to fund that little extravagance. This new tooth doctor had a nice old-fashioned spitting bowl and didn’t come up with any ridiculousness concerning my teeth. He did, however, give me the name of a cosmetic surgeon in the event I want to get my teeth veneered to look the way I would like them to look – which, in spite of all the money I’ve spent on them, they don’t. I’ll probably schedule a consultation just to see what he has to say.

This was supposed to be my weekend to detox my body, but I couldn’t commit to a pooping-weekend so the magic liquids I purchased from GNC a couple of weeks ago remain unopened on the counter. It’s a 2-day process, and while I normally would have either Saturday or Sunday to commit to it, I haven’t been able yet to devote both days to pooping. With my public-pooping quirks, I need to be sure I’m home during those days since I won’t use a public facility for #2. In the meantime I’m still toxic inside, I guess. 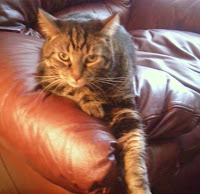 That’s all the happenings from here. Twink really enjoys the new furniture and the ottomon is the only piece that has suffered a back-clawing, which was from Widda. I can’t really hold her responsible for it, she can’t retract her claws on that paw, it’s the paw that was injured when she was a baby and has a couple of toes amputated. So it was beyond her control and no cats have been yelled at so far.