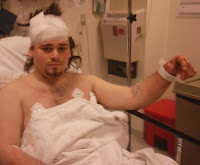 We had a scare this past Tuesday, my nephew Justin was in an accident. He lost control of his Jeep on Parsons Road while he and his friendie were on their way to go sledding or something. Anyway, the Jeep rolled over, landing on it’s soft-top roof. Justin ended up with a cut artery in his head and his little friendie ended up with some cuts on his hand & fingers which required a few stitches. The accident looked a lot worse than it turned out to be, with the trooper who arrived on the scene calling the ambulance and telling them to prepare for a “dead on scene” situation – guess there was blood everywhere and Justin and his friend had climbed out of the vehicle, but then Justin lost consciousness. Every time his heart beat, blood was squirting out of his head, lending a fatal look to the scene. It’s rather miraculous, but both boys got stitched up and were sent home from the hospital the same night.

I was scared to death and had a minor breakdown when Melinda called me at work with the news, but I pulled it together long enough to drive home so Kenny could drive me out there. By the time we got home that evening I was exhausted from the sheer stress of it all – Melinda was holding up very well, considering. Luckily this story had a very happy ending and I think they must have landed with angel wings. That’s my story. The boys, on the other hand, were cooking up their own story to make it even more dramatic – they were corroborating their story and how many times they were going to say the jeep rolled. They wanted to say 8, but Kenny wisely informed them that sounded slightly unbelievable, so they settled on 3 times.

I think one of the most shocking parts of the whole evening was seeing my little baby nephew with hair on his chest. I used to pack him around with me wherever I went when he was a baby – he was my little guy. He shouldn’t have chest hair! He’s still a baby!

Speaking of babies, here’s a picture of Twinkle when he was just a small little fella. 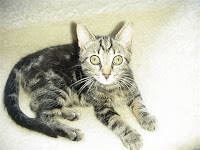 Other than that little slice of drama, it was a rather quiet week. The Baldwin/Anderson Movie Reviewers took in Children of Men on Wednesday evening. We both really enjoyed it and would recommend it, but not for Geri – she would HATE it.

Thursday evening was my planned work soiree, which was my first attempt to pull the girls in my department together a little bit more and help the new folks feel like part of the greater team. The weather forecast was horrible, with “blinding squalls” and “biting winds” on the Dopplar. I sent a formal cancellation notice to the 11 people who accepted the night out, but by 5:00 it still wasn’t bad outside so a handful of us decided to go out as planned. Six of us went to TGI Fridays and we had a really good time. Two newer girls I haven’t had the chance to talk to joined me, my friends Kristen & Emily and my new team member Kristin Barclay. I was by far the oldest in the group, with no one else over the age of 26. They even have young names – Chelsey, the Kristens, Stefanie (with an f of course!) and Emily. I felt like Mrs. Garrett from the Facts of Life. Surprisingly, we didn’t get one free drink all evening. I’m going to have to teach the “kids” how to work it, I guess – that many hotties at one table, we shouldn’t even be opening our purses!

On Tuesday I dragged Kristen & Emily to our first Toastmasters meeting at work. I decided that morning to sign up us, I need speaking/presentation skills on my resume. Kristen has so much public speaking anxiety, she will literally throw up before having to speak. Which is surprising because she doesn’t have a bit of trouble gabbing with me all day! I told her that I refuse to allow that from her, she’s 25 with the world at her feet and I’m not going to let some fear prevent her from being the best that she can. Emily decided to come for fun, so the three of us were surprise guests. We’re officially joining next week and I even talked our department into paying our membership dues for us. So we’ll be official Toastmasters! Now lets see if we can ever grow up enough to stop laughing at one of the other member’s names, Susan Cox. We had a ball with that one (get it…a ball….with Cox…tee hee!!).

Wow, I guess the week was more interesting than I thought – joining groups, car accidents, movies, drinks with girls. No wonder I’m tired by the end of the week.

I hung out at home tonight and watched a tivo’d recording of North Country with Charlize Theron. It was excellent and I recommend it if you get the chance to see it. Kenny’s running Karaoke at Blue Moose, he has his friend Pete going with him so I didn’t feel obligated to go and keep him company. I was happy, I’ve been out enough this week already.

Peace out and stay safe – hope you all have your own angel wings when you need to land softly!