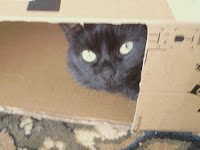 Sometimes you just feel like peeking out at life from the security of a box. At least that’s how Widda feels most of the time. She has gotten my money’s worth out of the laptop box. The hole is where I had to cut out the UPC/Barcodes/Hearts and Livers of the box to send in for my rebate. Which, by the way, I remembered to do and they are both sent off to the respective processing centers. Now I await my refund.

It was a snow-filled week in Cleveland. It started coming down on Tuesday and while it’s nothing compared to what happened on the East Coast, it was enough to keep many of us off the roads on Wednesday. I – along with most of my department – stayed home on Wednesday and did some work on the computer from the warmth and comfort of my living room. It cleared up by Thursday, but it has started to come down again on & off today. Our driveway is heaped with snow on both sides and I feel like I’m driving in a toboggan chute and it scares me. I’ve been having the boys pull my car in & out for me when I’m nervous.

Our new living room furniture arrived about an hour ago. It’s lovely. Like any change, it took a few minutes to get used to the look – it’s very puffy compared to what we had, and much taller. The end tables & coffee table won’t arrive until March 2nd, but it’s starting to come together and is looking rather nice! I need to get some of my pictures out of the garage to hang up, but that’s not going to happen until the snow thaws a bit – there’s a huge embankment blocking access to the garage right now. I’m just a little anxious about the cats mixed with the new leather – I hope they keep their back toenails in and give me at least a few days without any scratches. 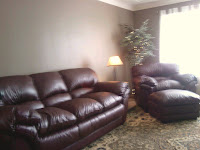 Speaking of pictures for the living room, the little Picasso-like beauty shown here has been a source of contention between Kenny and me. He HATES this picture and refuses to budge on this one – he does not want it hung anywhere in the house where he will be subjected to viewing it. 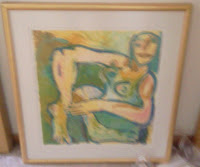 I got this picture from a gallery show at work, my friend Melissa Bollen made it and sold it to me for the cost of framing because I liked it so much. It used to hang over my bed in my past life. Funny enough, it’s one of the four things that Fsteve and I were fighting over during the splitting of possessions era. He wanted it. I refused to give in on this one. And now Kenny wants to put it on the tree lawn. Funny how that works out. Actually, the four things I was fighting for – this picture, my 32″ t.v., the treadmill, and …. well, whatever the last thing was, I can’t even remember – have all ended up as being totally unimportant in my life now. Jill has the t.v. in her attic for future use, the treadmill is taken apart and resides in our garage until we one day, maybe, have space for it, and this picture will probably never again have a place of prominence in a home shared with Kenny. So what did any of it even matter. All the fighting, just boils down to a pissing contest for shit that doesn’t even matter. I have the cats. Those are what I still enjoy and the only thing that truly mattered to me, in hindsight. Ah, well…live & learn.

Saturday was Girl Spa Day. I was too distracted to take pictures of the extravaganza, but it was a fun day nonetheless. We had a bit of a scare in the morning, Rusty wasn’t feeling well and Geri took him to the emergency room/Urgent Care facility so she, of course, missed out on mani-pedi morning. We’re all very – VERY – relieved that Rusty is going to be okay, it was some type of virus. Fran, Jill, Vicki, Kenny’s mom Linda and I all got our fun treatments at the spa and then had a nice lunch at Maggiano’s in Beachwood. I was supposed to get a microdermabrasion treatment with their new “diamond tip” face-sanding machine, but it was broken so they gave me a free $70 EuropeanPlus facial in lieu of this service. It was wonderful, with hot towels, lotions & mini-massages all over my face, chest & arms. It was Linda’s first spa-type treatment ever and she seemed to love it. I treated her to it since she’s always so nice to me. Frannie also had her hair done since she had a fundraising benefit that night, and she looked lovely. Of course, no pictures. Had Twinkle been getting a hairdo, you can believe I would have had a picture – I’ve always got pictures of cats. Here’s a new one of Twink now that I’ve mentioned it: 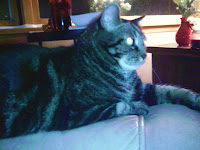 I start 1/2 days with my new job tomorrow – I’m excited and a little nervous. I’ll be glad to get out of my current department, though. My manager had me working on something and on Friday informed me that they were changing the format so there was no need to finish it – which is typical for that area. Very frustrating to know that the time I’ve spent on it was wasted. But I’m leaving so whatever.

We have a 50th birthday party to attend tonight for one of Kenny’s friends. I think I’m going to take a nap on my new furniture so I’ll be fresh for the extravaganza.

Stanley has made himself very comfortable on the new ottomon. He is conked completely out. Like his cat-mama (me!), he loves anything soft & puffy. 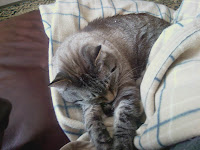 Peace out, stay healthy! I can’t afford the worry-wrinkles.