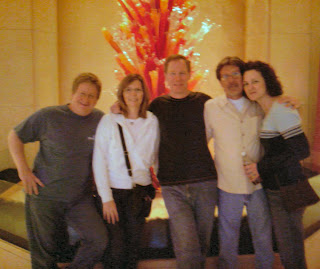 The Bowens, Vargos, Kenny and I flew to Atlantic City last weekend. We got a great deal from Personal Travel Corporation, $250 included two nights at Harrah’s, airfare and all transfers. They took your luggage from the shuttle bus to the room for you, and picked it up out of the room at noon on the day of checkout. It was a very smooth trip, not one glitch to speak of…..other than my luck at the gaming machines, of course. It seems that 2007 is going to continue the gambling trend for me, which is taking all my money, spanking me and sending me home.

Happily, Kenny had much better luck than I; he won $1,200 within the first thirty minutes of our arrival. He was very excited to find his favorite new slot machines were there, the World Series of Poker machines. They are super-fun, they’re regular video poker with a Texas Hold ‘Em bonus game that takes you into a simulated contest against other players. So he was a big winner right off the bat – too bad he isn’t as good at the “saving your winnings” part of gambling. I would be good at that if I ever had the opportunity! Anyway, the two days had quite a few mini-jackpots for Kenny, and at one point he even won $1001 twice on the same machine, which was the best way to do it because both times were under the limit for paying taxes. He did have to fill out the tax form on his $1200 win, and he doesn’t believe in the theory of write-offs so we’ll see if he actually collects his losing lottery tickets for the next year to apply against his winnings. I’m going to bet no. I think that’s one gamble I would win. 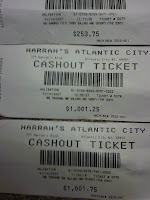 The Bowens & Vargos had on & off again luck, but on Sunday night Rusty found a three-card poker table and settled in for what turned into quite a lengthy ride. Geri had gone to bed and Rusty had text-messaged me, but I was already done for the night as well. So he played alone, and rocked out at that table. He couldn’t lose, and was still there at 8:30 the following morning when Geri stumbled down to find her husband. He was still at the same table, playing two hands at once and apparently treating the cocktail lady exceptionally well – she brought him a cheese & cracker plate! I’ve never been served food snacks at the card tables – Rusty got snacks! It was so fun because that was just above & beyond ordinary service. I actually had the opposite problem at Harrah’s and could not get a cocktail lady to wait on me. I asked for a soda at one point and was told “no, she’s not in my area.” I had to have Kenny get my drinks for me and bring them over to me. And I was gambling – and I would have tipped well!

While on our mini-trip, Dave Vargo mentioned to me that he had started to write a book, about four guys who take a trip to Las Vegas. He said he got the first few pages done, which are actually the hardest in my opinion. I hope he finishes it – Dave, just do it! If you want to be a writer, write. That’s the advice I recently read. Now I have to practice what I read myself. I’ve got my book bottled up inside me and Rob has made a bet that by the end of this year I will be no further along than I am now. I hope he’s not right.

Last night Kenny and I went and killed the evening at our fun little gaming places in Akron. We came out ahead, me by $100 (which I’ll be adding to my trip pooch) and Kenny ahead about $230. He plays much harder than me so his winnings are always bigger. I was very excited, though, because I got a full-screen of pink diamonds on my favorite Queen Bee machine – it’s the 2nd largest jackpot you can win! It actually looks more impressive than it really is, but I was thrilled and it was the end of the night so I took those winnings home with me. The Smoke Free Ohio apparently hasn’t taken effect there yet because I smelled to high-heaven when we got home and jumped in the shower before I even kissed a cat – they would have stunk like smoke had I touched them. Ah well. What’s a little lung cancer compared to the thrill of all pink diamonds on the Queen Bee?! 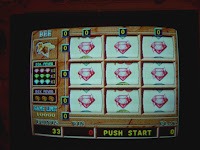 I’m getting closer to my resolutions for 2007. I’ve got some of them narrowed down so far. I think I’m struggling because I’m now 40 and feel the need to figure out what I truely want in life. Not that what I’ve got is bad now, but I need to figure out where I want to go on a personal level and make it happen. First and foremost is getting healthy. Kenny and I actually took the step and went and checked out Omni Gym in Parma yesterday. They have quite a bit to offer, and you can pay on a monthly basis, which is perfect for us right now. I felt a little uncomfortable there and it would definately be stepping out of my comfort zone to join that particular gym. I’m used to ladies only, with a bunch of overweight white women huffing & puffing along. This is co-ed, and much more utilitarian feeling than the pretty gyms with flowers & candles that I’m used to. The Omni is, however, mostly older men and once Kenny pointed that out to me I was better with it. They have a big pool there, which would be good for my crazy back – which, I must mention, is now doing something even crazier and and making my right arm feel like it’s falling asleep. That’s all I need, to have a still-numb left arm, a bad lower back and now lose the feeling in my right arm. How the hell did all this happen? So that’s that. I’m going to wait and see if I become paralyzed one limb at a time.

We had movie night this past Thursday and went to see The Good Shepherd. Wow. I asked Kenny if we could get a refund after the first 40 minutes. I want my 2 hours and 39 minutes back. Not to mention my $8. Frannie had seen it and recommended it, and I’m really surprised she could even follow this movie, much less give it a thumbs up. I think she must have actually seen Blood Diamonds or something and thought she was seeing The Good Shepherd – that’s the only explanation I have for her saying this was a good movie. Throughout the movie Kenny was asking me “what’s happening” or “who’s that” and my reply was the same throughout – I have no idea. More importantly, the movie was so bad I didn’t even care who was who or what they were doing. Baldwin & Anderson give it two big thumbs down – WAY DOWN.

Work was work this week. I took the initiative on Friday and sent out a dinner/drink invite for all the marketing analysts & program administrators in my department. The whole area is so “clickish” and it frustrates me to watch the new people not get accepeted on a personal level. I really couldn’t care less for myself, I’ve said before and I very much mean it, I know enough people. But I want these new people to find their feet in the company and make friends. I know that my friends at work are one of the reasons I love going there – if I didn’t have my group of peeps I would be so unhappy. So far I’ve received a pretty good response for next Thursday.

I’ve taken this one step farther and sent an email to our Product Managers asking if we can get permission to leave early one day in February so I can organize an afternoon of bowling – without bosses. I think we need a social activity, even though I can’t play myself because of my arm/back. I’ll tell you what summed up the department mindset: I included our department secretary on my dinner invite and she emailed me back with the message “how fun! are you sure you meant to include me??” I told her of course I did, the people need to know she’s more than just the keeper of the post-it-notes. She gets excluded from all our department stuff and I hate that. She’s very nice with a really good sense of humor – and people need to know that. I guess I should have been a cruise director.

Kenny’s computer died on him this week so we’re sharing my laptop until they either repair it or declare it dead. It’s hard because he’s sitting around looking at me as I blog. I told him to go and read a magazine or something. Moments ago he asked me if I’d like him to whip up something for breakfast. I said sure, and he’s now in the process of whipping up breakfast at Pappou’s for us. He’s showering, that’s his prep work. So I need to go and throw my hair in a ponytail and get dressed so we can head out for his version of home cookin’.