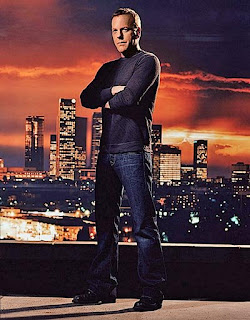 Holy Hot, Jack’s back – and looking better than ever! Four action-packed hours started this past Sunday and even though we were on a long weekend trip to Atlantic City, the Bowens, Kenny & I took a time-out for some Jack Action Sunday night. He didn’t disappoint. Those who don’t watch are missing the best show on network television. We were on the edge of our seat. I was so hyped up after the first two hours that I tried to do a karate kick to show how I would fend off a terrorist (of course, my first plan of attack would be to bite the ol’ jugular, ala Bauer). Anyway, I apparently forgot who I am for a moment and as I raised my leg into high-kick position, I lost my balance and fell into my suitcase. Agile like a cat, that’s me!
Peace out – Atlantic City update to come later. It’s a big t.v. week for me – yes, I know I should do something more productive with my time but I LIKE t.v. – so Rob, suck it.