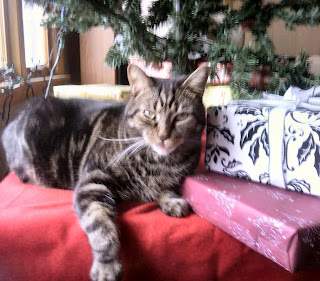 Christmas is over and the New Year is almost upon us. Twinkle is going to be very sad when the tree comes down – he’s gotten his money’s worth out of it for sure. I left him a little cat spot so he could still lay under the tree once the presents were underneath. He enjoyed it.

We had a quiet holiday, with dinner at Kenny’s grandparent’s house. The picture is of Kenn

y’s mom Linda and Grandma Marge. My grandmother Sophie declined the invite this year, she wanted to stay at home. I figured at 89 she can make up her own mind and I didn’t harrass her to come with us. I visited her on Tuesday, the 26th, taking her two plates of leftovers and we went to the cemetary to place flowers on my mother’s gravesite. My mom died in the early morn of the 26th eleven years ago. Eleven. That just seems so long ago. So much has happened in the past 11 years, nothing is even the same as it was when she was around. People have come and gone into everyone’s lives since then – if she returned today she wouldn’t even know many of the players in the game anymore.

This is definately the time when we sit around and think about all that has happened in the past year and make resolutions on how to live a better life in the New Year. Everyone views it as a fresh start, but really it’s no different than December 30th or any other day that has passed. But we approach it differently, with new hopes of living our best life. I was watching some chick on some show this week who is some sort of life coach. She said to make an inventory of everything that happened in the past year – including vacations taken, new jobs, fun events, anything learned, the good and the bad – and see what you can channel into the New Year to make your dreams and desires happen. I thought that was a pretty queer exercise at first, but I probably will do it anyway. A lot happened for me in 2006 – with the best thing being reclaiming my name. I’m not sure what my resolutions will be for 2007. I mentioned becoming more ladylike with less use of the word “Fuck” and the girls laughed at me and wanted to take bets on this one. So I said, “fuck it” and will think of some other resolution!

For Christmas Kenny got me a mall gift card in a ridiclously large amount – it would have been cheaper to get me the Tiffany necklace I pointed out to him. He also got me a new Garth Brooks collection, a Happy perfume gift set and an assortment of Elvis DVDs. He knows I watch all the Elvis shows whenever they’re on television as I sing very loudly along with them. Now I’m all ready for Elvis Birthday Remberance Day on January 8th. It will be tough to decide which DVD to watch! 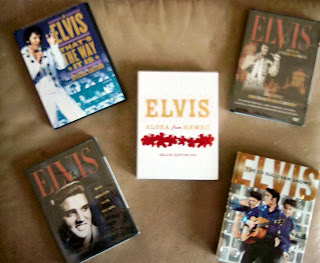 Last night was Holiday Card Night at Jill’s house. I got to see her new pup, Gracie, for the first time in person. She’s a little black cutie. I still think Jill should have named her Cracker – or even better, Glitter like her mother suggested! I still think the cutest dog name is Marlene’s Trinket. If I get a new dog and it’s small I’m going to name it Trinket. Or Fonzie.

Anyway, I digress….We had our largest crowd ever at cards, with 8 of us showing up to play. Jill, Geri, Frannie, Sally, Meggan, Barb Gondek and Chris Carroll and myself – it was quite the event! It was a white elephant gift exchange and I got first pick. I just happened to be wearing my bedazzled cat sweatshirt that Kenny’s mom got me for Christmas so my “gift” couldn’t have been more fitting — a bedazzled watch with a black plastic band.

The origin of this grand gift came from Len’s mom to Jill for Christmas. I was looking sa-weet! When I got home and showed it to Kenny he said he really liked it, which reinforced my decision to never let him buy me jewelry since he thought the Tiffany piece was too ugly for him to purchase, yet this little beauty got the A-Ok.

Geri got another great gift item, two things she really loves: a candle and a photo frame. Those who know Geri know she hates anything with a scent and never takes a picture (unless it’s with her phone), let alone frame one. Jill’s prize was a ceramic Victorian shoe in cream and pink, with a little gilt on the heel to jazz it up, and a pink candle to sit inside it.

Fran received a salt & pepper set of, they say, Scrooge & his hat. I thought it looked like the little Monopoly man’s head and his hat. What ensued next was a great debate on what the little Monopoly man’s name is, with my stating it was “Uncle Rich”. Jill called me a jackass and said it was “Uncle Sam”. While neither of us were right, I was definately on the right track, with his official name being Rich Uncle Pennybags, as confirmed in the attached link. So, HA! Who’s the jackass now, Jackass?!! I defy everyone who saw the supposed Scrooge S&P set to tell me it doesn’t look like this little guy’s head and his hat: 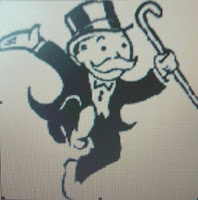 So suck on that!

Stanley’s sleeping beside me while I write. Kenny went to deliver some discs to his friend in Columbus and I stayed home to clean up the house from the Christmas ruins. We have shit everywhere once again. Between my boxes of Avon stuff, the Christmas gifts and wrapping accourterments, and the new surround sound system Kenny’s working on installing, the living room is a trip hazard. Rather than cleaning I’m procrastinating….m

Mimi had surgery on her lady bits this past Thursday. I was surprised to learn this morning that’s she still in the hospital and won’t be coming home until Monday. I thought she’d be home within a day. I hope they got her all tuned up and she has a very healthy 2007.

That’s actually my main goal for 2007 – to get back into good health. First and foremost is to take care of my nerve problem in my back, which is, at times, debilatating me. I missed another day of work on Thursday because of it – I just had no strength to support myself in my right leg and the pain was biting. I’ve committed to the chiropractor’s schedule for treatments and have seen him three times this past week. When I went to see him I burst into tears in his office when he asked me how I was – it hurt that much. I’m now on some new anti-inflammatory, combined with muscle relaxers and Vicadin to help me rest at night. It’s quite a combo, I feel as if my stomach lining is being eaten away. So for 2007, I am resolving to do whatever it takes to not be the Chronic Pain Girl. I’m not allowed to do any type of exercise – not even stretching – until I get the go-ahead from Hot Dr. Golsch. Yes, that’s his official name. Challenge me and I will find it on the Internet and prove you wrong! Good thing Kenny and I were too lazy to join the gym.

I hope you all have a Rockin’ New Year’s Eve. Kenny’s group The Nitelites are performing at Swingo’s on New Years Eve so I’ll be hanging out there if anyone’s at loose ends and looking for something to do. I just might even tongue-kiss ya at midnight!