What I’m about to show you, Reader, requires a level of #1/ awe and #2/ appreciation for the skill involved to compile an arsenal of quarantine necessities the likes you can only image.

Acquired in a short time, Reader, and under situations of duress; yet I persevered, I can assume much like my grandmother during the Great Depression

We realized we were not prepared for Hunkering Down at Chez Bang Bang.

We had no great stocks of canned goods, frozen foods or meats.

The past year I had been using up what had been collecting over the course of time in our pantry, and as a result I was left with basically a rather large stash of canned beets as well as no less than five boxes of graham crackers, purchased when and for what I do not know.  We don’t eat graham crackers on any sort of a regular cadence. We never even ponder opening up a box of graham crackers, yet there they were, loaded into my pantry.

But as I said, the actual groceries were being used up, because money was tight for the past year, then I moved for seven months so nothing new was added, and once I came back home I was still working on the process to use up what was already paid for.

So the pandemic caught us a little short in the pantry.

And there was a need to restock.

I had no intent to Panic Shop. Panic Shopping is ridiculous, we have goods, this isn’t Russia for crying out loud, where we are going to be standing in miles long lines for our allotted loaf of bread.

But something about seeing all those bare shelves — I don’t know, it had an effect on my brain and the Hunger Games flashed through my mind and the next thing we knew, we were making all sorts of purchases that included THREE PIES because they were TWO DOLLARS each and when they’re two damn dollars, you don’t have to decide between peach or strawberry or blueberry, you BUY ONE OF EACH, OF COURSE YOU DO!

And then there were the 3/$10 ice cream because we already have the PIE in the cart, and don’t forget something chocolate, that would be shameful, and also what about BREAKFAST, so in came the donuts and the windmill cookies and all that is good and fine. Then the St Patty’s Day cookies were a DOLLAR and in the spirt of BALANCE we picked up salty evening snacks, too. 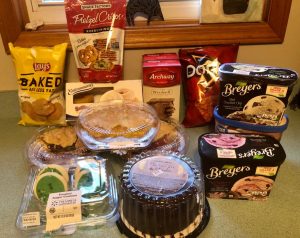 And that is how we came to have an abundance of cakes and treats because of the damn CHINESE VIRUS* so basically they are too blame when fatty fatty two-by-four can’t fit through the bathroom door.

*I could get started on that, but i won’t and instead will just use an entire population as the reason i’m fat. and diabetic. hey, if it’s good enough for the president to take zero responsibility, then it’s good enough for me. i’m going to also rate myself a ten. so there, easy.

Except I can still fit through the door and I weighed myself this morning and actually lost a pound so jokes on all you dieters, because basically worry uses up a lot of calories and I’ll be skin and bones by May if this keeps up.

I’d invite you over but you know, keep yer filthy germs to yourself, Reader.