Rather than leave a little bit of a bummer of a post up there to greet your week, I’ve decided that in the spirit of New Years Resolutions, we’re going to have a toss-back (it’s a little more gentle than a throw-back) to 2012, when I tried and reviewed The Easiest Diet in the World.

Now, fast-forward 5ish years, and I’m tackling a new diet once again, The F-Factor diet. We’ve only quasi-adhered to it for four days, so no official results yet, although it does seem relatively easy. Maybe because I’ve only quasi-adhered, and the quasi allowed movie-theater popcorn, drinks, mexican food, brownies, etc. I’m having a soft start, to ease into it.

Because I do care about you, Reader, and if you’re looking for a little Health & Fitness jumpstart, here’s a little diet plan you may want to try yourself. It was a popular ‘Cleanse’ diet, with bananas and other stuff.

Here are the results:

About that Cleanse. “How’d it go?”, you may be wondering. Firstly, let me acknowledge that this probably has a whole lot of wrong punctuation going on right there in that last sentence. Whatevs.
Here’s the breakdown.
Monday- Fruit Day
Starting strong. It’s an all-fruit day (sort of like an all-skate at the roller rink, but not really like that at all). Except for bananas. Banana’s apparently don’t know how to skate.
I prepped for the day the night before (good job, Me! I’m normally not an advance-planning person, but I Meant Business). Strawberries hulled and washed, blackberries cleaned (they were cheap and good from Sam’s Club), a couple of tangelos/cuties as they are now called, and a couple of apples packed up in my to-go bag. I also made a fruit smoothie in the morning with all my Juice+ vitamins added in for extra kapow. The smoothie was an apple and a couple of handfuls of frozen berry mix (blue/black/straw/rasp), add water and blend-blend-blend. It was good, albeit a little tart. I would have added a packet of Truvia but ran out and really don’t love grocery shopping so it wasn’t worth a trip. It’s the Juice+ that makes it a little tart, but palatable nonetheless.
And then I got to work and discovered that I had a lunch engagement with some friendies. Eh boy. Trouble.
After lunch I sent Kenny the following text: “If fried fish and pierogies count as a fruit, than I’m tracking to plan today.”
Dinner was an apple and a cutie. Not a person, a tangelo. My lunchtime “fruits” really kept me filled up, so it was pee-lenty.
In the evening I cleaned and packed my food for the next day. Veggie Day.
Tuesday – Veggie Day
Sliced up carrots, browned up some canned diced potatoes with an onion and a bit of Mrs. Dash seasoning, canned beets, and a can of green beans. Sounds questionable, but I figured I could supplement it with a salad from the cafe if needed. And it was a Toastmasters-during-lunchtime day, so I figured I’d have no troubles staying on track. No lunch dates to foil my attempts, just an innocent Toastmasters meeting, whereas I have my lunch quickly at my desk afterwards as the meetings are from 11:30-12:45. No time to fail with that schedule.
Except.
Toastmasters was a “special event day” and there were a lot of snackie-snacks brought in for the celebration. I had forgotten about that.
After lunch I sent Kenny the following text: “If crushed up Oreos mixed with cream cheese, rolled into balls and dipped in chocolate count as a vegetable, then I am on track today.” 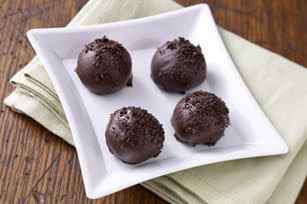 Because 2 of those balls leaped from the plate and were between my lips faster than Ryan Gosling’s …. er… nevermind, sidetracking. But anyway, they were in my mouth and having a party.
Dinnertime was something vegetable-y for me. More carrots, and I think some of the potatoes, but really the potatoes weren’t that good – they do require oil to make ’em crispy and delicious. I would have loved to have had a baked potato, but I didn’t have any of those on hand. Remember, I’m a pretty lazy shopper.
Kenny’s response to my text message: “If red velvet cake counts as a meat, you’ll be good to go on meat day.”
Wednesday
This day is supposed to be fruits and vegetables all the live-long day. No problem-o. I have plenty of strawberries, carrots, blackberries and whatnot. I opened up some canned pineapple for variety.
Hell, I don’t even remember what we ate/did that day. I remember getting home around 9 p.m. That’s about all I know. Maybe I ate on track. All I know for sure is that by now I’m watching the bananas (16 of ’em, I bought in anticipation of Kenny eating 1/2 of ’em) ripen and hoping that they slow it down until I get to potato & banana day.
And then I re-read the plan and realized there is no potato & banana day, just a banana and milk day.
Sonofabitch.
I don’t have any milk (or any more potatoes for that matter. Thanks, Bad-Grocery-Shopper Me).
I start off the morning with a banana. It’s good. We’re on track. Starting strong again. Cleaning the insides out.
After that? Some salad for lunch (lunch option was out of my control that day, it was pre-ordered for me by someone else). And then I had a long day and came home tired and wanted Mexican food.
So I had tortilla soup and it was good. Rice. Which is sort of like a potato, but since it wasn’t even potato day, I guess I can’t even grandfather that in. But the plan did call for that diet vegetable soup on that day, and so I just counted the chicken tortilla soup as a creative substitution. And glossed over the chips & salsa I ate (but really, the salsa could have been for the 6-tomato day plan, I was just a little out of order).
Friday
Weighed myself.
SHOCKED. SHOCKED, I SAY. To report I had lost 4 lbs. I don’t even know.
Friday I ate something, I’m sure. I did have a salad for lunch (a healthy salad, one I made myself from the cafe with no bullshit added to it, the 4 lb. weight-loss spurred me on to a good decision), and some vegan corn soup. Not on the plan, but a good choice anyway.
Then we went to the movies and I ingested a bucket of popcorn. We saw Project X. It was fun and the popcorn was good and a stand-in for dinner. I like to focus on the aspect of the fiber the popcorn provided.
Saturday
Watching the bunch of bananas turn brown. Getting nervous about ’em going to waste.
Re-weighed myself to see if the 4 lb. loss stuck, or if it was just a fluke.
It stuck.
I’m shocked.
Celebrated a week of the healthy cleansing by getting the Colonial Slam breakfast at our favorite breakfast restaurant: 2 eggs, corned beef hash, rye toast, and homemade potato pancake with applesauce. See, the applesauce is still helping with the cleansing. Right?
Dinner was leftover pizza. Which I just remembered, is what we had for dinner Friday night after our movie-n-popcorn appetizer. We had gone to the early movie. We were ready for pizza afterward, at 8:00. And we capped off the pizza with their dessert of the day, Red Velvet Cake, so it was almost like they were trying to help me with the Cleanse since that could possibly count as a meat for meat day, according to Kenny, and I still wanted to achieve success so I had a piece. It was just so-so. Dieting is hard.
Which brings us to Sunday.
I woke up concerned about the imminent demise of the bananas. They were not going to be long for this world. 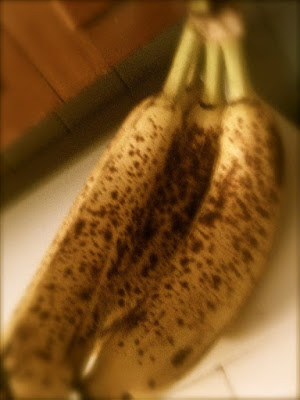 So I did what any good, cleanse-type person would do, and re-purposed them. Into a healthy Juice+ shake. Or a cake. You pick. 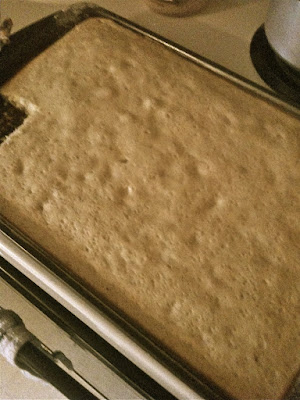 I added the leftover pineapple to it on a whim, and also some coconut oil since I didn’t have butter (again, finger points to me for bad grocery shopping), so this could really count on all-fruit day.
So there you have it. The Cleanse.
I should market this little plan to The Cleveland Clinic, Dr. Oz, the Biggest Losers, and everyone else who thinks they know how to clean out a body. Because this, Reader, is a diet that is really pretty easy to follow. And isn’t that what we all want – a diet that doesn’t feel like a diet, something that can become a lifestyle change?
You’re welcome.