Well, Reader, 2016 started out mean to Chez Bang Bang.  Or it tried to, anyway, but it was thwarted. Maybe The Universe – or a Ghost (we’ll get into that sometime later) – was just trying to challenge me, and used Chez Bang Bang as the vessel to see if I could Man Up and deserve the honor of homeownership.

I’ve got news for you, Universe and/or  Ghost:  I am NOT man enough to own my home.

That’s what husbands are for, of which I have none at present. So stop testing me already. All of  us know I lack homeownership skillz, beyond cleaning up cat pee and sweeping up cat hair.

But luckily I have the pleasure of the acquaintance of HNDYDAN and he’s not only man enough to run his own house, his woman’s house, her son’s house, misc. other houses, but Chez Bang Bang as well.

2016 delivered this to my kitchen: 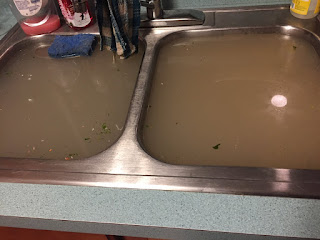 Now, I’m no expert, but I knew this couldn’t be good.

This little treat happened when I ran the dishwasher. My solution was to keep trying the garbage disposal (is it a disposal or a disposer?? I say and type it both ways. Hm.), but that just filled up both sides of the sink.  Evidenced above.

We bailed. Literally. And then I made my plea to Almighty Facebook for advice/pity help, and HNDYDAN came to the rescue.

At first we thought maybe, just maybe, I had ground up the little rubber stopper thingie that sits over the garbage disposal side of the sink, because I vaguely recalled hearing a thumping noise in there when I ran the disposer at times, and we couldn’t find the rubber stopper.

So yeah, HNDYDAN was ready to take away the house from me right then and there.

But then? We found it, so I was redeemed!

HNDYDAN brought the flat plunger, which I learned was needed for sink plunging vs. the ones that are made for toilet plunging. I’m like a sponge, absorbing all this knowledge.

On a good note, I learned the proper plumbing techniques for sink plunging, which is:

Back to the kitchen sink. HNDYDAN got down on the floor, all nimble-like, and disassembled the pipes, only conking his head once on the cabinets. And oh by the way, he only walked once into the closed patio sliding doors, but hey, it’s not my fault – I maintain very dirty windows so that people know they are closed, to prevent walking into them. Or it should. They are dirty for safety purposes, Reader.

I’ve walked into a sliding door once myself, in Florida at my Dad’s, so who am I to laugh, yet I did, but not too loudly because the drain was still clogged up and well, I’m not one to openly laugh (at the time) when I can do it right here on ol’ Bang Bang’s blog so all the world (er, the dozen) can Read All About It.

I’m like the town cryer of trips, falls and window-walkings-into. 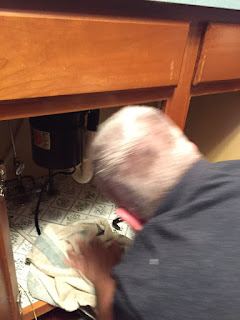 But nevertheless, he got down to business. During the drain-removing process, HNDYDAN made a most unusual request, asking if I happened to have a flashlight.

HNDYDAN: “Move into an apartment. You’re not allowed to own a house.”

But guess what? That iPhone flashlight worked just fine! So ha.

And I did happen to find a proper flashlight, that I believe my brother bought for me, but it needs big fat C batteries which I don’t have, but will get as part of my 2016 Resolutions and for part of my new tv show (see below). Because I guess sometimes you shouldn’t rely on an iPhone light, although I do trust in Steve Jobs.

Anyway, after he conked his head and his face, he pulled out his giant snake drain, which should have done the trick, but didn’t. Chez Bang Bang’s Ghost was still intent on thwarting us. 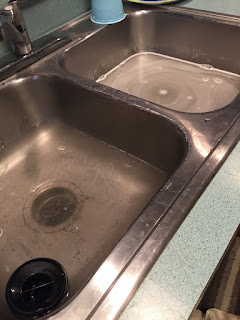 It was time for the Big Guns, meaning HNDYDAN went and rented an electric snake from the home store the next day.

We got started at the crack of noon on Day 2 of HNDYDAN vs. Drains, much to his dismay delight.  And that’s what you get when you come to my rescue on Facebook – unexpected weekend time with me. You’re welcome again.

The Big Gun finally cleared whatever was down there, which we never really did determine what it was, it just must have pushed it on through, and now Chez Bang Bang has clear-running drains once again. 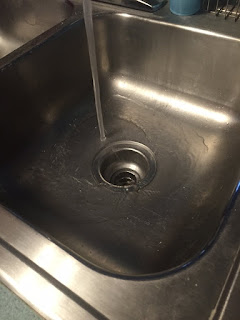 You’d think that would be the end of this clogged-drain story, but it’s not. Because while I had HNDY here, I persuaded him to install my shower head, which has been in the closet for two years, and he took care of that lickety-split. Unfortunately, I was disappointed in it’s performance as it has a gentle rainshower thing and it’s not nearly as pounding as I would like. So all that two-year wait for nothing.
I like a hard pounding in the shower ~That’s What She Said!~
It has three settings, but none of them are aggressive enough for my liking.
I want to feel waterboarded when I get out of the shower.
I want it to exfoliate me from head to toe.
And this new one? It’s just a too-gentle mist and now I have to go and buy yet another new shower head that will give me the pounding I crave.
But! The good news is, I carefully watched the installation process, and I am fairly certain I can do it myself next time. Stay tuned for another riveting blog update next week.
But that’s not all either.
Because I was home sick on Thursday with a vicious little bug and the Ghost of Chez Bang Bang tried to play another trick on me, and jammed the front door lock so I couldn’t open the front door. And another plea to HNDYDAN had him galloping to the rescue later that day.
Me: “I’m going to try to find the WD-40 and squirt it up in there.”
HNDYDAN: “I’ll be over when I get off work.”
Later…
HNDYDAN: “Do you have a key to the door so I can try it from the outside?”
Me: “Yep, but it’s real slippery. I coated it in Crisco because I couldn’t find the WD-40.”
HNDYDAN: ~pained look on his face~
You know the outcome, HNDYDAN took the mechanism apart, tightened up some screws, and now it’s working much more smoothly, no doubt in part to the heavy dose of Crisco I applied to the bolt and in the keyhole. So basically I probably fixed it.
And LASTLY, in the story of How The House is Being An Asshole in 2016:  I got out of the shower a couple of days ago (still unhappy with my gentle rainshower), put my towel back in the rack and pulled the whole damn towel rack right off the wall.
My Mister: “Hulk break towel rack!”
Yep. Hulk broke towel rack.
But guess what??
I must have absorbed a lot of HNDYDAN’s knowledge over the past week, because after several attempts of just trying to mash the metal part back onto the wall, I decided there must be a screw somewhere on the thing and turned the part over and lo-and-behold, saw a teeny-tiny screw!!
So I unscrewed it, and put the towel rack back over the parts still on the wall, and screwed it back in and just like magic, the towel rack was back in place.
Basically, I am just like Rehab Addict’s Nicole Curtis and deserve my own t.v. show.  HGTV,  I am ready for my close up. Despite the everlasting presence of The Nose Dot. Who also might need it’s own contract, I cannot negotiate on it’s behalf. Apparently.
. 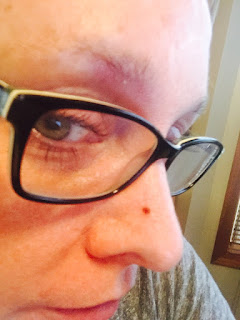 *yet another candid, morning-face, no-make-up, taken-just-now-for-YOU-READER, nose dot photo. And you can see why I need eyebrow filler, and coverup, but do you see those lashes? Untouched by makeup, so yeah. Awesomely long and fluttery. And hopefully enough to distract my television viewers (when I get my DIY Show shortly) from the Nose Dot.  The Nose Dot may have to get it’s own blog if it plans on sticking around all year.

p.s. For you who may be wondering why My Mister isn’t the Man Of the House, he did help with the plunging, but really, he’s a lover, not a fixer. 🙁

2 thoughts on “This Old House”