The Bang Bang Theories
Let's Be Friendies
When exactly did my life become so much fun, Reader?? I think it started back in February when I no longer had to work at Tiny Town. Because while most people would view a lay-off as the most stressful time ever, I look back on 2015 as some of my happiest days in recent memory.
I was just sitting outside this morning, drinking a cuppa coffee and looking at the pretty day and I was so grateful to have this life.
Maybe it’s all in the attitude. Or at least partially in the attitude. But an unhappy work life can create a shitty attitude that no amount of repeating gratitude-inspired mantras can unshit. Or de-shit. I’m not really sure what the opposite of shitty officially is, so let’s go with de-shit. Sometimes it’s tough to de-shit your attitude, despite your best intentions. That’s all I’m saying.
I haven’t had to really work on de-shitting myself lately. I mean, I can still have a moment or three, but for the most part I’m feeling good about everything from one day into the next. It’s easy to be positive, though, when shit isn’t shitty.
So yeah. It’s good to be me.
One of the greatest parts about being me is that I know the greatest people. And one of my people, The Healthy Hoff, asked if she could borrow my house to throw a surprise party for her mama.  Of course I pimped out Chez Bang Bang for Operation 70th.
And then the greatest friend asked the other greatest friend for any ideas for the Greatest Birthday Ever.
After some intense brainstorming, we devised the plan to have an Elvis show up and perform. Because one of the big regrets in the The Hoff’s Mama’s life was never having seen Elvis perform live.
So we brought her an Elvis. Because we’re awesome that way. And I may be just a tich self-serving. Maybe. Just a teensy weensy amount.
It was an epic night at Chez Bang Bang.  Ep. Ic.
Elvis came and performed for two solid hours. He sang and gyrated and took photos and kissed girls and handed out teddy bears and scarves and had the whole room on their feet.
He posed with Elvis Goose, who was properly dressed for the occasion in his white jumpsuit, because Elvis thought Elvis Goose was ah.mazing, which it is because who has an Elvis jumpsuit and cape for their concrete goose? No one except Trixie Bang Bang, that’s who. Because I had this outfit custom made.
I’m even more pathetic awesome than you realized, huh, Reader. 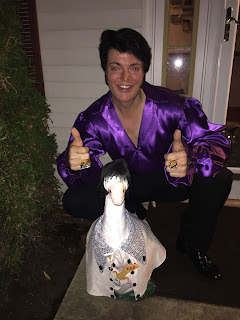 The second biggest star at the party was this little number: 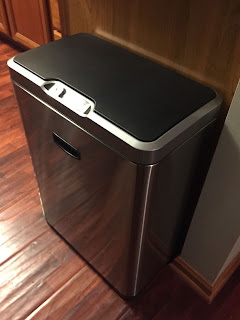 Yep. Our electronic trash can, which became a member of the family this past week.  So yeah, she was a bit of a show-stealer.  I had a basic plastic can for the past two years, and coveted one of these fancy schmancy numbers, but refused to spend $$$ on a trash canister.  Because that’s stupid when you can spend that money on an Elvis instead. Priorities, Reader.

But thanks to our friendly neighborhood Costco, who charged a very reasonable $39.99 for this little beauty, she was mine, all mine.  And several other folks who were at the party and went out the next day and bought theirs, all theirs.

So yeah. It’s a pretty rockin’ time here. From trashcan’s to treasures, we’ve got it all right here, right now.  I hope you can say the same, Reader, and here’s to us all having a de-shitty week.

***This is a little on the lame-ish side, I’m working on getting some creativity back, because maybe my life is so much fun right now that it’s sapped all the words from my head. Or maybe I just need more wine. Probably that.