It’s been a ka-ray-zy month, Reader! Gone by so fast,  I refuse to believe it’s already the 18th of January, except that I have a vacation coming up so I will believe it because that means me & Aruba will be entwined in a steamy love affair sooner rather than later.  So yeah, it’s already past the half-way mark in January.  Aruba, we will be together soon.

Sometimes I don’t know why things work out so great for me, I guess I’m going to go with the belief it’s because I’m such a great person.  You will be hard to dispute that fact, Reader, if you’re here in front of me, because that would just be a show of bad manners so just believe it when I tell you that good things happen to me because I’m a great human being. That’s why.

Example of the great things that happen to me: It was my ‘WE ARE NOT SISTERS!” sister-by-another-mother’s birthday this month, and we got together on Friday to celebrate. During her actual birthday, which she almost had the good grace to share with Elvis, I was in Atlanta getting inspired by martini’s new ideas for work so I wasn’t in town to celebrate her on the day she came out of a vagina.  Or maybe she didn’t come out of a vagina, I’m not really sure of her actual arrival mode, so let’s assume she fluttered down from the heaven’s on angel’s wings, and that’s why she’s an angel here on earth.  That’s a waaaaaay prettier visual. We’ll go with that.

So anywhozle. We finally got together to celebrate her beginning, and SHE gave ME a present. So yeah. Take that, all you lozers who don’t get gifts on your friend’s birthdays. I sort of like this little tradition she started. Let’s hope she keeps it up or next year I’ll be sorely disappointed.

Anyway. It was only one of the neatest gifts she could have given me.  Last time I was at her lovely McMahansion, I noticed she had a new house numbers sign on her house and it was soooo puuurty!

This is what a good person she is: I commented how lovely it was, and she had her artist-friend who made hers, and who happens to have mad artist-type skills, handcraft one for Chez Bang Bang!!

It’s hand-carved out of wood and meticulously painted, with a raised relief so even if you’re blind you can read the numbers. I practiced my braille skills and sure enough, I could tell it was 6000. 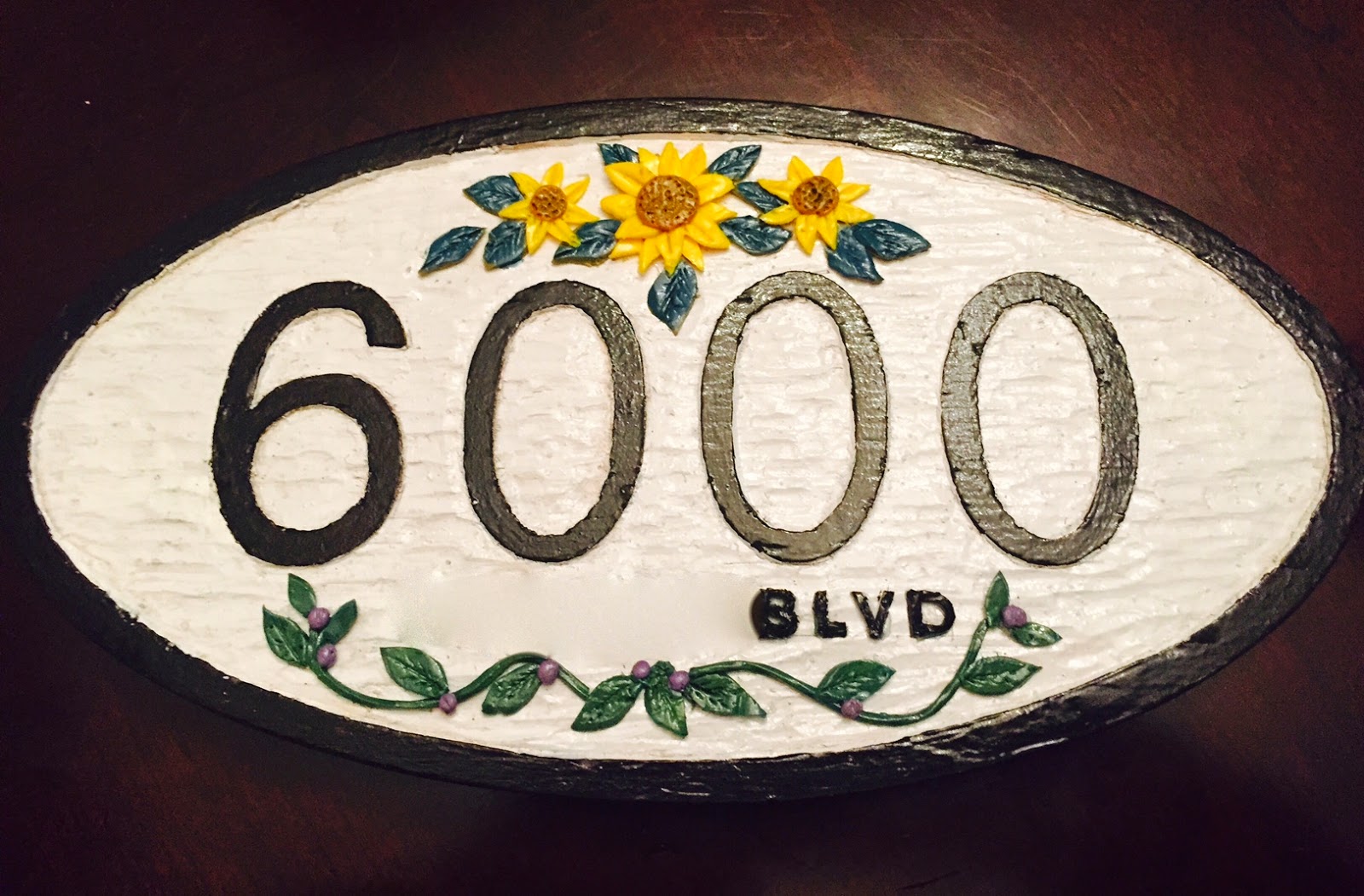 It actually says the name of the Blvd I live on, but ever-savvy-me, I blotted that out because I don’t want to get burgled by some lurker who thinks I have great stuff and wants to burst into Chez Bang Bang and steal cats.

Unless he takes the cat that occasionally pees where he’s not supposed to, because that cat is negotiable.

But I don’t want to take the chance that while I’m being burgled, I also get ass-raped, because that is no fun…I mean, I assume that would be no fun. So good luck finding me, Bad Guys! Er, that’s not a challenge. I have old, bad stuff in the house, including myself (especially myself), none of which you’d want, take my word for it. If you do come to burgle me, I have 8 attack cats on premise. Be warned. And I hope you have allergies.

Back to the original intent of this post, which is to talk about how great I am, so great that I get gifts on my friend’s birthday, so yeah. I’m great.

I think the original intent of this post was to thank my beautiful Sister-Friend (not to be confused with a sister-wife) for helping to doll up Chez Bang Bang, and her talented artist friend for doing the actual work. I sidetrack easi… And now I have a great house plaque so I can always figure out which house is mine when I stumble home drunk. Which happens never, Reader, sheesh. It’s just a jokey. Based on actual events. Sometimes. Not often.