The Bang Bang Theories
Let's Be Friendies
It goes without saying that I am not exactly a crafty person. At all. Back in my olden married days, I had an entire attic of “good attempts” – projects that I wanted to craft & create that never really panned out.
Once I moved I pretty much tossed all that out and realized that it’s better for me to just buy the cute craft I see, rather than spending twice as much on supplies and never having a finished product.
That’s worked out pretty well, but sometimes I still get the urge of “I Can Do It!” and the cycle begins again. Currently in my upstairs closet I have a half-finished bag from when I took a sewing class, a bag of yarn and knitting tools from when I was going to create knitted awesomeness and instead have little swatch of fabric barely big enough to cover a cat, and a cake decorating kit from when I thought it make perfect sense because cake. Until I got so sick of making buckets of frosting to practice with, it almost ruined my love for cake and I shelved that whole thing and kept my cake love pure.
So yeah, not really the crafty person.   Which also lends itself right into decorating, I’m not really much of a home decorator, either. I have things in my home, Reader, but mostly it’s because Vera Wang came here and hung up all my pictures in about 30 minutes flat, or else I’d still probably have naked walls.
We had very little personal items hung up, either. In fact, not a one. So when I decided to create a Wander Wall as my entranceway focal point, I had mixed emotions about it. Because years of failure.  I had spent about $80 on some photos to try to create an interesting wall when you were welcomed in to Chez Bang Bang, but it was three tree pictures and I never really liked them, and no one else ever walked in and said, “Wowie, look at that feature wall!” or if they did they didn’t mean it in a good way.  So it was always sort of “meh.”
Then I went to a friends house and got inspired. She had some quote and her own photos on canvas around it and I thought, “There! That is exactly what I’m going to create on my long wall!”
And then a couple of months went by while I percolated on the idea, finally pulling the trigger on purchasing a $20 wall decal. A wall decal which I frankly wasn’t sure I had the know-how to adhere to my wall. Because craft.
It arrived, and I let it sit in the box for a good month or so. And then one night I said in my brain, “Fuck it, just do it.” And so Kenny and I clung our wall decal to the wall. It was hard. But turned out really pretty great.
And then I considered just letting it sit there, because what if the rest of the idea ended up sucking. But one day I said in my brain, “Fuck it, just order some photos!” and so I did, from Walmart, and started my Wander Wall of some of my favorite photos. 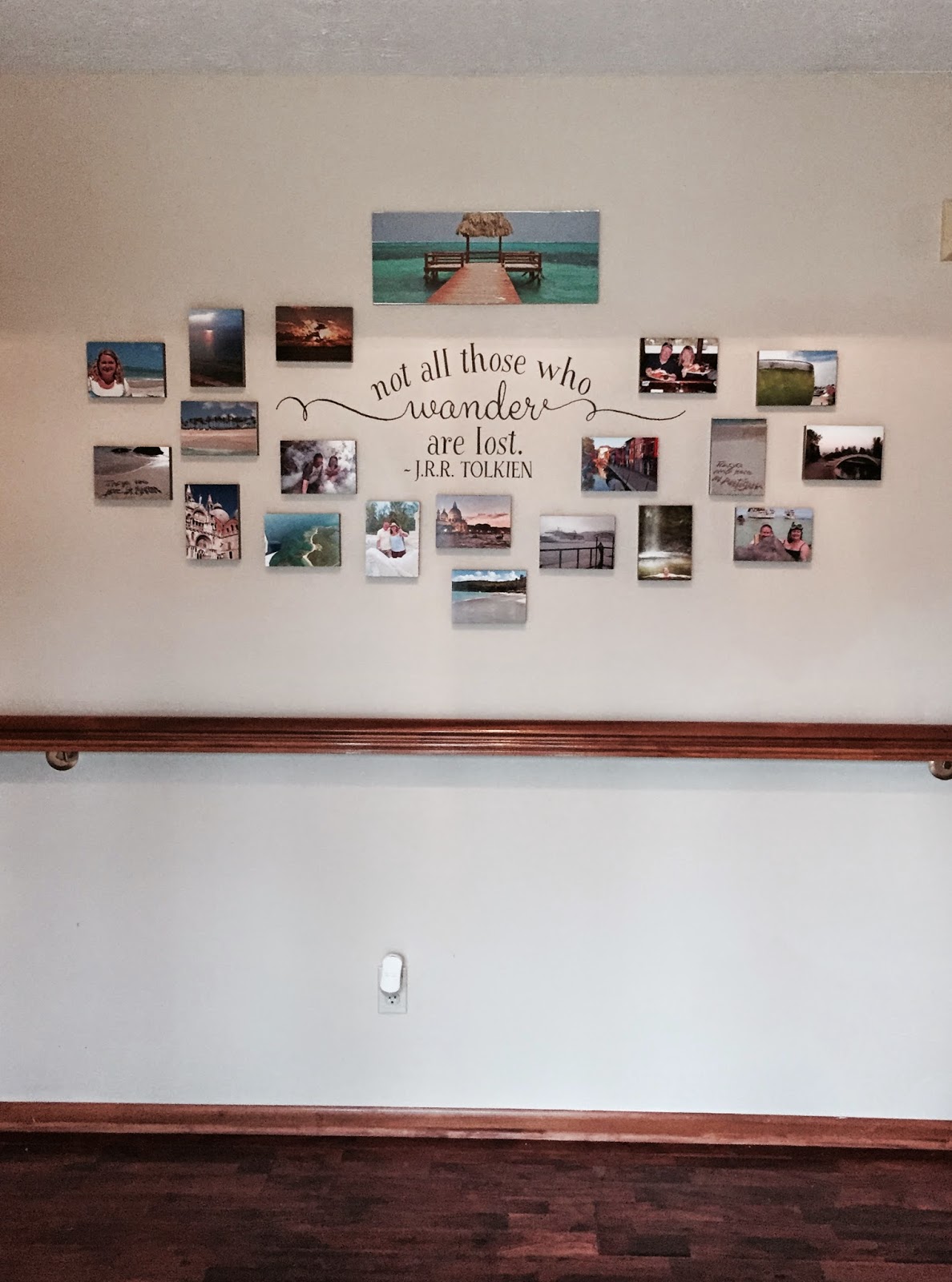 I still have a few more photos to pick up, they are mounted on little square boxes.  And the one at the top is my favorite photo from my last trip with my friendie, from Belize.

I realized that most of my favorite photos involve a beach.

Some of them involve My not-really-my-ex* Mister. Because those times? Were some of the most fun times we’ve had. And they make me happy and smiley when I see them.

*we never really were able to make the break up quite stick, and then I just got tired of fighting it and said in my brain, “Oh, what the hell!” and that’s what all great relationships are based on, right? Right.

So while it’s not exactly a craft, and I wasn’t inspired by Pinterest, I think I’ve created a Pinterest-worthy wall.  And Chez Bang Bang is finally starting to reflect the people who live here, in more ways than just by having piles of cats on the couch.