The Bang Bang Theories
Let's Be Friendies
Oh, Reader. Reader, Reader, Reader. ~punctuates each word with slow shake of head~
This is NOT the blog I had bottled up in my fingers to write tonight. No sirree, there was a whole ‘nother story that thought it was going to be told. But sometimes life just writes ’em for me.
Today was Spontaneous Friday. Meaning, I had no plans for this evening other than squandering a Dog Days summer evening in my pajamas watching Orange Is The New Black, because I miss Piper.
Then I emailed one of my Bests, a.k.a. The Healthy Hoff, and was promptly invited to an adventurous dining experience of a Vegan Meet Up Group. So a bunch of people I don’t know eating a bunch of food I probably won’t like.
Of course I promptly said, “Yes!” to the invite, because The Hoff, and also because my other friendie Katie whom I haven’t seen since For.Ever. was going, too. I figured I could enjoy a salad. And the menu was offering up a beet ravioli in some sort of a cashew sauce. Which, I have no idea how you make a sauce out of a cashew, but I was game., despite the all-too-recent memory of my last vegan meal, a.k.a. one of the Very Worst Things I’ve Had In My Mouth Lately.
Plans were made. Despite a very long Friday at Tiny Town, I made it to the other side of the world to meet up with my Badass Plant Eater friend at 7:00 p.m. 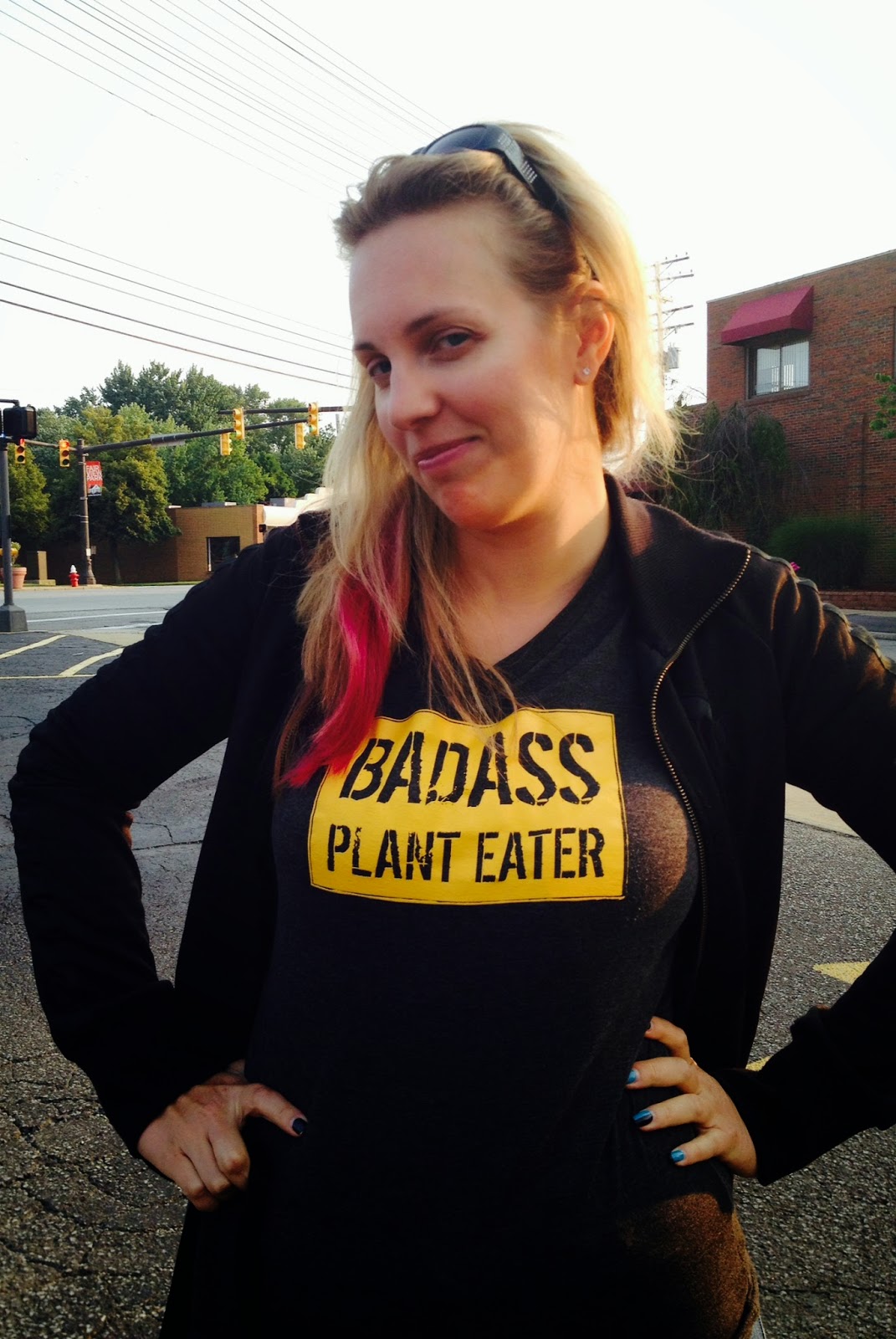 That shirt takes me right back to Pulp Fiction.
“Which one is your wallet?”
Jules: “It’s the one that says Bad Motherfucker.” 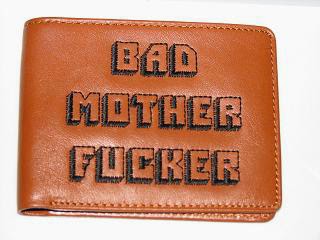 Anyway.
The meal. Well, first off, each table had a platter of crudités  and something that looked like a hummus. Safe enough, right? Wait a second! First, first off, the menu did not include beet ravioli in a jizzy nut sauce. That was a trickster menu on their website. Motherfuckers.
There was also fresh baked bread, which how can you go wrong with that,  and something that very closely resembled butter. In looks, Reader. I was skeptical about the flavor, but I smeared it on the bread and shoved it right in my mouth. Because I’m daring that way.
I ordered a strawberry salad with some sort of a homemade vinaigrette dressing.  The Hoff ordered the Popricosh, which was a veganized version of Chicken Paprikash, only without the chicken or sour cream, or anything that makes a Paprikash a Paprikash. It had vegan spaetzles in it, which were floating around in some sort of a grinded-up nut sauce.
Pretend this meal is a clock, with the bread & not-butter at the top. Then at 3:00 you have the how-can-you-fuck-it-up salad, at 6:00 is the this-isn’t-paprikash-at-all, and then 9:00 brings you the this-is-some-kinda-hummus-for the crudités. 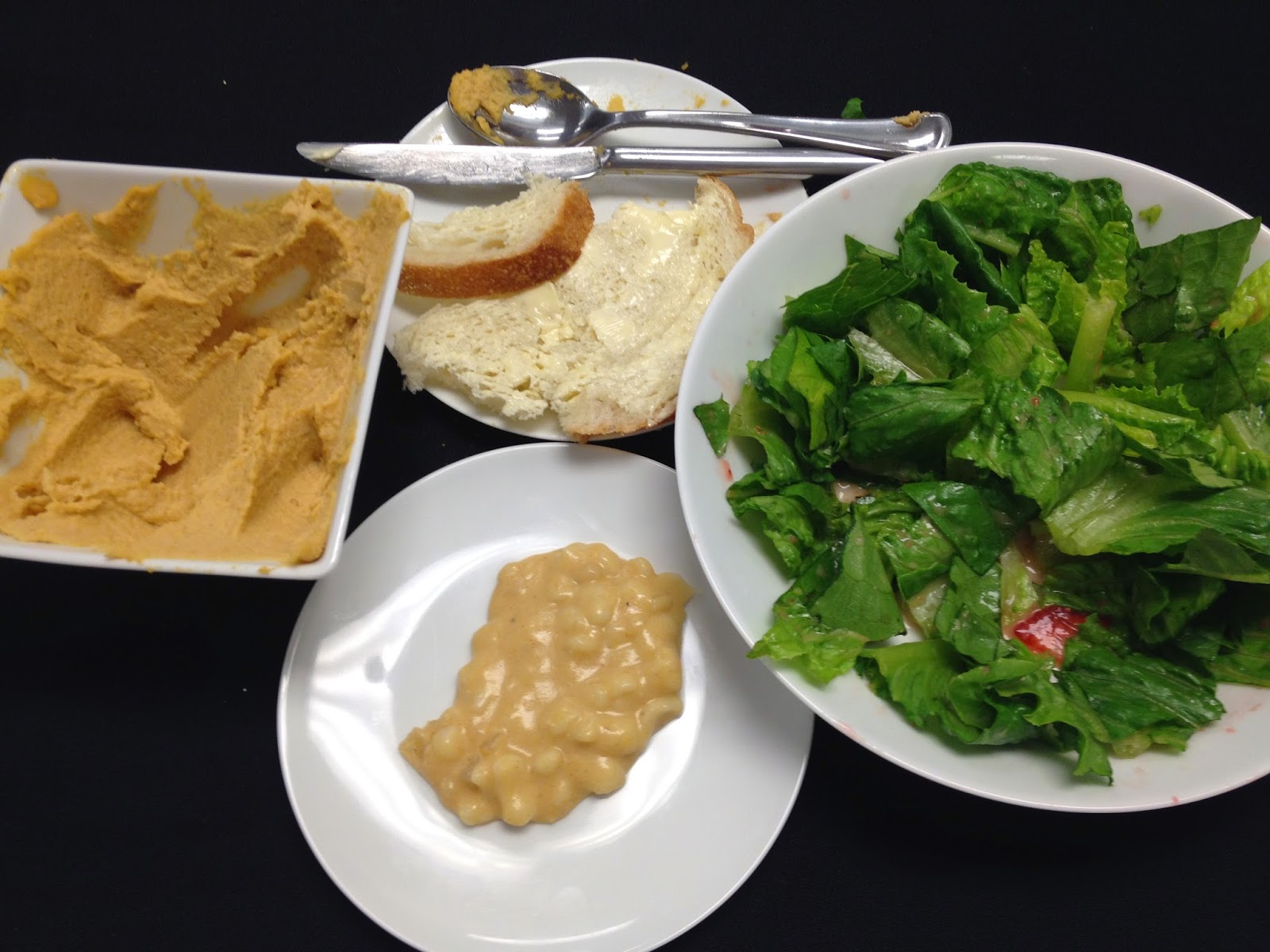 The hummus was good. The bread & even the not-butter was palatable, because the bread was really good. The misspelled Popricosh? Meh. It was not the worst thing I’ve had in my mouth, but I didn’t need to go back for seconds.
Surprisingly, the worst thing in that little rock-around-the-food-clock image was the strawberry salad. The dressing was a water blah that slid off the lettuce leaves. This was the one time I wished some chef would have jizzed in my food, because surely it would have improved the taste.

Next in the dining sampling line up were an order of crab cakes.  VEGAN crab cakes, meaning ZERO crab or crab cake flavor. 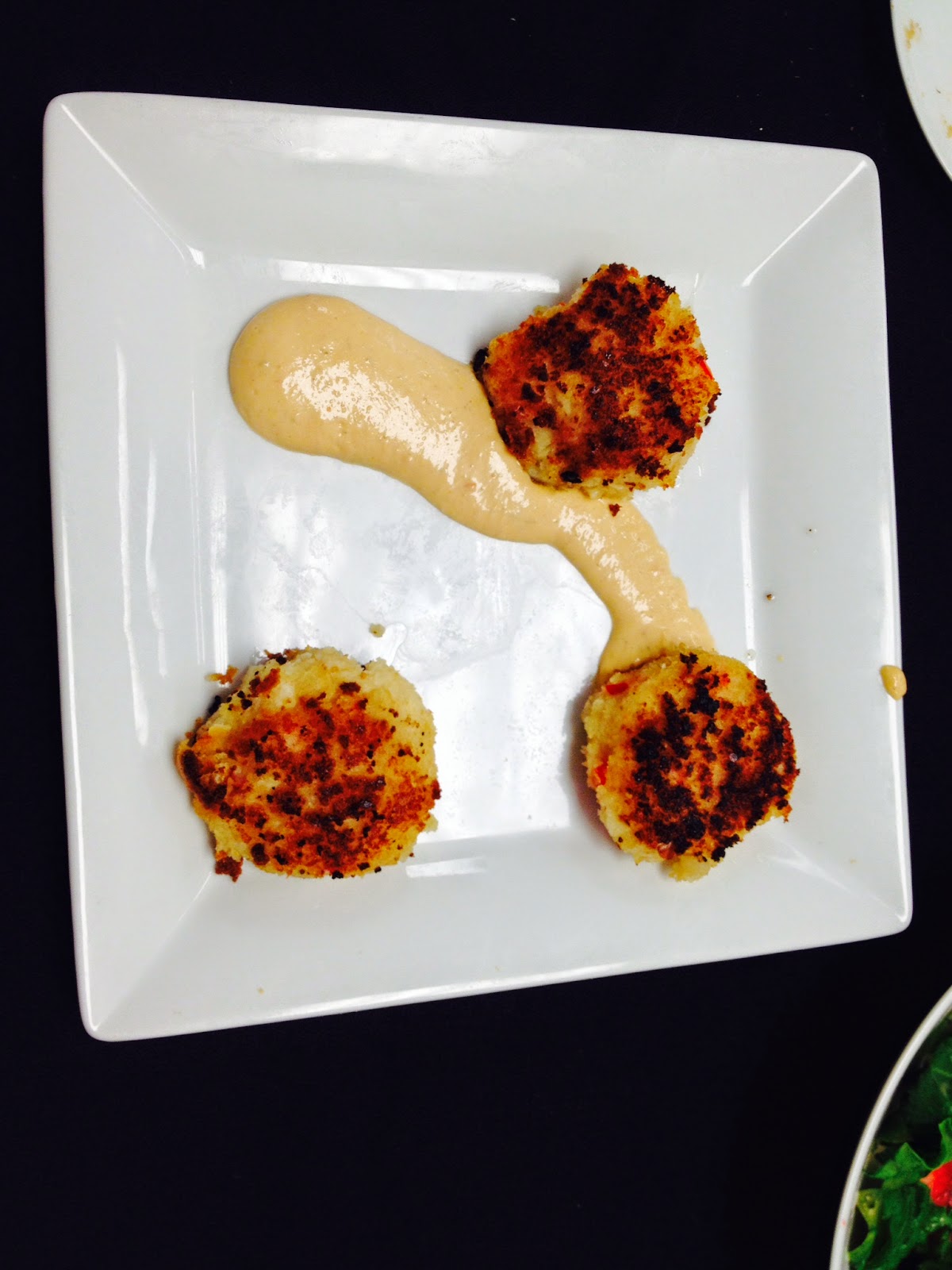 The Hoff ordered a bagel pizza to test. 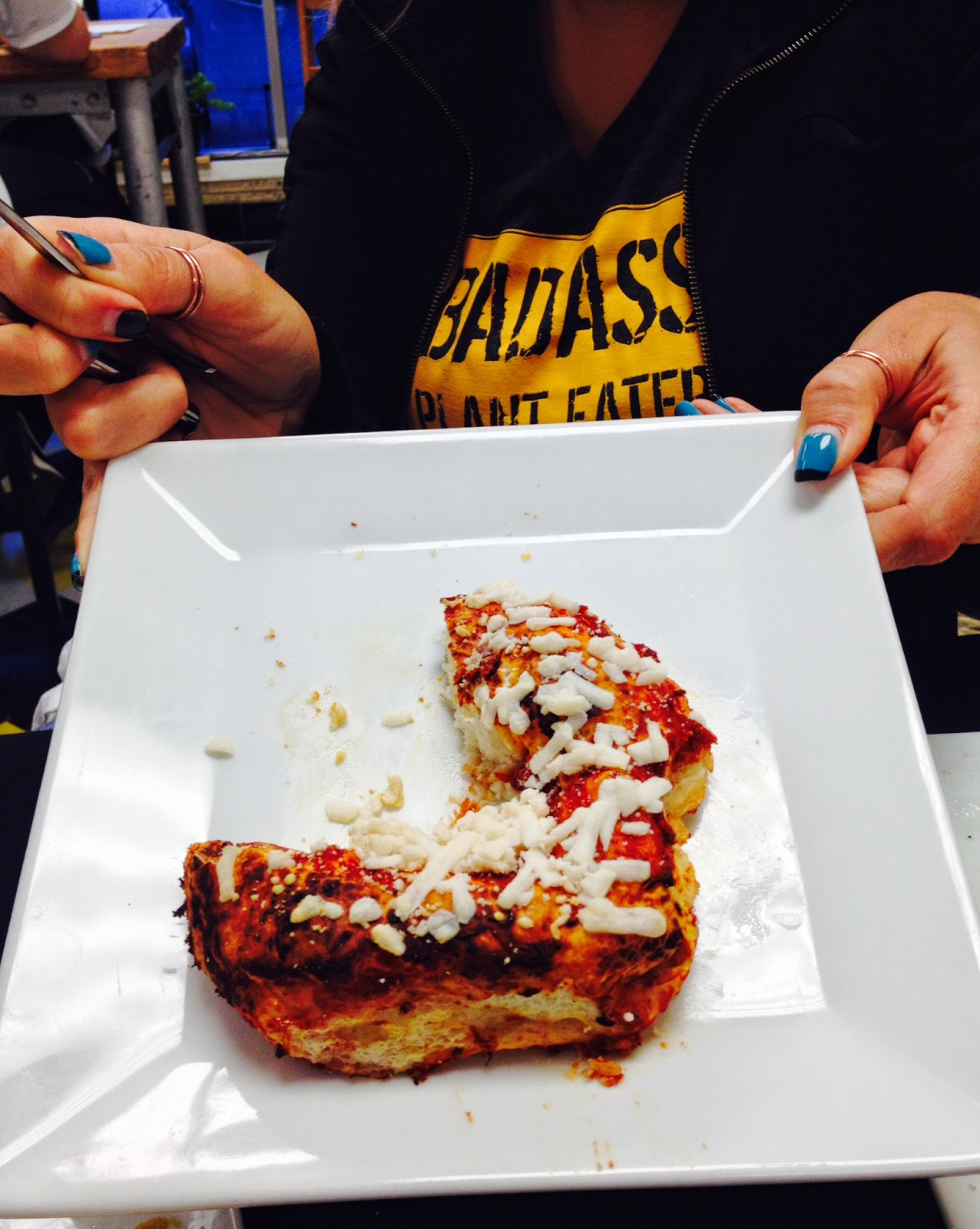 Doesn’t that look delicious??
Katie ordered a real pizza. Well, let’s be real – not a real pizza. A vegan pizza. Vegan pizza is not real pizza. At. All.
I tried it. Oh, Reader, that would have been the time for a movie right there. 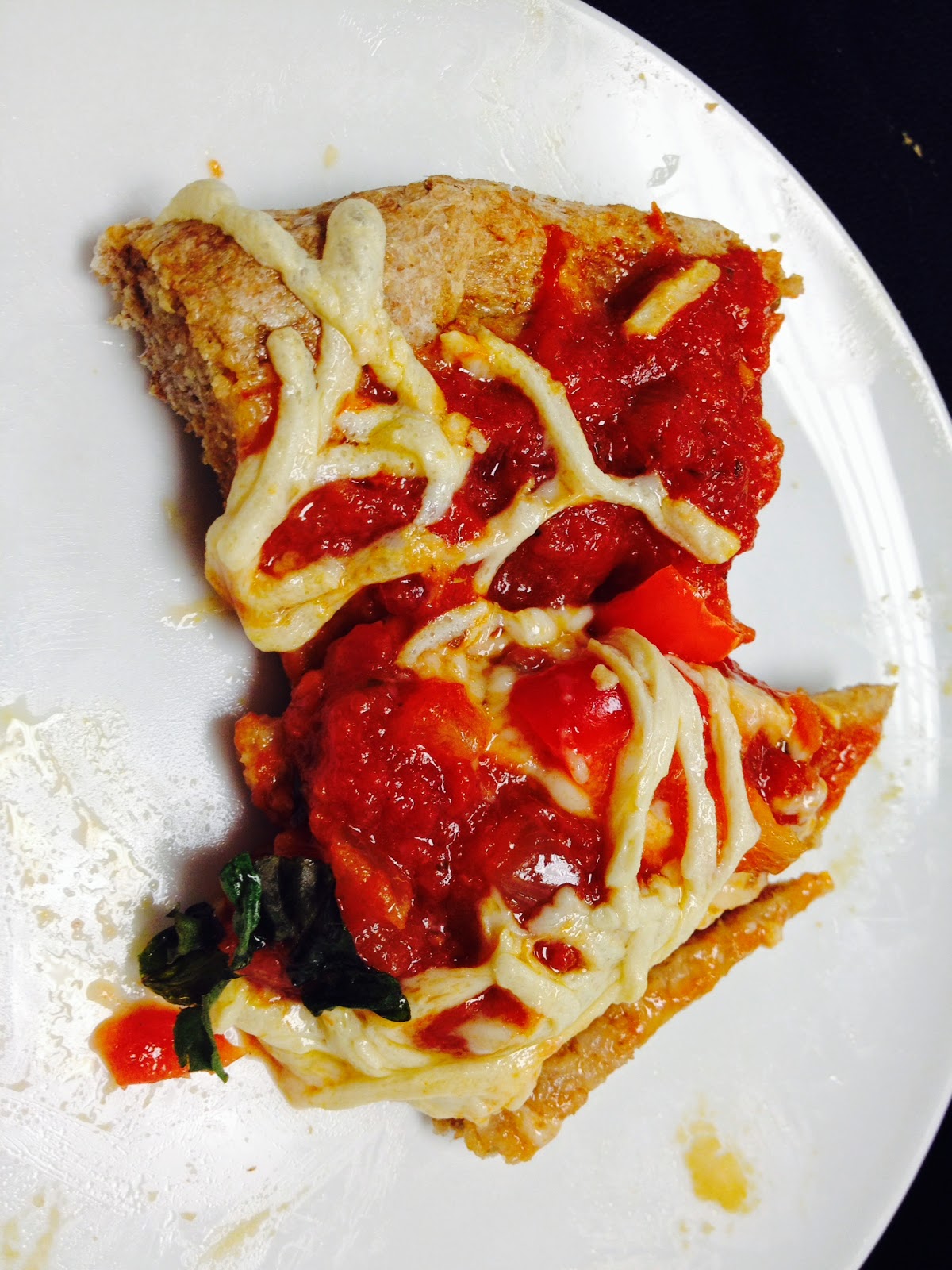 Because Vegan Cheese?? The Worst Thing I’ve Had In My Mouth lately.

After Vegan Meet Up Dinner Night, we headed to Mitchell’s Ice Cream. I needed to cleanse my palette with some full-dairy caramelized chocolate and lavender & honey ice cream. 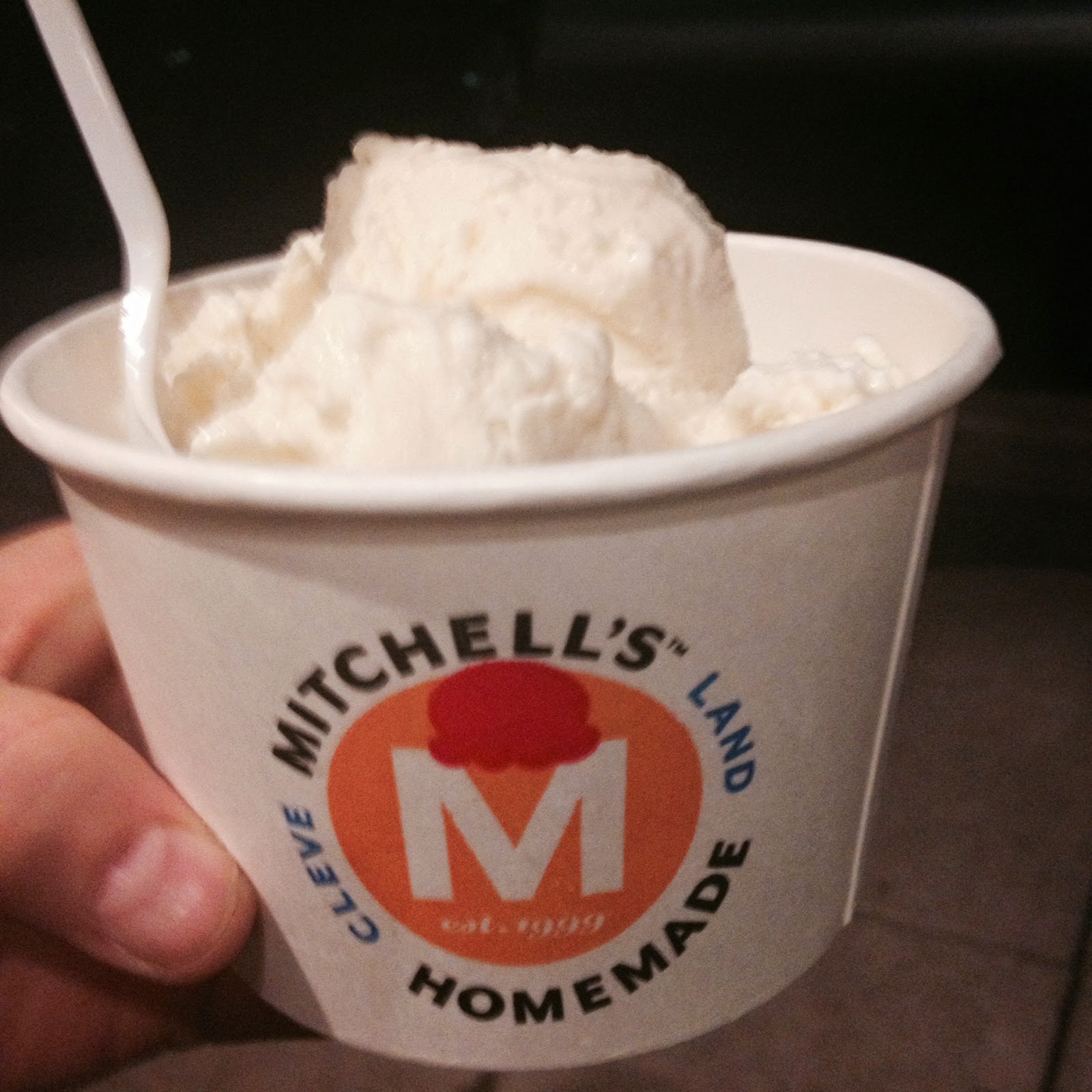 It did not disappoint me at all, and almost made up for that really horrible other stuff I put in my mouth tonight. Almost.

And now I’m drinking a nice glass of merlot, so I can hopefully drink that meal offa my mind.

How was your Friday night, Reader? I hope you put better things in your mouth. Tell.