The Bang Bang Theories
Let's Be Friendies
Well, it’s finally happened, Reader. I’ve done plumb lost my mind.
This whole ‘Christmas in the New House” has caused me to do something I’m certain to regret. And I knew it was a bad idea when I was doing it, but I did it anyway. Like I said, done plumb lost my mind.
Back in my olden life, I used to like to decorate my house for the holidays, make it festive and cozy. But then once I moved, I didn’t have the space to do any sort of decoration, nothing more than putting up a tree on an end table to make it look like a large tree in the window. It’s a good trick, really. All the look, none of the fuss.
One of the things I was most excited about doing in the new house was re-building my Christmas village, which I bought in 2003, and only had 2 years to enjoy it before I was a homeless single woman. I don’t even know if I put it up in 2004, so it may have only been up for 1 year.
While we lived in our old house, I stored it in the garage. The same garage that was inhabited by squirrels, because there was a missing brick in the wall, and My Mister generously wanted to provide a little shelter rather than block the hole.
Until he discovered they chewed through and peed/pooped on everything. Including the box of my Christmas Village.
But we moved it anyway, and I was delighted to discover this evening that:
#1 – Eight years ago, I did a bang-up job packing that thing away.  I put all gajillion pieces back were they belonged and secured it all with tape
#2 – Nothing was ruined on the inside.
I was a little grossed out at opening the box, however, and all the cats went on a wild scratching frenzy of the box until I was able to gather it up and pitch it in the trash.
We had to sanitize a lot of stuff – floor, hands, cats.
So the village was saved. And I decided to put it up.  I had thought it would be pretty on the mantel, but that just wasn’t going to work – it’s quite a busy village with a lot of shops and people, so I had to put it on the sofa table.
This is the moment where My Mister started laughing and laughing. Not with me, Reader. At me.
A trillion little breakable pieces.
Within paw’s reach.
Five cats + Two paws each = Equals a whole lot of trouble.
Nevertheless.
I was the first one to break off a piece of one of the houses.
Of course I was.
And then I struggled with placement of each of the buildings, and how to make ’em all fit. I first had them on a white tablecloth, to be the “snow”, with the lights glowing underneath it which was good in theory, but it created really bunchy fabric and nothing would stay upright with confidence, and it was slippery.
It just felt like a 3:00 a.m. disaster in the making.
So I rebooted and took that off. Then I had to get off all the tape that I had underneath it to keep in in place, and then move all the buildings around yet again, and in the process I pulled the greenhouse off the flower shop and dropped it under the table and my back is too stiff from old age to get all the way down there to get it, so I had to get a broom and sweep it out towards me and it was just a lot of trouble is what I’m saying.
Tomorrow I’m going to go and buy some of that fake snow fluff and roll that around the village landscape, instead of the tablecloth, and hope that works a little better. In the meantime, it is sort of up, complete with a handi-capable man waving from the bridge sans hand, because oh yeah, someone broke that, too (back in 2003).
So while I’m busy blaming and worrying about the cats wrecking the village, I should really be more concerned with Godzilla Me terrorizing Tokyo. 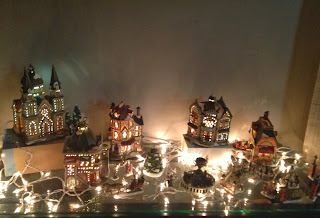 It took me so long and so many repositioning attempts,  I realized that I would never make it as a city planner. So that’s one career we can scratch off my list.

With this project half-assedly done, I decide to decorate the mantle, and just let me go on the record as stating that I will never win a Pintrest award for creativity or aptitude.

I had some lights up there, and some plastic holly, and it just looked so jankety that after about a half hour of effort, it all came down and went in the trash, because plastic holly from at least eight years ago is brittle and dumb looking.
The take-away from that little revelation is that it took me a half an hour to deem it unsuitable. Not five or ten minutes to realize it’s crap. A full thirty minutes (or more).
I may get an award for persistence, if nothing else.
So that was the evening. Now the house is a total mess and I’m so tired from chasing ornaments (decorated the tree, too, or I should restate – I added cat toys to their favorite new thing in the house), and now I wish I would have had a few kids fifteen or so years ago and I’d have them hauling and cleaning for me. Really, I just need a wife.
My wife’s first job would be cleaning up the broken Christmas village at 3:00 a.m. this morning, when the cats will probably decide the village is lacking a cat.  Because, really, do any of us have any notions that the village is going to make it?? I’m ready for the crash.