Reader, this right here is how much I care about you. This post. Because there are pee-lenty of things I  need to be doing around here tonight (laundry and cleaning and putting away), as I have company coming tomorrow before I even get home from work, but these thoughts need to be shared. With you, Reader. Because you’re impotent. Er. Important.

And you need to clutter up your mind with the shit that rambles around in my mind. If for no other reason so you can feel better about yourself, that you have better/more impotent shit rambling around in your mind. Or important shit, as the case may be.

I’ve been putting in some loooong hours at Tiny Town, as it’s ramping up for the holiday selling season and by gosh, they are going to work the shit out of us so we can’t enjoy any of the holiday spirit. I got home last night late – i’m talking 11:00, after running a couple little errands after work – and needed to unwind in bed with some yogurt, which I must sidebar about right now.

Sidebar:
This yogurt from Target is ah.maze.ing. 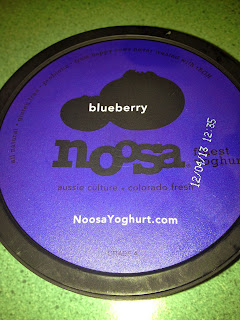 I’m not a yogurt person, really. I try to get into it and be all trendy, jumping on the whole all-the-cool-kids-are-eating-Greek-yogurt fad, but I’m much more of the Jamie Lee Curtis yogurt type, you know – the kind who eats it because it’s good for my intestines, and not so much because I really enjoy it.
But last night, while on one of my errands, I needed dinner and I was standing next to this Noosa yogurt as I had just purchased milk, and so I threw it in my cart. Apparently that’s how I make decisions when I’m tired, I just take whatever is nearest to me and shove it in my mouth. That’s probably how I ended up with a couple of husbands. I was tired.
Man, this is going off in all sorts of directions. I can’t stop this train from jumping the track, I’m tired again and seem to be on a rambler.
Back to the yogurt. It’s so damn good, and it has some inspirational messaging around the lid, about how it’s made from happy cows that get to roam around a farm in Colorado, and it’s a super secret recipe from a grandma and I liked everything about that story, so they had me at hello, even before I put it in my mouth, which was a very good time once we entered that phase of our relationship.
Try it. You might like it. And we can be the cool kids starting a whole new yogurt fad. Unless this already was a fad, and I’m just late to the party. Hm.
But Back to the Original Story:
So I was tired, and heading to bed with my very happy mouth that just consumed that yogurt, and I needed to watch a little telly to unwind. My go-to show of choice was a DVR’d episode of Honey Boo Boo (stop judging me, Reader, I know, I know…) and then I was all caught up and still needed more telly in my night so I turned on an animal show.
About lions.
Lions in the wild.
Hungry lions, who were on the brink of starvation.
Well, none of that is good relaxing t.v. right before bed. Someone’s gonna die in that scenario, always. Usually several things, and it’s usually rather gruesome, and you end up rooting for the lion to live, but then that means something else is going to be his dinner, and then you don’t know who to root for and it’s very conflicted and really not a good way to end the evening.
But I was into and bound to see it through. And they did their typical lion shit, posturing against the neighboring pride, who were encroaching on their territory because this particular starving pride learned how to take down and eat and elephant, which isn’t even part of it’s natural food source.
It was gross, by the way, and the worst part of it is, they aren’t meant to eat elephants, and could only take down the baby elephants, which made it even worse, and then even worse than that is, they couldn’t puncture the elephant’s thick skin, so they weren’t able to kill it before they started to eat it, and it was just all sorts of hell breaking loose on that poor baby elephant.
And the rival pride was watching all this go on and wanted in on the action. So of course there was a lot of chasing and authority-asserting and the absolute worst part ended up NOT being watching them eat a baby elephant alive, but what the elephant-eating lions did to the rival lions.
The big dominant male lion ripped the balls right off the rival lion. It was an intentional Take That.
And even worse than the male getting his balls ripped off?
The other dominant male lion went over and lion-raped one of the lionesses of the rival tribe.
I mean, it’s instinct was to just rape the fuck out of that lion, to show her who was the boss.
I was so mad at those rape-y lions, I hoped they’d choke on a baby elephant, and then I wanted to spank DJ just for being part of that species.
I didn’t spank him, but I gave him a firm talking to and told him that he had better not even think of trying to rape anyone in this house. Me, Kitty Purry, and Girl Cat will not stand for it.
I was very disheartened all day thinking about those poor lions, one now ball-less and the lioness all violated right up in her lion twat.
It was a sad story. And lions suck. Just ask the baby elephants.