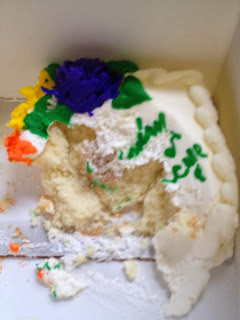 I had my cake for one whole day before the asshole cats had a fight right in my cake and smashed it.

Before you judge, it was only the box that was smashed all in the cake, it’s not like I had to eat around fur and asshole imprints.

Because that would be wrong and even I won’t eat a cake that has an asshole imprint on it.

One time, many birfdays ago, I was so drunk I stepped in my cake, which was hidden on a stairway for a later surprise. It surprised me alright, as I stumbled my way up the steps to pass out in bed.  At like, 6:00 p.m. in the evening. Now, let me just go on the record as stating why I was so drunk on that particular birfday. I feel it begs an explanation. I was visiting ex-in-laws in Texas, all they did was drink from sunup to sundown, and every time eating was discussed, it got pushed aside while we made another cocktail.

The next morning we pulled out the footprint cake, loaded ‘er up with candles, sang Hippo Birdie to Me and ate around the footprint.

That was also the time I got a banana stuck up my hoo-ha, and needed kitchen tongs to pull it out. Yes, tongs from their kitchen, but since not much cooking went on around there, no harm came to or from the tongs. But that’s a story for another blog. Or actually, I guess that’s the entire story. And I’m sorry for that right there, because now you know it and you can’t unknow it.