I have been Getting Mine! in several formats as of late, Reader.

And I do not likey. Because it’s mean.

But I probably (most likely) deserve it, so I can’t even be too mad at Karma. It’s more like an acknowledging nod of the head, chin down for just a moment, accepting Karma’s touché.

When I was married, I hated – I mean despised! – my exhusband Fucksteve’s allergies. I hated all that phleming and clearing of the throat – everything that came with it. I had zero sympathy. Zilch. I just wanted him to stop making so many noises and get on with life.

And now? You guessed it. I’m the noisy one. I’m so noisy with my own allergies, I can’t even stand to be around myself. I throat clear and cough, and when it’s really super special with the pollens, the tickling in my throat is enough to test my gag reflexes and I have to talk myself into NOT throwing up on my own lap when it starts. Because that would just start a chain reaction. But it would probably clear my throat. At least momentarily. Maybe.

So Karma’s stickin’ it to me. Right in my throat.

Also when I was married to Fucksteve (I note a theme here, Reader. So basically he’s to blame for all of this. Of course.), I lived in an old fixed-up colonial in the city proper.  It was realz nice on the inside, albeit in a shit-tastic neighborhood that only got more shit-tastic the longer we lived there, hence the reason I moved out upon becoming one of Beyonce’s Single Ladies. I had my hands up, hands up… (small digression, I blame the allergy pill I bravely took this evening).

So anyhizzle (I get a little street talkin’ about when I lived in the old ‘hood), while I lived in that nice colonial that we toiled and sweated and put a lot of elbow grease into, we had nice carpet installed. And at that time I was the mother to The Best Dog In The World, who truly was The Best Dog In The World, but he had his small quirks. Nobody’s perfect, right? Right.

One of his small quirks was digging up a few spots on the carpet. Now, in his defense, he was only digging it up because I had a cat who took a pee in one (or two, it’s impolite to count, Reader, so back off) little spots. One, under a table, and two, at the base of the stairway. Now stop it with the counting!

The Best Dog In The World decided he’d dig up the carpet in those two little spots.

So while I was on the way to becoming one of Beyonce’s Single Ladies, it was advised (by my lady lawyer) to sell sell sell while I was still married.  Only problem was, now the house had a few imperfections.

I did what any Single Lady Who’s Not a Master Carpenter would do: I covered up those little spots with some decorative rugs, and promptly sold the hell out of that house. An Inner City house, sold in a matter of months. Quick.

And I didn’t feel a bit bad about the surprise they were sure to discover upon moving in. Because hey, Let the Buyer Beware, am I right? Right?

Karma doesn’t think that’s very right at all. So Karma’s paid me a visit.

Fast Forward 8 years, and Beyonce’s (Still) Single Lady is buying a house.  And on Sunday, she received an email and a picture from The Best Realtor In Ohio, who also happens to be her namesake (ironic that there would be TWO Trixie Bang Bang’s in the same state, much less the same area!).

The current homeowners dog-shammed their Not The Best Dog in the World, by making her sit next to the evidence: 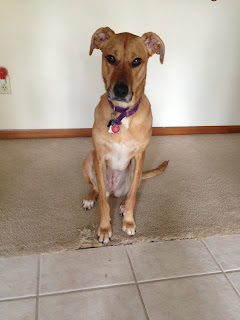 And they are apparently a little frantic about what we would like them to do about it.
I laughed.
And figure I’m owed it.
Because you can run from Karma, but she’ll catch up with you sooner or later.  She has all the patience in the world, My Friends.