The Bang Bang Theories
Let's Be Friendies
The answer is #3, Reader: Socks. 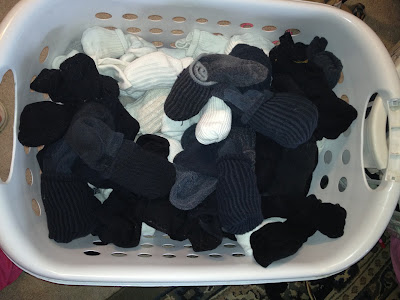 Yes, with the day and eve sprawled before me, I chose socks.  I actually did phone a friend, and watched some nonsense telly, too, so technically it’s #6 & #8, too, but mostly it was #3.

It took me an entire movie to get the socks matched up. It was the perfect show for such a mundane activity, I only had to pay 90% attention to it, and got a few guffaws. It was the one about the guys who pee in a fountain and then the whole switcharoo happens, where they get in each other’s bodies – the Change Up or something. Perfect movie for sorting socks – they can put that in the review if they’d like.

We did have a step up in our telly-choices. No Hoarders or Strange Addictions. Instead, we watched something on Animal Planet about cute kittens and cute puppies. So Cute or something. And by “we”, I am referring to the cats and myself. Because yes, they were watching t.v. right along with me. It’s not the best picture, but you can clearly see Purry sitting on the coffee table mesmerized.  And this was for a commercial for the alligator-wrestlers – for the real show of cute cute kittens, The Baby (sitting too close to the tv) was pawing them on the screen and Purry’s head followed their every movement.  It was really quite cute.
Rob, if you look closely, you can see your Twin Peaks DVDs on the t.v. stand – we haven’t watched ’em yet, but I also haven’t LOST them, which is a step up for my usual “what happens when people lend me stuff” self. Usually we lose them or spill water on them or something. Twin Peaks still sits under the t.v., waiting and hoping for the right opportunity to be watched.
They are in line along with Downton Abby Seasons 1 & 2, Game of Thrones Season 1 and a long-ago purchased Dexter Season 1. So eventually we’ll get around to ’em all. Perhaps when March Lion’s for us again. Because even though we had a 70-degree Sunday, I have no doubt we haven’t had our last snowstorm. Because I have a new job with a shitty long drive made even more fun with snow, that’s how I know.
Speaking of said job, I’m off to get ready for bed for Busy Monday, which awaits an hour closer than it did last week, complements of the time change. Spring Forward, I really don’t enjoy you.