We’ve been rearranging, Reader. I know, I know, you envy me. Don’t. It’s not as glamorous as it sounds.

We started last weekend, or the weekend before. I’m not entirely sure, all I know is that I am disturbingly getting comfortable with walking through paths in my house, to plop my ass in my recliner. I’m almost able to block out the chaos around me. Almost. But this? Is more than likely how hoarders starts.  It’s all too easy to just sort of ignore stuff and step over it. At least for me, I am pretty sure I have a hoarder gene. And that’s sort of a contradiction, because I also have a black hefty trash bag and I’m pitching things out willy-nilly (not to be confused with willy nelson. I wonder how he’d pitch things out? probably whilst smoking up, which would make this shitty project just a tinch more enjoyable, I think).

We cleared out everything in our spare room, and then started moving some bigger things back there. Kenny has plans that it’s going to be his game room. Fine. We got the cocktail arcade table out of the dining room area, so that’s a start. He also moved his keyboard back there, we moved one of the small dressers into our bedroom, and had to leave my hope chest because it’s just too big and filled with heavy heavy hope, apparently, because sweet molasses, we strained our milk just trying to move it over to the side wall. There’s a lot of crushed hopes in there, I think – the hopes are all weighted down, which is why that thing is so blasted heavy.  So it shall stay, ‘neath the window. Or winda, as my mother pronounced it.

My Mister came up with the plan o’ organization, which is a little concerning because he’s not really good at that.  We are to stack things in 4 piles: Keep, Toss, Donate, Sell. We have grand plans of raising a vacation amount of money by selling prized possessions on Ebay.   I had my first concern with this not going to work quite according to plan as I tried to put the foam Taco Bell hat in the “Toss” pile and he informed me that it was a “Keep,” and I quote, “You know, for parties and stuff.”

Because I have no shame (at the moment), I give you this, a Keep, according to My Mister: 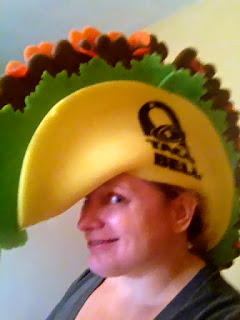 You see how it could be a little difficult to clean up around here?

I shall get started on the pile making right after I blog and get a cup of tequila. Because that’s the only thing that is going to get me through this.  Although I think the kitten (who, by the way, we’ve FINALLY AND OFFICIALLY named DJ. Because he has a loud sound system, with all his meowing and purring) is really going to have a good time with it all. Yep, I can see he’s going to want to be my little help-purr.

I’d better get out the big bottle of tequila.