The Bang Bang Theories
Let's Be Friendies
Well, Hello There! If you’re out there, that is. I’ve been rather absent, ever since my vacation. In a nutshell: It was good. The hotel was touted as 5-star, but that was a generous rating. It was more along the lines of a 3-star, but whatever.
It was on the water.
It had a beautiful pool.
We didn’t get ambushed by The Cartel (as was our fears) and we didn’t get bedbugs (as did the newlywed couple who stayed at the resort down the strip from ours).
So all-in-all, it was a fine trip.
Pictures?
Ah, that’s where The Universe sticks it to me.
See, I found a camera in the bathroom in Cancun. I took it and flicked through the photos, trying to find the owner – see the pictures on the camera, look around the baggage claim.
No luck. Turn it in? What, in Mexico? Like they’d ever get it returned. Yes, stereotyping. Deal.
So I threw it in my friends bag and considered it a found camera.
And I had a distinct sense of foreshadowing that I wouldn’t be coming home with mine. The yin and the yang, the give and the take.
So I was careful. Very careful the entire trip. I kept a track of that camera at all times.
Until I lost it.
The last day, on the way home. I took a photo of our last room-service breakfast and probably walked out with it still on the table.
I called the hotel. No, senorita, no camera here.
That’s that. It was a good camera, newish, with panorama capabilities. More importantly, it was my friend Dawn & my first spring break together, and our first trip since we were 17.
As she put it, “Well, we’ll have our memories, until we get Alzheimer’s.” 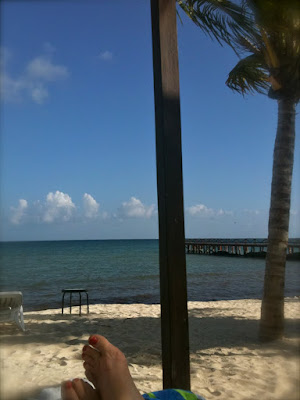 And three pictures from my iPhone.