The Bang Bang Theories
Let's Be Friendies
This was one of three things that managed to annoy me at Burger King: 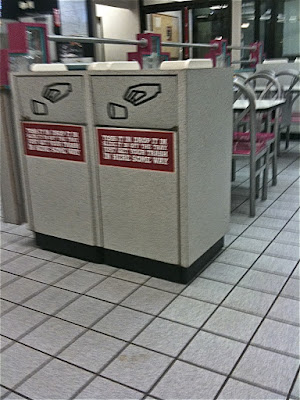 The non-rhythmic verse on the trash cans. The photo’s shitty, let me clarify:

TOSS IT IN DROP IT IN
SLIDE IT IN OFF THE TRAY
JUST GET YOUR TRASH
IN HERE SOME WAY
WTF, Burger King?? That’s not a haiku, the meter is all off to be any sort of verse — it’s just B.A.D. — Bad.
The only thing worse than no attempt is a half-assed attempt, and this is one half-assed attempt at being clever.
I wrote this JUST NOW, I gave it just a half-thought more than zero thought and came up with this:
You can drop it, you can toss it
You can slide it off the tray
Doesn’t matter how you do it
Just get your trash in here, your way
Get it? Because BK is all about having it your way? See how easy? And they wouldn’t give old crotchety ladies an aneurysm trying to find the rhyme.
Responsible Rhyming, Burger King. That’s all I’m asking.