The Bang Bang Theories
Let's Be Friendies
No wonder I’m never well-rested.
You may or may not recall my love affair with pillows.
When I moved in with Kenny I threw out his most disgusting bed pillow and ever since we’ve been on a quest to find him a suitable replacement. I’ve spent hundreds of dollars searching for the pillow that will meet his needs, which are:
1/ to be able to ball up a giant pillow into a little square when desired
2/ to be able to create a pillow “tube” if desired
3/ have enough support without having TOO much support
It’s been a challenge to meet his needs, because his needs are sort of stupid. Seriously, his pillows often end up in some really funky tube shape, of which I wish I had a photo to share, but we’ve thrown them out when they become this lumpy mess that he turns them into.
He’s been yearning for pillows from The Wynn hotel in Las Vegas ever since our trip there over New Years weekend. I doubted they’d be all he dreamed they would be, but finally in July I looked into ordering one. I was apprehensive about the cost, the pillow cases alone were $400.
I bit the bullet and inquired. They were only $89 each, king sizers. Really?? I was dubious and asked the man about four times if he was sure that was correct, based on the cost of the cases alone, but he assured me that price was correct. So I ordered two. They shipped ’em up here.
Those Wynn pillows have not disappointed us. They are fantastical pillows. So fantastical, in fact that Twinkle, who has never been a pillow sleeper, has taken a liking to them and now retires to my pillow every evening. I put my old pillow at the top of the bed for him, but no-siree, that is not the one he wants. I can push him up to that one for a while, but then throughout the night he encroaches down onto my pillow, and I wake up more often than not with a cat ass in my face, or he just blatently puts his paws on my eyeballs, or decides I need my hair cleaned. 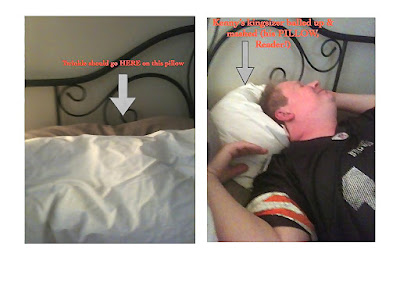 In Other News.
Kenny & I attended a wedding last night. It was held in a party center located at a campground that had all the fine makings of a horror movie. Beat-down looking trailers, a pretty lake, and the rustic, wood-sided party center. It would not have surprised me a bit if something rose from the lake and chased us with a slingblade. ~insert gutteral Ummm. Hmmm. ~
The party center itself was very nice. But it was the country. And a campground. Put those two together, and you get a septic system.
Kenny: “I walked into the bathroom and it smelled so much like shit, I turned around and walked out, thinking I’d already gone.”
Ah, country living at it’s finest.