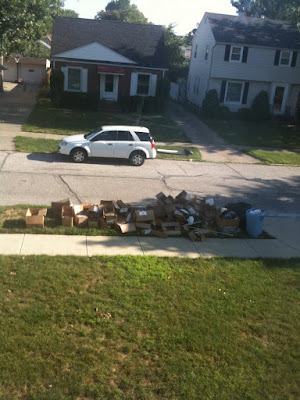 The city came and picked up Day 1, so we could reload. I don’t envy that job, either.

The upside is, the basement is getting a good cleaning. And we’re getting rid of a bunch of stuff. A lot of it was stuff we were hanging on to because it was good enough to keep, whether we used it or not. It wasn’t trashable until now.
I do have an unharmed king size 3″ deep pillow-top mattress topper should anyone be interested. It’s stored in a large plastic container down there since Christmas, when Kenny’s mom bought us a different mattress topper thingie. We paid about $150 for it, so see why I hate to just throw it out? But if someone has a king sized bed and would like it, please let me know. I’d like to give it away rather than store it, it’s taking up a lot of room in that giant bin.
I also have 2 tail pipes for a Harley Davidson. See what I mean about being too good to just throw out, even though I’m not using them? I still couldn’t bring myself to pitch them. I’m sure they would be valuable to someone. Kenny threw out the plastic protector thingie for his big screen t.v. He said they cost about $150 to buy, but he never used it/liked it on the t.v. So that was in the basement until now, too. He did put it on the treelawn. I told him to sell it on Ebay and he asked me how I proposed to ship it. Point noted.
I think I’ll take pictures of those Harley pipes and post them up at work. I don’t know anything about ’em, but maybe I could get $50. I’d be happy with that. Vacation Fund. Make something good happen out of all this.
Alrightie, I’m off to work. Heading in a little late this a.m., had to split 1/2 a muscle relaxer with Ken last night, we were both aching.