The things I do for you, Reader.

Let me tell you about the things I shield from you.
Again with the vacation.
I am of the fairer-skinned freckly-faced complexion. I don’t tan much at all, except for a darkening of said freckles and a smattering of sunburn in between. Knowing my tanning challenges, I still enjoying lying about and letting that warm tropical sun melt all the way into my bones.
Another thing you need to know about my challenges. I’ve got a scar on my stomach, in the bellybutton region from a car accident years and years ago (lacerated liver, required some exploration on my innards). So my bikini-modeling days were over before they had even had a chance to begin. That’s the only thing stopping me from being a supermodel, in case you were wondering why I wasn’t plastered high on a billboard somewhere.
So because of that scar (haha, that’s the reason!) I wear a tankini thingie, which covers the midriff. I’m considerate to other’s eye-pollution.
I alternate between a black and a hot pink tankini. On this past vacation I donned the black one, most likely because it was the one that was so carefully unpacked and gently placed on one of the walk-in-closet shelves. A place for everything and everything in it’s place, that’s my motto. 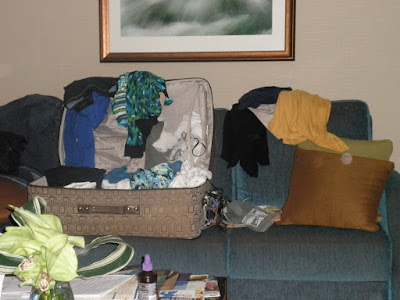 We had two back-to-back cruising days, Thursday & Friday. I sunned myself and read and lollygagged about both days. On Thursday I noticed as I undressed that the tummy scar was bright red, glowing almost. Hmm, tilts head to the side in curious wonder. Tummy scar is HOT. Well, it was hot out there.
Apparently, it was blistering hot. After an hour in the Friday sun (yes, just an hour, I know my tropical sun limits – and that’s with SPF 70 slathered into my skin), I went back to my room to shower up and jumped back in horror as I undressed in front of the full-length mirrors on the walk-in closet doors.
Scar had morphed into a ginormous blister! I was afraid to touch myself (ahem. you know what I mean). I peered ever-so-cautiously over the edge of my “can”yons (you’re welcome, Mr. M., for that pun, even though I’m not sure if it makes sense because they are really the MOUNTAINS and not the canyons, but … oh well, nevermind) to get a good gander at this blister that had to be 2 inches long.
I took a picture of it so I could see it from other angles. It looked like a clitoris, surrounded by the pinkish scar edges.
Great. A stomach clitoris. As if what goes on under these clothes isn’t enough of a medical journal, I now have one more thing to contend with.
Of course I couldn’t wait to show Mr. Anderson. He wanted me to pop it. I told him, “No way, Pal, not ever going to happen, no sirree.” I’m going to leave my tummy-clitoris right where it’s at, until it decides to go away on it’s own.
All I can gather about the creation of the scar-clitoris is that it must have gotten so hot underneath that black tankini that it literally fried my sensitive part. I’ve never had that happen before, but maybe I usually wear the pink one? I don’t know, really.
It climaxed on Saturday or Sunday, I don’t really recall when, all I felt was something wet and oozie. There was no good that was going to come of it, it’s right at the waist-band level so it was only a matter of time.
Now? Now it’s still angry-looking around the edges, with a mean-red going on, and it’s turned black as it’s scabbed over. It’s actually somewhat frightful and I’m keeping a close eye on it. Kenny assures me that it looks like any normal scabby thing. Somehow it was sexier when it looked like a clitoris than a black scabby circle. But maybe not really.
And how does this all tie back to the nicey-nice things I do for you, Reader?
Well, I was out of space on my camera memory card and when the opportunity to get a photo with myself and Charo presented itself, I had to take quick and decisive action and choose one photo to delete. I chose to delete the photo of the tummy-clitoris. Otherwise it would have been my new masthead for this blog and you would have been greeted by it on every visit.
You’re welcome.