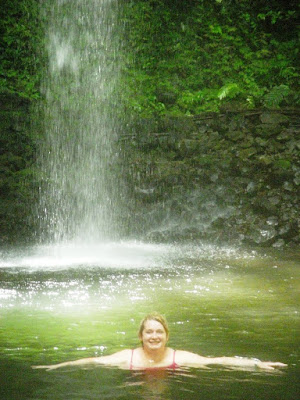 I’ve been quite remiss in posting much about vacation. You’re welcome. As My Friend Murd (hey, if James Frey can write a book called My Friend Leonard, I can incorporate My Friend Murd in a blogpost, so there) wrote, “Who wants to read about someone else’s vacation?!”
But quickly, here are some fun things that I liked about my trip with My Friend Joanne (it seems there are quite a few applications to this whole “My Friend” thing…I’m going to roll with it).
First things first: I was VERY. VERY. BRAVE on this past vacation. On the lovely island of Domenica (dom-eh-neek-ah, not doe-min-eh-ka), I trekked through a rain forest and jumped into a pooling waterfall. See proof above. I was quite apprehensive about the whole thing. I’m still sporting a four-inch long mar on my leg from something that bit the shit out of me in Belize or Mexico in March – one of those countries that has mar-leaving biting bugs. So I’m wary. Plus, I figured, “This is a REAL fucking rain forest, not some make-believe “rain forest” at the zoo in Cleveland – this place has Tarantulas, Boa Constrictors! (snakes that will constrict the shit out of your chest until you DIE!), and probably some jumping monkeys that could leap out and land Right On My Head! You thought I was wary in Grand Caymen with the lizards? That had nothing on this, Sista. I had to tamp down A LOT of apprehension to get out of the tour bus and forge my way ahead. Ahead on the well-travelled path, but ya know, it was still weedy, with overgrown bits and slippery footing.


But! I did it! And when I got down there and saw the Natural Steps (read: scary, slippery sliding crooked stones that are just WAITING to catch you in an inattentive moment and catapult you to the bottom in a flash-second hurry), I almost didn’t go further. But then I asked myself my new Life Mantra: “If Not Now, WHEN?? If Not Me, WHO??” and I threw my pack to Joanne (she was already at the bottom, the big showoff) and I made my way to the bottom, threw on my watershoes (hey, I’m brave, but not crazy -there’s probably a lot of exotic biters living in that water that I don’t need to come into skin-on-skin contact with) and splashed around in the water. See: picture above again.

However, I did not loiter. No sirree. I had this on my mind: 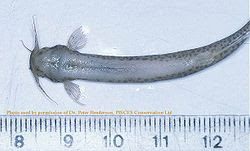 Snatch-crawling fish. Thanks, episode of House. These are Candiru fish, and while they “claim” to only be in the Amazon, how do we really know for sure?? And there’s *only* one documented case of one crawling up someone’s urethra, but what about the undocumented cases? So that’s the sort of horrible warnings that weigh on my mind and so I had to get out before something climbed on up there that wasn’t invited.

So then, yesterday during Father’s Day at Kenny’s parents house, I still had my feelings of bravado as I took a walk into their backyard for the very first time (it’s been five years, I finally worked up the nerve after trekking through a rain forest). They live in a half-million dollar house in Brecksville, and I’m still afraid of their wooded backyard. Doesn’t that help put my fear of the rain forest into clear perspective? But I went out there, because some kids were over and they told me how the backyard was filled with small baby frogs and I wanted to see it for myself. And oh, p.s., I was in flip-flops, ANYTHING have crawled right onto my bare skin out there, it was very risky. Then the 11-year-old girl came up to me with her hands cupped and I jumped back and shrieked at the top of my lungs, “DON’T SCARE ME!!!”, thinking she was going to throw something from *eeek* NATURE at me, but all she had was a teeny tiny baby frog in her hand that she wanted to show me.

I later caught their dad mocking me.

They think they’re going to get me to camp by the end of summer. I told them that instead, I was going to show their girls how to stay in a 5-star hotel and order room service and get extra shampoos.