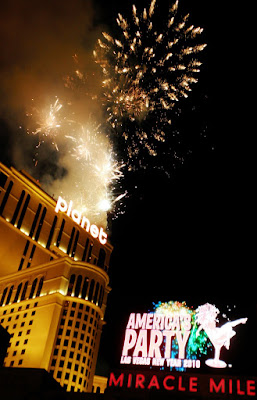 Happy New Year, 2010! I really like the year, the number is a good one. It’s twenty-ten. Sounds like CB talk. Twenty-ten, Good Buddy. Roger dat. See? Nice. We partied it up in Vegas.


“Partied” being used in the loosest sense of the word. We didn’t have a three-some, find a baby or a tiger in our room, or swim in any fountains. However, I did get a massage by an Asian man named Gilbert, who used his small little Asian fingers to dance across my back. And he rubbed out my lower back pretty nicely, and rubbed hot stones on spots.

The massage experience actually was a little iffy for me this go-round. It started off awkward, which is never a good start. We were staying at Paris, so it’s not a slouchy spa at all, but the first thing that put me off was the tatty little robe I was handed. It was thin and skrimpy feeling, and I did not feel anywhere near close to being enveloped in a puffy pillow of comfort, as I like. But I adapted.

They didn’t have changing rooms. This was a first for me. Usually there’s a couple of curtained areas to keep my ladyparts out of view. Not here. So I had to haul my tatty robe to the handicapped toilet and change there, because well, I’m MODEST. Didn’t you know that?

So there was that. Then, I sat in the waiting room to fill out my little health card and frankly they ask too many questions. Allergies, surgeries, gerbils stuck up your ass…they want to know it all. Listen Bub, you’re rubbing my BACK. You don’t need to know what I have or have not had surgically altered, unless it’s my shoulder blades, I guess. And it’s not, so MYOB.

They led me over to my massager and I was startled to meet Gilbert. I was told I’d get rubbed out by a chick. Not that I really care, I guess, but I said, “Oh, I was supposed to have a girl massager!” and this put them into a flutter of activity to find a replacement. It was a busy Saturday morning, and I finally said it was fine with Gilbert, it’s not like I haven’t undressed for a guy before and it was fine. Gilbert chortled at that and led me back to the room.

Gilbert left me to get undressed and I looked at the table in confusion. There was no sheet to slide my ass under, just a skrimpy little towel about the size of a bathmat. Really? So Gilbert knocked on the door as I was taking a little while to figure out the best mode of coverage with that thing, and I finally got it positioned across my ass and even then it kinda hung out on the edges a bit. He came in and I told him I was a little uncomfortable to be all out there with a bathmat for coverage, and I told him that looking at my naked ass for fifty minutes wasn’t going to be doing him any favors. He got a sheet and gave me better coverage.

So it was a shaky start, but we finally found our groove, which was me trying not to moan in ecstasy while he rubbed things that were tense. On my back, Dirty Minds. And I got a head rub, which I love. It was a happy ending. If it had only ended there.

I figured since I had full use of the spa I might as well take a schitvz. Wandering in to the steam room, the first thing I saw was a naked older woman. I sat down on the other side of the room in my robe and she proceeded to instruct me with her European accent to, “jeesst teek off all your clothes, let your body be freeeee! Eeet feels sooo gooood!” in a sing-song voice. So what could I do?

I took off my robe and kinda sat there. And she had to comment, “Now, eeesn’t that better? Free your body!” So I was freed alrightie. Until another gal came in the room, and then I threw a towel over my ladyparts because frankly they just felt better confined. They’re used to that. She eventually left, I left, and I’d like to say that was that. But it wasn’t. But I’ll leave it at that. It’s enough, really. The remainder of the story includes a wayward spa jet and a toilet seat cover, and really, you’ll be happier not hearing any of it.

On to other things. New Years Eve, we celebrated in the street where we waited for the countdown and fireworks. I took some random street pictures and saw this one and wondered what the heck was all over my camera. It’s Vegas, it wasn’t raining, but it sure looked like splotchy raindrops against the night sky. It’s not, and it’s only on a couple of the nighttime photos, and I am convinced they are spirtual orbs floating around. It’s my ghostly Vegas experience. Click the photo to make it bigger and see for yourself. Kenny was skeptical until we went to an orb website and even he concluded that these look like ghost orbs. I hope it’s a sign of a good year! Roger dat, twenty-ten. 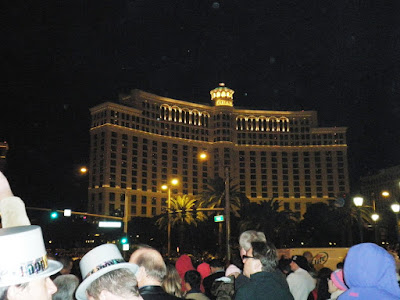 One thought on “This Post Shoulda Stayed in Vegas…”