There’s been a lot of this going on in at the house this week:


And since Stan sleeps on his Down pillow, which is right next to my Down pillow, and since he hasn’t mastered the art of the Dainty Sneeze, I’ve had cat mucus sprayed on my face repeatedly for the past few nights. 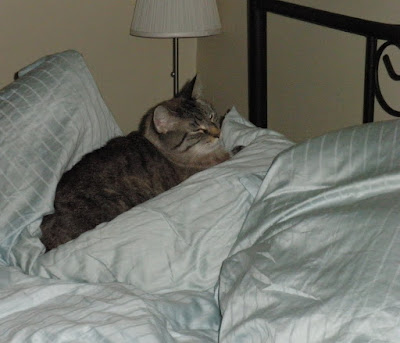 It hasn’t been limited to just Stanley – they’ve all caught this cold. Kenny’s been getting showered on his side of the bed by Girl Cat, Toby has been having machine-gun sneezing fits that, much to my dismay, have not been able to be captured on video because I’ve been too busy laughing in the face of his sickness. But seriously, it’s pretty funny stuff to see in person, he had a record 23 sneezes in a row.

So with all of ’em catching this little nasty bug, Saturday Morning Fun involved wrangling up all five cats and carting their sneezy asses off to the vet. It was quite a chore to wrangle up five of ’em. Girly is so under the weather that she didn’t even complain, at least not until I tried to shove Stanley in the cat carrier with her. She ended up beating his ass up a little bit, so I hauled him out and put him in another one with Toby. We only have three carriers – who knew they’d all need to go at the same time? So Girly got to ride in her own carrier, Toby and Stanley were easy enough to catch and shove into another, and the baby Black Kitten (who, by the way, we’ve officially named Fuji on her vet charts – Kenny likes that name, we’ll see if it sticks) tried to make a run for it, but came back when I shook the can of Pounce treats. Twinkle was the only true hold-out, he was under the guest room bed and we had to prod him outta there with a broom handle. He’s the sickest of the bunch, it turns out. Hundred-n-four degree temp and a weepy eye.

The vet was rather impressed that we were able to corral all five of ’em. I am, too, as a matter of fact. So they all got anally-raped with the thermometer (which Toby protested the loudest about), shots of the kick-everything-ass antibiotic which lasts for 14 days, and a steroid to make their breathing a little more comfortable today. Twinkle got an additional eyedrop prescription. Everyone should be on the road to recovery. And this counts as the cat’s Christmas gifts, since this little endeavor set me back $490. Hey, at least he only charged me for one office visit.

I held the little black baby (Fuji?? hmmm… not sure) in my lap on the way home. She was a great traveler. And then on the way into the house, she shit right on me. Or more like down me, as I was standing upright and carrying her into the house. Maybe she didn’t know where she was going. Maybe the thermometer jiggled something loose. Maybe she was just so happy to be home. Whatever the reason, I had to hose off the driveway and clean up the stair step in the hallway. Take that, Mommy, and see what else you get the next time you take me to the vet. I consider myself warned.