Toby, our new boy cat (yes, the name that I originally ordained ended up sticking for him, whereas we are STILL unsettled on a name for the Baby Peanut Tiny Little Blackie Kitty), has picked up the rather annoying habit of showing us how much he loves us by standing on us between the hours of 5 a.m. and 6 a.m. Every. Morning. He’s an equal-opportunity stander, too – no favoritism from this fella! He’ll stand on first one of us, wait until we are awake, and then move on to the other. If we don’t acknowledge The Stand, he’ll lean over and touch us nose-to-nose. If it wasn’t so freakin‘ early in the morning it would be rather cute. I guess it’s better than having him sit straight down on my face with his cat bunghole (thanks, Stanley, I haven’t forgotten that!).

The Baby is still super-adorable. She is finally able to jump up onto the bathroom counter in the morning and she’ll curl her cute self into the sink and watch while we pee, shower, whatever it is we do in there. Makes it difficult to brush the teeth, however. But I can’t move her, because we all know that No One Puts Baby In A Corner. 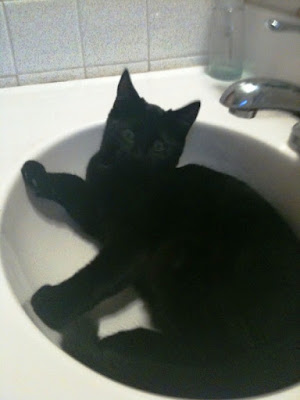 Kenny has still been indulging her desires for a daily fresh cuppa ice water on the coffee table as her drinking dish. It’s been knocked over twice and that little indulgence may soon come to an end. I asked Kenny why he caters to her like that and he replied, “Because she’s just so fucking cute!” That’s hard to argue.

So that’s the cat update. Now, onto other, even less important, things. 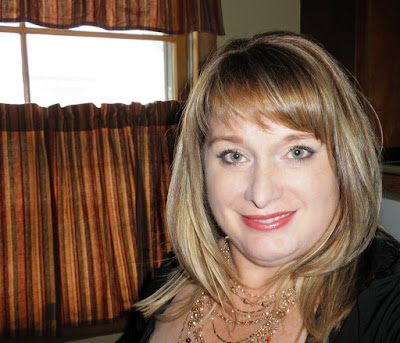 The above photo is for Mr. Murd. I had a hair appointment Saturday morning and he was curious to see what type of head shenanigans would unfurl. We stayed with just a simple color refresh and some lowlights to winterize it up a little, no cut and nothing crazy.

Five weeks ago when I was there I wanted to get it cut short, into a little “bob” or whatever and my stylist said NO. She told me that I would have to tell her to cut it short for two appointments in a row before she’d do it and of course later I was glad she didn’t do it. Especially with that humidity in Alaska, I would have looked like a frizzy puff ball with short hair. So there ya have it. Kenny asked how much this little number cost. With a manicure (we had a wedding to attend Saturday night), $114. Holy smokes it’s expensive to be a girl. That’s without a haircut, People. Just the color and blowdry and nail polish. Normally, it scares $150 with a cut, no nails, before tip.

I was talking to a co-worker last week and she gets her hair cut by this guy Edwin Fontanez , who has cut the hairs of Jennifer Aniston, Cindy Crawford and Reese Witherspoon, to namedrop. Needless to say, I’m chomping at the bit to indulge myself with a cut from this dude. I don’t know what I think will happen, that I will suddenly look JUST LIKE Jen Aniston, like we’ll be twins separated at birth if I only had the right cut, but I’m still intrigued by how great it could potentially be. Now, he charges $110 just for a cut, with color it’s $330. I used to have a Honda Civic – brand new, cute sporty red two-door with a sunroof and CD player, that I paid $179/month to ride around in it. My FIRST HOUSE – a double in a shitty Cleveland neighborhood that needed gutted and rehabbed, granted – mortgage payment was $325/month. For a HOUSE. So. I haven’t made an appointment with Mr. Edwin Fontanez as of yet. Those prices aren’t even including a tip, which I inquired as to how much that should be and the girl tips $80 when she gets the whole shebang, $20/30 for a cut only. I tip $20 to my girl, no matter what she does, but I did find myself giving her $23 this last time because I secretly felt like a cheapass after hearing the story of an $80 tip. Yes, I see the humor in the fact that I threw a whole extra three dollars onto my tip to make me feel better. I don’t believe I can’t afford to look like Reese or Jen.

P.S. I realize I look every bit like a middle-aged woman in the photo above. And for some reason I photograph with some sort of a darker mark on my chin, which I really don’t have in real life – I’ve looked. Unless I am just blind to my own flaws, but I think I’m rather harshly realistic with myself so I don’t see how that can be the case. Huh. The dew of my youth is long gone, if I ever had a dewy youth.

P.P.S. Remember the post where I used the vibrating mascara, and how it makes a stronger eye impact and is super-duper cool and snazzy? Well, I stopped using it for a while because it is just so hard to remove. Make-up remover, scrubbing, face creams – nothing takes it all the way off and I wake up with dark racoon circles the next day which I have to fight to finish removing. I pulled it out for Special Occasion Eyes for the wedding and it was just as big a pain in the ass as I remembered so I’m throwing it in the trash. Fifteen wasted dollars. Don’t buy it unless you NEVER want to remove it.

On to the next blurb.

Sophie went to the doctor. She doesn’t have cancer in her butt (which I found out that was her fear) and her hernia is going to be ignored since it isn’t causing her any pain and she’s 92. A rather anti-climatic end to that whole batch of Worry. But I’ll take Anti-Climatic vs. Intense Worrisome Concern.

It’s been a fast last week, with nothing exciting to report, and much the same can be said of the weekend. Friday night we visited Marge & Stanley, Saturday was the wedding (which I scored with a really huge hunka take-home wedding cake!), Sunday we slept til 11:00 a.m., I made a pot of chili, we went to Cleats and watched football with our friends and that was that. Here I sit, after a nap in the recliner, wasting what’s rest of the night.

I thought I had some rather interesting tidbits tucked away for blogging purposes, but I must be too addled from over-sleeping and chili to remember. Maybe it’ll come to me. Maybe this will be as good as it gets. Only time will tell. Hey, I did have one little snippet from which you’ve been spared! I thought I had taken a video of Twinkle eating a Twinkie, but it didn’t record. So when you’re sitting back scratching your head thinking THIS is lame, smile with relief that you didn’t have to read about and watch THAT!