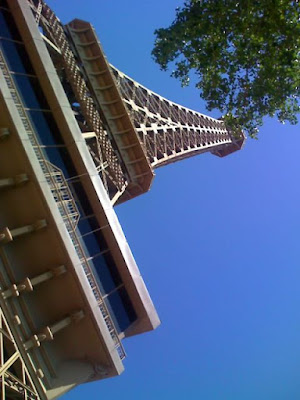 This was my view over the 4th of July weekend, spent lounging around poolside at Paris Hotel in Vegas.

Yes, I know you may find it hard to believe, but I actually tore myself away from the casino and hung by the pool, not just once, but twice. I read my first Danielle Steele book there. Expectations are lower when reading by a body of water. It was the perfect easy read for a poolside lounge-about, with an $18 drink in my hand. It was a fun, if quick, trip. A big group of us went, but par-for-the-course, I rarely saw some of the people, and didn’t even see our friends Kim & Jim at all. Some got in on Thursday, some Saturday, some went home at different times – it really was only “travelling together” in the loosest sense of the words.

Here are some highlights at it pertains to me:

Same night as facial, two separate dudes wanted summa dis. No, I wasn’t hallucinating – Kenny was right there with me when one of the overt flirations occured – he must not have appeared threatening. Yeah, that was $150 well-spent dollars – I was a magnet! Or maybe it was my giant ….er….. 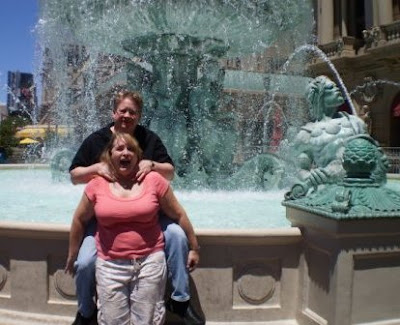 2. While at The Wynn, we wandered in to the High Roller area. I had to pee, and was delighted to use their facilities. I was also a little worried they were going to tell me I couldn’t pee there, but then thought “they don’t even know who I am – I COULD be a high roller for all they know.” I had an attidude and they never even batted an eyelash my way.

The toilet didn’t disappoint, and in fact was worthy of a photo. It was a single-stall unit, complete with beautiful decor and a little etegere filled with high-roller amentities: hairspray, lotions, mouthwash, powders, etc. I of course tried all of them and felt quite ritzy. I felt like a Wynner. 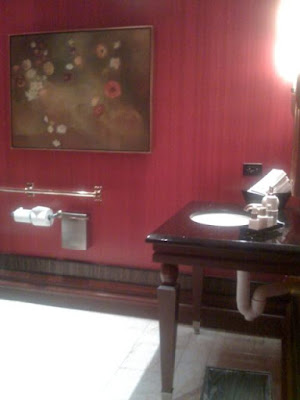 While I was in the bathroom Kenny took an illegally-gotten photo of the highest-dollar slot machine in Vegas: $5,000 a pull. Yep, we were right where we belonged in there.

This is just a cool little area near the entrance of The Wynn. 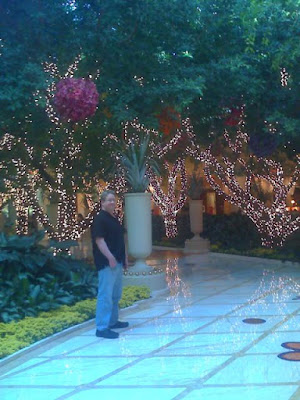 3. The morning we were leaving for home, Kenny and I played some Supertimes Pay Video Poker, which is a game Kenny normally plays but I don’t. It was a profitable morning for me, I quickly won $3000! After collecting my winnings, we still had time to kill so I played another Supertimes pay 2 machines down and won another $1000. It was definately my morning – and Kenny’s, too, as I was a good sharer.

4. Once we got to the airport, they were handing out first-class upgrades and I was in the right place at the right time and scored a seat in 2A. Poor Kenny, he was back in steerage. I inquired about buying an upgrade for him, but it would have cost $700, and that just wasn’t happening, not even with my recent winnings. Two hundred dollars, yes. Seven, no. Sorry, sucka. See ya in Cleveland.