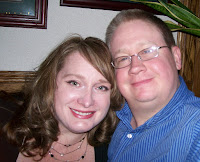 Happy Valentine’s Day, all you Lover’s out there! Mr. Anderson and I had a tumultuous start to the day. At one point I even blubbered, “You just got me a paper & ink card, it doesn’t even have a me-to-you connection!” He told me that I needed to stop analyzing cards.

The real kicker came Friday night when we exchanged cards a day early and there were no chocolate covered strawberries for me. He told me, “We don’t need them.” Huh. I told him that if we were taking things away from the holiday, I had an idea of another thing we’d be doing without.

Mr. Anderson wasn’t having his finest day of making me feel special and loved. It started with some snarky comments from him, thinking he was being funny, and not settling too well at all. He was warned his little jokes weren’t being well-received, but he’s a little thick sometimes and he didn’t quite realize what that was going to mean for him. Needless to say, it went downhill by noon (and we didn’t get up til 11:00!!). I threw the card I bought him in the trash, told him I was taking all those words back. He dug it out but I wouldn’t let him put it up. He had to put it under a stack of mail until I decide he can have it back. It was a whole show, complete with tears and my telling him he sucked, and that no one wants to be told on Valentine’s Day that they are “too fat for the berries” this year. So to make a long story short, he ended up at Malley’s (although by then it was a futile and unwelcome effort) and two disappointing boxes of berries are in the refrigerator.

We did make some recovery on the day, and went to an afternoon movie, seeing He’s Just Not That Into You. Maybe a poor choice on Valentine’s Day, but it was a really good movie. Then we had dinner plans at The 100th Bombers Squad at 8:00 p.m. so the day ended on an up note, which is why there is a smiley picture to post. But really, he needs to work on the wooing. Oh, at dinner we reminisced about all our past bad lovers and rekindled stories about how vindictive I am to cheating ex-husbands. He found out for the first time about how I cleaned the toilet with my first ex-husband’s toothbrush as I was leaving. It was my last act of wifely duty. Kenny was horrified, actually, and proclaimed, “But he could have DIED from that!” So what? I had really no other response… Kenny decided that if we should ever break up, he’ll just buy a new toothbrush to be on the safe side. Hey, don’t say you’re not warned. My second ex-husband knew I was a retaliater, and yet he still seemed surprised how it all broke bad on him, with the cops called to get his cheating fatass out of my house. I don’t play. Maybe Kenny will rethink anymore “too fat for the berries” ideas he has and do a little better in the future.

It was a strange day, that’s the bottom line. I wouldn’t say my best Valentine’s Day. I hope other’s had plans that were more well-received. I think I’d better stop this blog in it’s tracks before I wind myself up again and go punch Mr. Anderson in the head while he sleeps. Too fat for the berries, indeed.