The Bang Bang Theories
Let's Be Friendies
So my blogging seems to be taking on a “list” format lately. I guess I don’t have time to just go on and on and on with paragraphs about essentially meaningless stuff. Maybe one day I’ll get back to that. In the meantime, here goes another list ‘o items once again. It’s this or nothing (shut it for you out there who’d prefer nothing!). 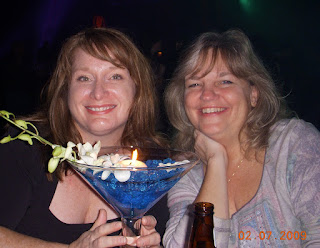 ekend in Canada with my girlfriendie Joanne. We had so much stupid fun, I can’t even begin to write about it because it wouldn’t translate as “fun” in print, you really had to be there, and if I try to describe how much fun it is you’ll say to yourself, “That doesn’t sound like that much fun” and determine it must have really been a little lame instead. It wasn’t.

I had tickets to see Celine Dion in Windsor, so off we went. Joanne had never been to Windsor before so it was all new to her. I had her try Tim Horton’s coffee, Harvey’s poutine (or poontang, whichever you’d like to believe), we (or I, but I don’t like to point fingers at myself) flirted incessantly with boys in uniforms, danced ourselves silly at the After Glow party at Caesars (I busted out my Stayin‘ Alive moves, much to Joanne’s delight), gambled a bit, napped and ate. It was a full weekend of shenanigans. Now it’s back to reality and I really need to do some shitass work tonight before I go to bed, regardless of how tired I am and how much I’d really like to be in bed and fast asleep by 9:00 p.m.

Kenny had a Man Weekend at home. He hung out with some guys, played video games and drank a few beers. He also took care of the cats and cleaned the cat litter box. I had a better weekend than he did.

Twinkle’s doing pretty good on his insulin. I need to take him back to the vet this coming week, he should have went last Wednesday or so but I worked too late to get him there. So we have that on the to-do list for this coming week. I think he’s doing pretty well, he’s perky and chompie and frisky and kinda bad, really. Exactly how he should be acting once again. He doesn’t like his shots, though, and gives me the bad eye. I’m still hoping we can fix him with better food.

Wow, so this is a really lame update, and not even a list at all. I’ve got Very Important Things to do, though, and none of them are fun things so I have to get busy with that if I have any hope of getting to bed tonight – not to mention some welcome home sexnanigans. Your entertainment is secondary. How does that make you feel?