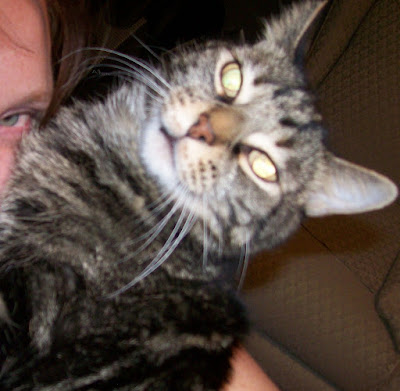 The Twinkle near my eye is sick. I knew he was just a little off, I’ve felt like it for a while now, but kept tamping down my instinct. He’s only six, and pretty stinkin‘ cute – how could something really be wrong with him? Well, it is.

He went to the vet this morning based on his mother’s hunch, he has just been a little “off” and has lost a pound. Not concerning on a person, but a pound on a cat is notable. So he had $151 worth of tests, and the results came in that he’s A-Okay other than diabetes. Fucking diabetes. Again. Here we go, back to shots twice a day and keeping a close eye on him in general.

Drat. I don’t know anymore. I had some type of a nervous breakdown crying fit and pity party all rolled into one jagged spell. I don’t want HIM to be sick. I only had ONE sick-pet-free year – now I’m back to the drawing board, and he’s young so I will have many years of this ahead of me (if I’m lucky!). Not to mention the added pet expense. Insulin is up to $45/bottle and it should be replaced after 30 days (I never knew this, Newf got new when it was all used up), not to mention the tests we’re going to be scheduling while we get him monitored. And then there’s the imposition I’ll place on people while I gallivant around the globe during extensive travels.

But. He had his first shot tonight, 2 units, and never even noticed what was happening. And then he was a little more interested in things around the house, getting a little of his frisky back. The vet told me that he would have never guessed anything was wrong with him, everything else is perfect so it’s caught VERY early. His little cat levels were over 500 – normal range is 80-100, with concern coming in over 200. He was on the very high even of the spectrum.

I’m drained and depressed and sad and angry. Why my pets, all the time (she rails her fists towards the heavens and weeps). I’m taking two Tylenol PMs and calling it a night. With my cat.