“You have a lot of stuff,” Rita stated as she surveyed the eight boxes lying about my office as I prepare to switch cubicles Friday morning. With the restructure everyone is shifting around, and I am moving about five steps from my current office. I’m taking this opportunity as a chance to weed out a bunch of shit that’s been following me around for, oh, say the last fifteen years or so. Some of it had a place on a shelf, but the majority of it was shoved in a drawer for the last three or four jobs. So I’m cleaning it out, and still had eight boxes of stuff to move after the weeding. Now, five are work-related, but that doesn’t detract from the fact that I have three full boxes of personal shit.

So I gave Rita and Kelly full reign to go all Clean House on my ass. They made me dump a bunch of shit I’d found impossible to part with. Now, a week ago when I first started clearing things out I designated a table in the atrium as a “Free Stuff” table. One man’s trash, another man’s treasure and all that. It’s been a good time watching some of this stuff get snapped up, and others in my area have followed suit. We were setting really absurd things out there, some of it a test to see just what people will really take if it’s marked free. Some of the more interesting things have included:

So today, after my co-workers Clean Housed me, these items that I found it difficult to part with are now up for grabs: 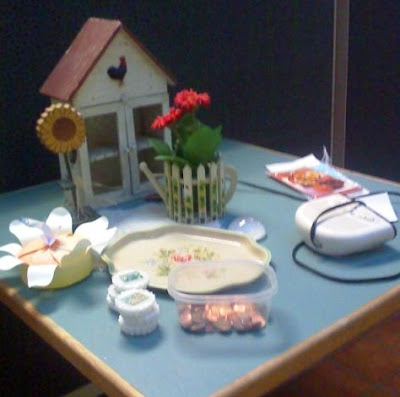 I know, it’s Treasure Overload. Items include: a paper flower someone made at least ten years ago, some stinky candles, a clock radio (it does work, but what the fuck do I need it for, I have an Ipod and reception is sketchy anyway), a variety of wooden bric-a-brack with a country flavor, a bird house/chicken coop caged thing of some sort (I have no idea), a tray and a Tupperware container of pennies that were just junking up my office space.

Rita commented, “If I were guessing the profile of the person who owned this table of stuff, I would say 62 year old female, 4 kids and 10 cats.” Sadly, true. I’m a hotmess of collectibles. Rita did let me keep my Elvis knick-knacks, she said that while they’re a little odd, they are a more truer reflection of me than the chicken coop wire birdhouse thing and the doilies. I’ll be interested to see tomorrow how much of this shit is still sitting there. Oh, yeah, there was also a stained “doily” which I hesitated to put out there. Kelly informed me it will be the coup de gras of the free table if anyone takes that thing.

Kelly and Rita told me they were proud of me for letting go, and then Kelly gave me a Niecy Nash grunt of approval.