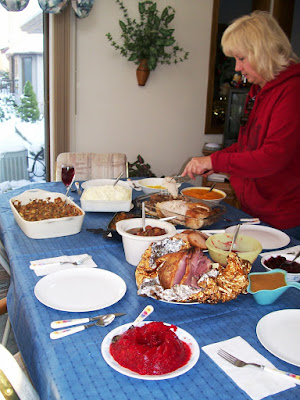 Good thing we didn’t plan on cooking much this year. Thanksgiving was celebrated at Marge & Stanley’s house, with just Linda and myself as additional company for the main meal schedule. Kenny had to work, so he joined us later in the evening for his holiday platter. Sophie was a tentative, and she balked at the last minute, she said she hadn’t been feeling well. She spent the holiday alone again, in her little house, but at 91 I guess she can do what she wants. I’m done cajoling. I’m supposed to go out there this afternoon (her plan), but am going to decline. I don’t feel like it today, I need a day to get things done (such as this very important time-spending activity).

Here’s Linda with her Japanese Chin, Mickey. He’s a pretty good boy, but doesn’t really have much use for me. I’m okay with that. 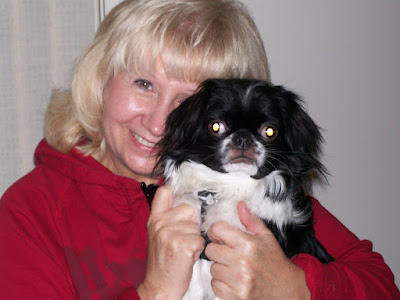 He runs from Kenny, too, but Kenny will pursue him til capture, and then try and Dog Whisper him. 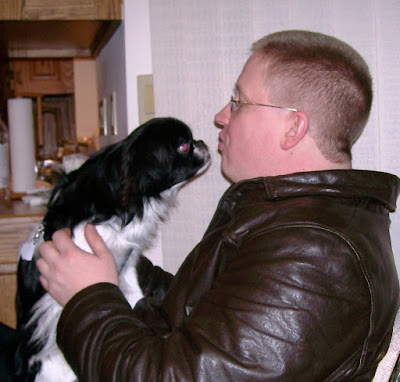 After a nice day spent visiting, eating and listening to some Christmas music, we ended the day on a pie note: 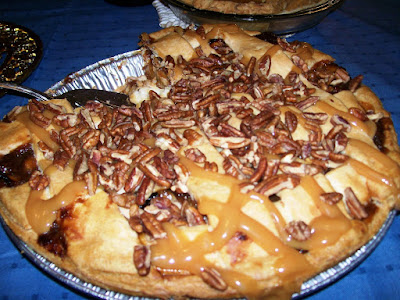 Apple-Carmel with butter-pecan ice cream and pumpkin with cool whip.

All-in-all, a nice quiet day spent together. As we were leaving Friday morning for Atlantic City, I didn’t need a hopped-up holiday event. We took very little leftovers home with us since we weren’t going to be around, and finished the evening up by packing for our trip. We had to get up at 6:30 a.m., which is fucked up. Who plans a trip that early on a holiday?? Well, we did it, but not without a fair share of complaints.

Our trip was fun, and I liked it even more since it was just one night. I like being home with a whole day to get caught-up before the start of another workweek. We gambled a lot and I was nearly broke by 3 p.m. on the first day. Things were looking downright grim. Ken and I went to the room and decided to take a nap. I needed a timeout from spending, as it wasn’t really working out for me, and we were both tired from the early morning. So we napped and Ken headed back to the tables around 5:00 p.m., and I continued to nap until about 7:30. I wandered back downstairs then, with my lowly $40 in my pocket and $200 in pity-money from Kenny. He’d been doing pretty well at three-card poker, and while I don’t mind sharing in winnings, pity-money leaves a sour taste in my mouth so I wasn’t eager to spend it. I played some game with my $40, and managed to parlay it into $100. Then I joined Kenny at the card tables and finally caught a break, ending up with $750 back in my pocket and Kenny’s $200 handed back to him. It was a good ending to the day! I didn’t have to stay in the room on Saturday reading the 3rd book in the Twilight Series. I brought it with me, just in case.

Saturday ended up pretty good, not ahead, but we didn’t get a total bad-beat. The money that came home with us will be traveling to Vegas in less than two weeks.

I’ve got some surprise shit to take care of today. Well, it was a surprise on Thursday night. When I went to pack for our trip, I looked in one of our bigger suitcases and discovered I haven’t unpacked it since our cruise. What the fuck! I thought I was all caught up with every stitch of laundry last weekend, but there was a whole suitcase full of more stuff. Nothing I had apparently been missing, mostly warm-weather wear. But it still needs to get washed and folded and packed away for next year. Huh. I used to be so on top of laundry, I would unpack as soon as I got home from a trip, but that doesn’t seem to be the case any longer.

I’m going to go do that as soon as I get done sitting in the recliner. That may take awhile…