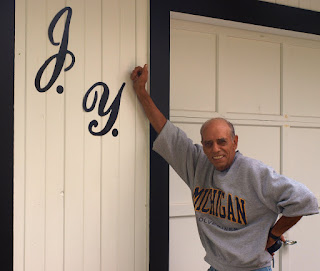 Meet John Yoby. Pleased to meet you, too.
Sunday was Family Day, spent with my grandmother Sophie out at my Uncle Sonny’s (a.k.a., John Yoby’s) house.
Anyway, like most things where Sophie’s concerned, she never just comes out and says what she’d like, but rather beats around the bush and then acts indignant when it doesn’t pan out. Last Monday she told me that my uncle would really like to see me, but I never get out to her house in time when I go over for a visit to make the drive over to his place. It’s a good thing I’d just come back from the Artist’s Ret 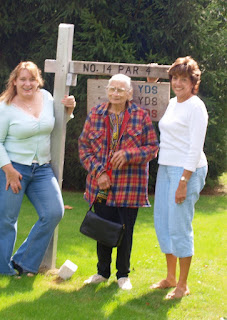 reat weekend and still had my Zen-vibes, so I didn’t lose my patience. “Sophie, if you want me to drive us over to Sonny’s, JUST TELL ME AND WE’LL MAKE IT A PLAN!!” It’s not that difficult, if everyone KNOWS in advance. I’m not going to just drive to Oberlin and hope for the best, that everyone is home and just sitting around. I did find out, though, just exactly WHY she thinks it can all just come together without a plan. It seems that one time – a million years ago – my ex-fucksteve and I happened to pop over for a visit with Sophie, and Sonny was out there, too. So now, because of that one time, why should plans need to be made – it spontaneously happened once before. God grant me peace, please.

So anyway, we made a plan for this Sunday. Sophie wanted me to check out all his flowers and the work he did around the house. As a bonus, since we did that crazy planning in advance thing, my cousin Dawn and her husband popped over and it was Bonus Visiting. I haven’t seen Dawn since Sophie’s 90th birthday party a year and a half ago, so it was nice to catch up. See how nice planning can be??

We took a bunch of pictures, and you can now enjoy my visit with me. The most important thing you need to know about my uncle is that he is an avid collector and always out to make a buck on some of his treasures. He hit me up as soon as we arrived, leading me over to his treasure trove of jewelry. Here he is digging around in a box of jewels. He gave me a bracelet, no charge! But tried to sell me this magnetic necklace thing for $10. I declined, I have enough sh…er, interesting pieces of jewelry, and don’t really need a magnetic necklace. If YOU need one, lemme know…I know where you can get one ~wink~. Rob, if you need something special for a special birthday for a special someone, just say the word….Anyway, here he is diggin‘ around in his box o’ stuff: 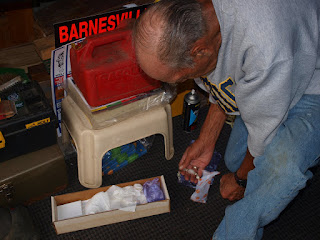 Here are some of his other collections, which he has them very tidily displayed throughout his various barns and garages. Some cool bottles: 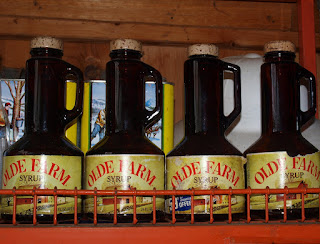 Sonny gave me a couple of 50-year old cans, “No Charge.” They are really cool and will look nifty one day in my house. Not sure where in this house, but maybe I’ll be able to find a spot. They’re priceless to me, since they’re something from my Uncle that is no charge – that’s rare. As rare as this: A newspaper from the Moon Walk: 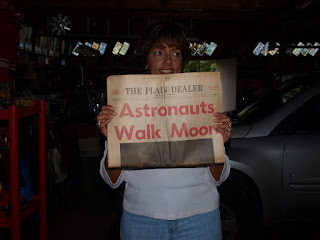 Dawn and I played with his antique slot machine. Notice the collection of license plates he has hung around the top of the garage. The collections are endless. 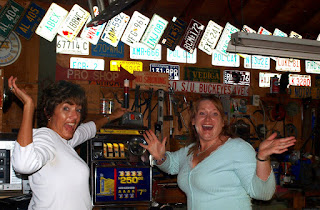 He has cars and bicycles, victrolas and banjos. Lots of stuff, all neatly arranged and For Sale for the right price. Even Sophie, if the price were right. 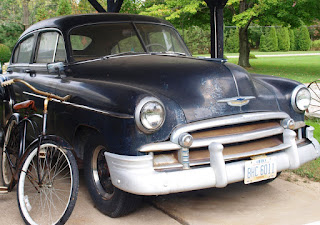 After we took an abundance of photos, we were drawn next door to the sound of a donkey braying. 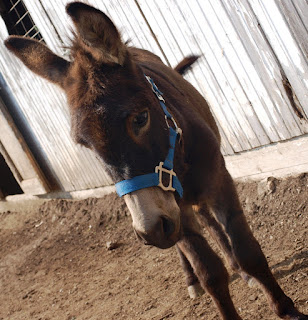 This little fella lives next door with another little donkey friend and a couple of bully-ponies, who just rear back and kick the shit out of these little guys. 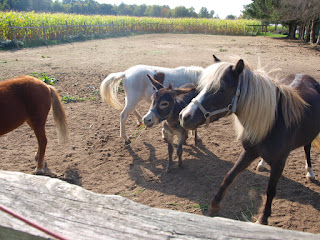 We fed all of ’em some grass, even the pony kickers. I wanted to bring that little donkey home with me, but he probably won’t fit in very well in Parma. Someone would wanna make sausage out of him, probably.

More photos were taken, here is Sonny, Sophie and Dawn: 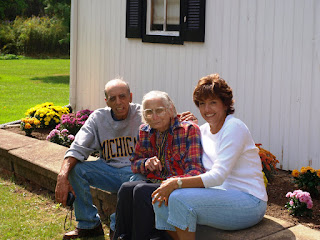 And then Uncle Sonny took this one of us, and told us all to say Bullshit. I must have been adding my own curse words, as I’m the one apparently still talking: 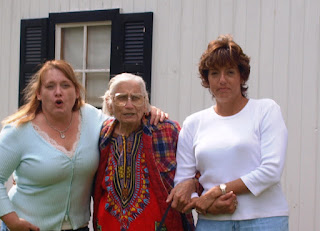 Sonny and I headed across the street to see all the farm animals the at the other neighbor’s house. It’s a mini-zoo: chickens and hens, ducks, horses, peacocks, and this cute little Billy Goat: 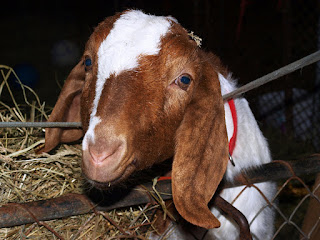 I really am a City Slicker, as cute as he was, I was to afraid to pet him. He looks harmless enough. Yeah, they all do – right before they eat your arm off. He wasn’t fooling me with his cute little tipped-out ears and charming little smile. Nope.

We walked back by their pond (yes, it was another weekend of trampling though other folk’s yards uninvited), but I high-tailed it outta there when a couple of huge geese started waddling our way. Those things are NOT a toy.

Saw a tractor drive on by: 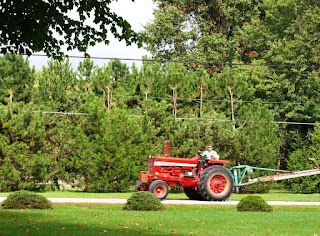 And after a nice three hour visit, we said goodbye and headed back home. 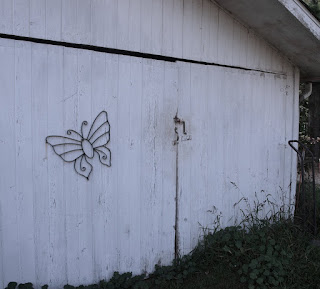