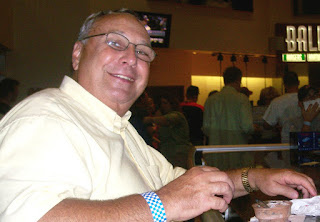 Ken and I were lucky to enjoy Dan’s birthday with him at an Indian’s ballgame. Dan won Club Seat tickets for four back in July and he & Bev took us as their guests – lucky us! I’ve never been in the Club Seats before and I think I like it more than the loge. Definitely more food choices, and since we only drink a couple of beers anyway, we don’t care about paying for drinks. I especially don’t care, since Kenny paid for ’em – hahah!

Here are some random, poor-quality pictures from the festivus. I didn’t bring my super-duper fancy camera, I took the smaller one that fits in my purse. Exactly what I feared would happen with the purchase of an expensive camera – I don’t want to pack it around most of the time, when I have a small one that can fit in my little travel Coach. Ah, well. I will be taking it on vacation, so hopefully it will earn it’s place in my life.

Here we are heading out to the game. It had rained all day long, and the 1st game had a lengthy rain delay. As a result, we got to enjoy a very humid evening. At least the Club Seats had a nice air-conditioned dining/drinking area. 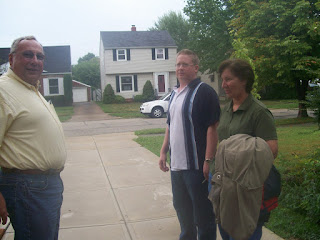 See that house in the background – the Colonial? It’s up for sale, a Hud House now, the owners got divorced because he got caught with a-cheating on his mind. Well, not just on his mind, but on his wiener, too, so the Maligned Wife ordered a U-Haul to the house while he was at work one day and hauled everything out. He came home to quite a surprise – and of course I applaud her. I’ve thought about checking on the price, it looks nice from the outside, and the street rumor is that it’s going for a steal, but I don’t really need another house with bad Karma. Dan told me there’s one up for sale for a good price in his neighborhood of Seven Hills. I’m interested in checking that out. But then again, I’m interested in going to Australia and the Mediterranean, and might throw in Alaska before I settle back down to a mortgage payment. Ah, life’s one giant trade-off. But I digress. The ballgame: 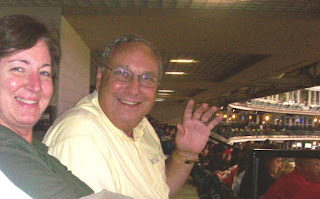 Dan & Bev in the Club Seats. They weren’t our assigned seats, but they had more leg room and were empty so we took ’em and no one seemed to mind. Our assigned seats were more in the mix of people and it was too humid to sit there when perfectly good seats were not being utilized. 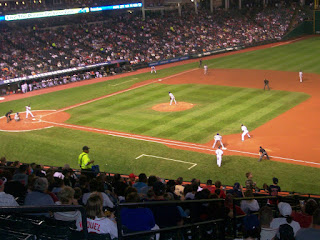 On the way out after the game: 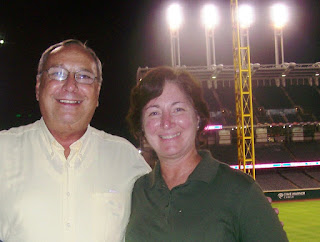 We lost, but had a hopeful moment at the end, when the Ducks Were On The Pond and Hafner was up to bat. It was a tall order for him to Grand Slam ’em in, and he didn’t. Ah well. We played a pretty poor game overall.

The humidity hadn’t been good on my hair at all and I was a tich on the shiny side: 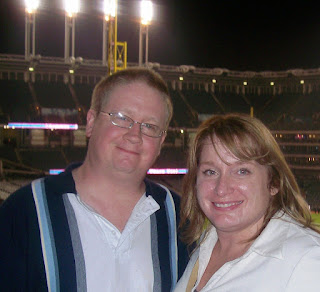 I am sportin‘ a new, darker hair color. I mixed up a new concoction last Friday night, combining a couple of colors and it turned out pretty good, if I do say so myself. Not so much reflected in this photo, as the humidity wasn’t my friend, but I still likey the color. And it’s $4.60 vs. $184.60 with my home brew. I have an appointment scheduled with my salon for the end of the month, wanted to get a professional job before vacation, but now I’m reconsidering even doing that. We’ll see what the hormones dictate by the end of the month.

And that, as they say, was a Home Run of a night of fun. Well, I’m not sure if anyone actually says that, but I just did so now officially someone has said it.

I captured an elusive picture of the elusive Widda: 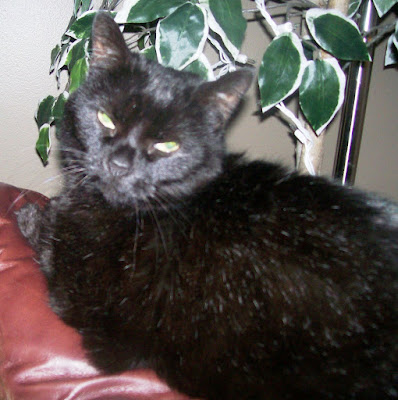 She’s been enjoying time in the living room with us and has taken to sitting on the back of my overly-puffy chair, right above my head. Kenny and I have decided that we’ll always have a black cat named Widda, and we’ve even picked out a name for the replacement: Widda Redux. Mancy & Fsteve will probably steal that name now, since she’s still incessantly cyberstalking me, but whatev. I’m not going to let her obsession with me cause me to self-sensor. No one puts Baby in the corner!!

My friend Rob has his next book started. It’s starting out quite nicely. I’m falling quite behind and now need to get something of substance written. I’ve got the Artists Way Retreat this coming weekend, and I’m taking my laptop with the intent of getting a strong creative start with time to myself and my creative juices unleashed. That’s the plan, anyway.

I still haven’t let go of The Glass Castle book yet, still replaying it a little bit. I did buy two new books while I was at Borders yesterday, I’m working on stockpiling my cruise material. But I might start one of them today, it looks short and funny, and who couldn’t use a hardy-har-har sooner rather than later.

Speaking of the upcoming cruise, we’re on Major Countdown Mode right now. Less than three weeks. I’m not prepared yet – either at home or at work. I have a lot of projects I need to get finished up at work – it’s going to be a busy week. And I need to start getting my stuff compiled that I’m taking with me. I need a new suitcase. We’ve decided to just buy 14 days worth of socks rather than spend time sorting and matching, which is one of my most hated laundry tasks. “When I’m a famous, rich novelist, I shall wear new socks every day!!”, the wanna-be writer adamantly proclaimed from her overstuffed-to-the-point-of-uncomfortable leather chair.

Alrightie, then, on that note I’m off to do something more productive. I need to Google tethers for my Olympus camera lens, it didn’t come with one and I’m not even sure one can be attached, but it’s quite inconvenient as it is prone to just falling off. I need to find a solution, if one exists.

Peace be with you. And also with you.