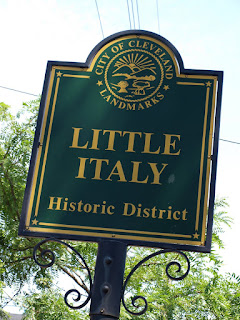 We may not have the longest summer in Cleveland, but our fine city does manage to pack a slew of festivals into the short season. Sunday the Boys and I headed off to Little Italy for my first-time-ever participation in The Feast of the Assumption. Neither of us were sure what we would be Assuming, but we did know what we would be consuming: sausages, gyros, pastas and cannolli’s. And anything else that struck our fancy. 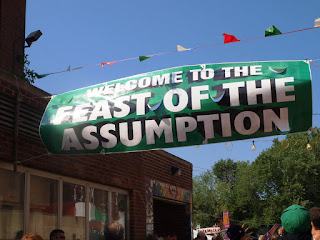 The weather couldn’t have been more beautiful, but the heat managed to creep up on ya if you stood in the sun for very long. Luckily, Tim wore 2 shirts, one with long sleeves. He was rethinking his getting dressed decision after the first hour or so.

Ken and Tim managed to find beers straight-away, while I opted for a Bacardi Mojito. 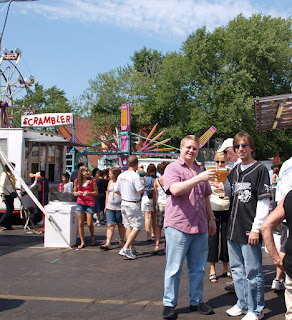 They played a little dice, with Kenny coming out ahead by $26, and Tim made his charitable contribution to the church. 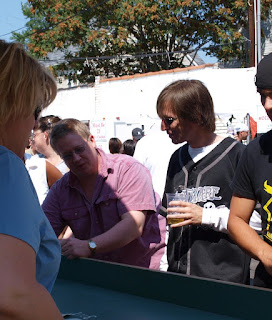 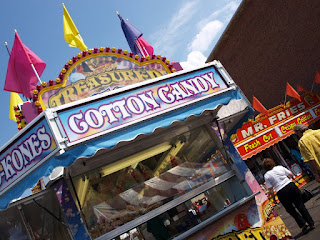 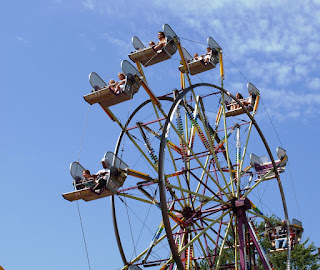 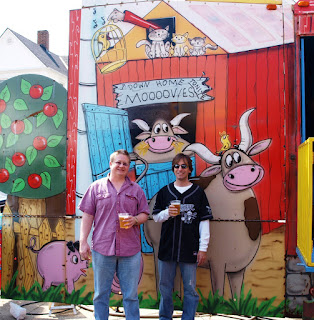 Lots of sausages being cooked up. I had one (not from this booth) which was fabulous, and I also enjoyed a stuffed eggplant concoction. Definitely some of the better fair foods to be had in the city. I have to say, I wasn’t even tempted by the “fried dough” stands, after reading that an elephant ear has 1000 calories and 55 grams of fat. Should be called elephant ass, because that’s what you’re going to get if you eat too many of those things. Not to say that an Italian sausage is a health food (I read they have 1,040 calories), but at least I feel there’s SOMETHING nutritional in there, even if it’s just the tomato sauce and green peppers. 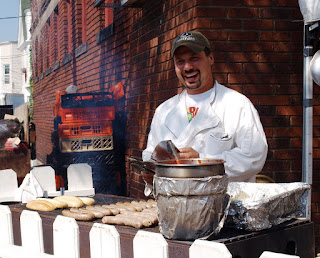 We had a fun time, enjoying three hours or so of bustling city life before heading back home. I was drained from the sun and ready for a nap. While I didn’t actually nap, I rested for a while, getting up only a short while ago while Tim & Ken went to the movies. I have a speech to prepare for a training session on Tuesday & Wednesday of this coming week, and I still haven’t started it. What the fuck kind of assignment is that, anyway? I would have never signed up for it had I known that was part of the deal, but now it’s too late, with non-refundable department dollars so go I must. As a result, this will be a shorter photo-blog so I can get busy with that before midnight.

Other, Even Less Significant Parts of My Weekend

Despite the heavy complaining I did regarding housework on Friday, I finally managed to accomplish a lot and was happy to awake Saturday morning to a very tidy place. I treated myself by doing very little else around the house, except for some random loads of laundry and putting some Drano in the pipes.

Saturday was one of the very few days where Kenny has to get up and be someplace before me, he had an 8 a.m. meeting for work. He was quite cantankerous about it, but still managed to get up at the first sound of the alarm – he is not a snoozer, like me. He just popped right out of bed, even though he had very little sleep as he worked Friday night til 1:30 a.m. So anyway, that set the tone for him for most of the day, when he came home he headed back to bed for a few hours while I went to the gym, tanned (if you can even call it that, I’m as white as I was 10 days ago when I joined the place), and really don’t know what else I did to piss the afternoon away. When he got up he wanted very mindless activities, so we saw two movies and had dinner on the patio at Champps. It was perfect weather, I rather hated to waste it indoors, but there ya have it sometimes. I need to get my bicycle up & running and start enjoying that…well, probably next year already, but one day.

Peace, I’m off to do a little homework. Yeah, I’m not mentally ready at all to go back for my Masters, I am too annoyed by this little project. Well, know your limits, that’s what I always say.