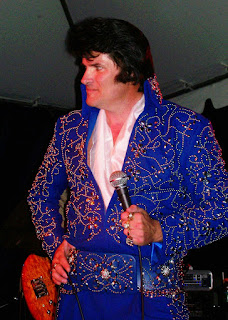 Summer wouldn’t be complete without groovin‘ to a little Fake Elvis, nibbling on some grilled corn on the cob and enjoying a cold draught beer from a plastic cup. 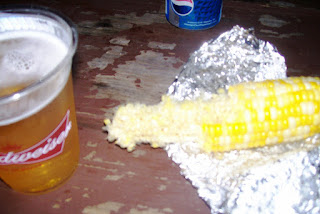 Wholesome fun was had at Brooklyn Homedays Friday night. Kenny thought I was drunk because I was all hopped up, singing aloud with Fake Elvis, knowing words to songs neither he nor Tim had heard before. But I knew them, as I do not exaggerate when I proclaim my Elvising runs deep and true. I know every inflection and gyration that any proper Fake Elvis should do. And I don’t need any beer to get my toes tapping, legs shaking, and out-loud singing to commence. I can’t help myself, the songs burst forth from my lips. And yes, Tim and I did shake up the dance floor for a few numbers! He was drunk, however. Kenny was busy running the sound, so he was exempt from having to dance me.

Our Fake Elvis was great, he did a fun job and I managed to get another Fake Elvis Scarf to add to my collection of Fake Elvis Scarves. And I’ve decided that in 2009 I want to go back to Memphis and do Elvis Town up once again. We’ve been pushing that idea aside every time it comes up due to the cost to go there, but Kenny realized that we can actually take one of his many free offers to go to Harrah’s in Tunica, which is about 20 minutes from Memphis. So we get free airfare right there, and a free hotel, rent a car and go get my King on at Graceland. I’ve already done all the tours there, but you can never see too much Graceland. So there, our first 2009 trip is in the hopper.

Saturday evening I took a drive over to Sophie’s, to finally catch up and deliver some bakery and magazines. I am back in Good Granddaughter standings, as I filled up a Tupperware container I was returning with fresh blueberries and strawberries. She would NEVER spend money on those frivolous fruits for herself, so it was a real treat. I also trimmed her hair, which is a really tough task, as she has her household scissors for me to use to do the job. Having been used to trim bushes in the yard, cut fabric and any other task that requires scissors, they cut hair very unevenly. Not to mention I’m not a hairdresser, nor have I ever taken any hairdo classes, despite what you may think based on my successful self-coloring attempts. So I’m just chopping away at it, following the doctors creed of First, Do No Harm. I figure an inch off the length can’t harm too much. It certainly could benefit from a professional cutting, but that would cost $12, so scratch that. The household scissors wielded by an untrained granddaughter will do the trick just fine, thank you.

Going Off The Deep End

I had to go into work on a Sunday, which is frankly just about the craziest talk ever, but sometimes it is necessary. Promotion doesn’t come without demands, apparently. We have a long Monday afternoon presentation, and I need to make sure my part is up and ready to go so I’m not running around crazed with stress on Monday morning. I’m much sharper on a Sunday afternoon than a dragging-in Monday morning. But the off putting part is, I didn’t even realize I was doing anything with this until Thursday. It’s part of my new role, but I only stepped in at the last minute to help with it. Whatever it takes, that’s fine, but I would have been gathering this stuff together sooner had I known. Oh, well, somehow it all gets done. Yeah, that “somehow” meaning working on a Sunday, usually. And late on Friday night as well….poor me 🙂

Ken and I enjoyed a late breakfast at the Colonial this morning, having corned beef hash, poached eggs and homemade potato pancakes. That should tie me over and fuel me for a productive afternoon. Since Ken’s working his last day at Brooklyn Homedays today, I thought it might be a good time to go see the Sisterhood of the Travelling Pants 2. I tried to convince Tim, but he said that was really too “homo” for him, although he normally embraces that pretty well – I mean, he’s a huge fan of Gilmore Girls, and I reminded him that Rory is in Sisterhood, and I did see him waver just a bit. I bet I could convince him. He admitted to Tivo’ing the 1st Sisterhood, but deleted without watching out of fear he just might enjoy himself.

In the interest of trying to get some actual work done while I’m at work right now, I will end this fine, fine post and hope that my computer at home is back to working when I try her again later tonight. Oh, yeah- I forgot to type that part, the fucking thing just decided to freeze, baby, and is not participating in it’s job of being a computer. I loves me some Vista…next computer, Air Mac. Or whatever it’s called. I’ve only had this thing for a year, it’s a piece of shit to work with. I mean, I have a demanding public that needs to read what I had for breakfast, for crying out loud.

Peace, until I blog again….