The Bang Bang Theories
Let's Be Friendies
Cutest. Purse. Ever. 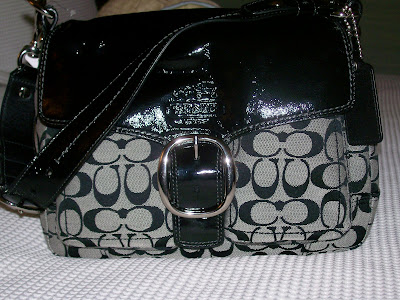 At least for this season, anyhow. I gifted myself with this cute little patent-leather/signature “C” pattern number and am tickled pink. Especially by the lavender interior lining.

Below picture on the flight to Vegas. Still a terrible picture-taker, but at least I managed to get the important one (me!) – ha ha! 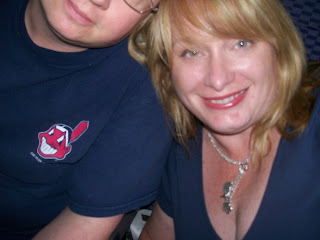 We’ve managed to LUCK OUT with airline seats our last few trips. We’ve had rows to ourselves, this time we had an Exit Row with no one in the middle seat. We could sprawl and stretch right out. On the way home we didn’t get Exit Row, but we still managed to get Row 11 all to ourselves. I started reading a fun book, so the 4-hour ride home Sunday night literally flew by (get it?? cause we were flying??). And gold star for me for the day with that little pun. 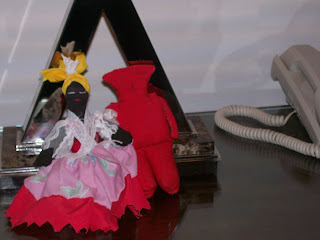 We brought our Haitian Voo Doo dollies with us again. We figured we were on a losing streak because the dollies were sick of sitting at home, so we’ve been taking them and have coincidentally having better gaming luck. Well, they must not have enjoyed the view, despite the lovely room they got to hang out in, because we were not nearly so fortunate this trip. Win some, lose many.

Below is our beautiful room in the Augustus Tower. They tried once again to stick us back in the Palace Tower, which is nice, but a hellova long walk. So I whined and they stuck us here in the schwanky place. Squeaky wheel DOES get the grease. It was purdy, I could probably live in this hotel room very easily. What more does a girl need, afterall? 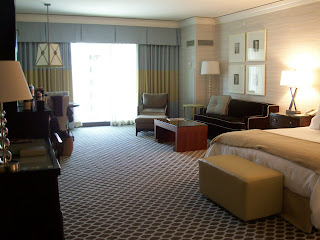 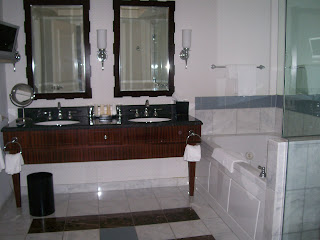 Even after the drunken debacle of Jacuzzi Tub Sex last trip, we STILL tried it again. Albeit sober this go round. Still, just as unsuccessful. Kenny got a Charlie Horse. Will we ever learn?

On Saturday I planned to have Nudie Pool day. Caesars has the Nudie Venus Pool area. You need to show identification to get in. I was prepared. I was going to let the Girls hang out in all their 39 year old glory, and get some sun. But alas, I started my Poolside Ventures far too late in the day and there was nary a lounge chair to be found poolside, Nudie Pool or Basic Business. I had to take my book back to the room and pout, replanning for Sunday and decided to use the Salon services on Saturday instead. I managed to get an appointment for a manicure. 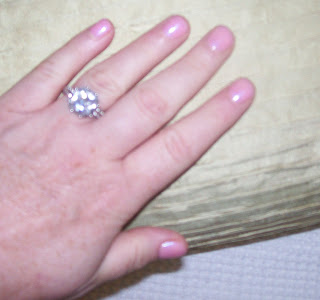 And while I was there, I got all caught up in the fanciness of the salon and decided to get a hair trim as well. I know,I know, it goes totally against my Salon Protest, but I’m a huge sucker for marketing, and it’s a totally cool salon. Luckily, I didn’t have Scissorshands working on my head, and she just trimmed up the ends and de-bushed the sides a bit. I’m happy with it. She actually complimented my color, which I secretly gloated about since it’s my at-home concoction.

I was a rather…..shocked into silence….when I saw the bill for these two innocent little services. I didn’t ask cost, I mean, if you have to ask, you can’t afford it or some nonsense like that I’ve heard. I figured, $40/manicure, $75 tops for a hair cut and style. WRONG.

Makes a pair of La Perla Panties seem like a bargain, in fact. Luckily, I had plenty of Comp Points to take care of the entire bill except for tip, so it didn’t send me into a heart attack. The manicure is even a worse deal than a pair of La Perlas – it chips off in a week (or less, as the story goes), the panties at least last and well, are a Piece of Art. Live & Learn.

Sunday dawned bright and early, and I gathered up my poolside necessities and headed on down. Paid $12 for sunblock at the Augustus Towers commissary. And was greeted by this: 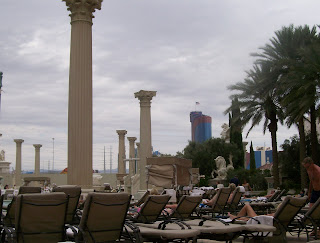 I found a lounge chair, but it wasn’t for long. Seems that this is “monsoon season” as we were told by a cabbie, and not 15 minutes after I got settled, it began to sprinkle. Having been in Vegas during a Gulleywasher of a storm, I let it drizzle for a few minutes, but once it started picking up speed, I picked up speed, too, and headed back indoors. Drat. There went all hopes for my Vacation Tan.

Had a very fun trip overall, with the highlight being the Garth Brooks concert on Thursday night. Best concert I’ve ever attended. Surrounded by tall, good-looking athletes, listening to my #1 Man, who could ask for better?

Peace, and do what you love with the one you love.