Happy Birthday, America! After a hectic Fourth of July day spent running errands and taking care of some things for my grandmother, Kenny and decided we didn’t want to miss out on fireworks, so we scadaddled up to Tri-C and made it just in time to spread out our new plastic-on-one-side-soft-fleecy-flannel-on-the-other blankie we got as our latest gift from Caesar’s Palace. We had a great view, until a family of idiots decided to stand directly in front of us…so we moved. Gotta love the inconsiderate nature of people. So we watched fireworks and canoodled on our blankie and just enjoyed a nice July evening in the city. It took us about an hour trying to get out of the parking area, but no worries, not as if we were in any rush to go anywhere. We used the time to chat and laugh and talk about people. Good times and a good, fun evening.

As I mentioned, I spent the better part of the afternoon with my grandma, I had picked up some new chair cushions and some living room curtains for her so I went out and got them all settled into place for her. The best thing I had picked up for her, however, was a bunch of celery. Sophie had asked me to keep an eye out for it, she couldn’t find it for less than $2.99, and she’ll be damned if she’d paying that much for celery. You would have thought I had handed her an Olympic medal when I presented her with celery purchased for the low low price of $1.79. I received the Star Granddaughter award for the day.

Our friend Dan was a Big Check recipient at an Indian’s game recently!! Somehow he was chosen for some sort of contest, and ended up coming in 2nd place to the tune of $100. First place won $10,000, which makes it a bittersweet Big Check award. I’m still trying for one of my own – I now know 2 people who have been Big Check recipients – Geri and now Dan. Who wouldn’t want to be a Big Check winner???!! 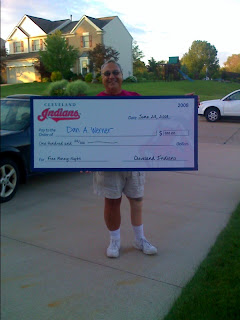 A Meeting of the Mindless

Thursday night was an impromptu night downtown for me. Kenny was at Shooters, he’s filming some footage for a DVD he and his friend are creating with the production company they’ve started (are starting/whatever stage it’s technically in, I’m not sure), and I had mentioned to some of the girls about it and they ended up down there. I didn’t want to miss out once I found out they were going to be there, so I got gussied up, called a cab and met up with everyone down there. Stef was teaching me her “stick out your ass and grind” dance moves. Somehow I managed to get quite tipsy, and I only had two beers!! Kenny pointed out that they were two 32 oz. beers, but still, it was only 2 beers technically. The evening ended with my climbing into bed with Timmy, where we talked about his fucked up relationship with his nutty girlfriend for about two hours. It went sorta like this:

Tracye: stumbling up the stairs, tells Kenny, “I’m gonna go get the scoopage on Timmy’s latest fight with Crazy.”

Tracye: walks through Timmy’s house, to the back bedroom, turns on overhead light, “Timmy, you up??”

Timmy: bolts upright in bed, rubbing sleep out of his eyes, looking disoriented, “What the fuck??? Oh, it’s you, come on over!” And moves over in bed, making room for me to drunk talk with him about all sorts of good drunk tropics.

Timmy was drunk, too, having been out earlier in the evening partying up his newly single status with the Mailman (or Maleman as he likes to put it).

Kenny said it was a meeting of the mindless.

Other Stuff of Even Less Importance

Timmy’s bathroom has been leaking from various points for the past few weeks. Started in the corner, ruined the flooring, it was deemed to be caused from our bathroom and the fact that I hang my body puff on the bathtub faucet. How a 1/2 oz. body puff could be blamed for that, I’ll never understand, but whatever. The puff was moved, and surprise surprise, the bathroom continued to leak. Only it had moved over from the corner of the wall to the ceiling, and when Tim took a shit, was getting dripped on by our shit water. Nice. So they came and cut a hole in his ceiling, replaced the wax ring in our toilet, and climbed up into our attic for God knows what reason. In doing so, they discovered our insulation was wet, and a roofer came out and found the real root of the problem: a 1/2 in gap between the flashing somewhere up there in the roof, and these heavy, heavy rains of the past few weeks have caused it to leak and somehow miss our house, but run down into his. Water’s a funny thing, but so far so good.

“What’s the point of all this?” I hear you sigh and mutter under your breath. Well, the point is, my house is a total trashed mess – still – from the attic shenanigans as well as taking everything out of my bathroom while they got to the root of it all. The attic access is through our bedroom closet, and that shit was taken out while I was at work, and let’s just say it’s a jumbled up catastrophe, not to mention insulation is mixed in with everything. I’ve been putting it away a little at a time, because I might as well clean out the closet and take everything that’s not regularly used to the basement for storage rather than have it in the house. It’s just all fucked up at the moment. What else is new.

But the real point of all this is, Timmy wasn’t getting shit and piss water dripped down his back afterall. It was a good day for him when he found this out.

Kenny had gas really bad last night, and made sure to walk ahead of me so I not only got caught up in the draft of it all, but the people walking behind me thought it was ME. I saw them fanning the air around them and pointing at me. Yeah, try to convince someone it’s not you, really, it’s the guy in front of me. Riiiiight.

And that, my friends, has been the Fourth of July weekend. Well, there’s more, but really, I can’t seem to make much sense so I might as well stop now and move along for the night. Peace.