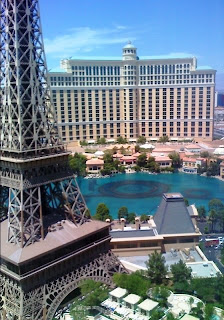 Greetings! This is gonna be short, don’t even get up for a cuppa coffee. It’s late, we had a very busy, fun-filled weekend, and no one really wants to hear any more about our trip to Vegas. For those who do, it is as follows:

Ate. At a few GREAT restaurants worth mention, Bobby Flay’s Mesa Grill and again at Bally’s Steakhouse where I enjoyed a $65 Kobe steak, and it was worth every comped dime.
Was propositioned in the hot tub/whirlpool thingie poolside at Paris. At least I’m pretty sure I was. Mind you, they have two whirlpool areas, in a secluded little nook past the pool, and nary another being was around so it seemed like a good time for a dip. I was enjoying my late-afternoon solitude until it was interrupted by some dude. He proceeded to tell me about a “threesome” massage he had the week before in California, blah blah blah. He’s a realtor in Vegas, so if I am ever house hunting, or in need of a threesome, he gave me his business card so I can look him up. Sheesh. I wasn’t even wearing my clip-on sex appeal (my super-sexy Jessica Simpson hair piece).
Five-hour delay going home. At least I had the foresight (for once) to have the concierge look up our flight status so we were able to hang out at our hotel rather than sitting around the airport. But our flight took on red-eye status and I ended up taking an extra vacation day on Tuesday that I wasn’t planning. We got home late, 4:30 a.m., no way I’m good enough to drag in on three hours of sleep. Maybe when I was 39, but not now.

Oh, yeah, and there was the drunk thing in the prior post. Don’t wanna forgot to mention that!

That’s the trip in a nutshell. Typical Vegas, my home away from home. Going back mid-July, to see Garth Brooks. Can’t wait! Oh, yeah, the picture was taken from our hotel room, we could see the Bellagio water show and it was quite pretty. Too bad I didn’t think ahead and get a picture with that, it might have actually made the photo interesting….It actually turned out okay considering it’s from my camera phone.
Time for 1-800-GAMBLER?


So what makes good sense after coming back from Vegas?? Well, let’s go to Erie and gamble some more! Since it made such sound sense, that’s exactly what we did on Sunday. Kenny had a mystery voucher he wanted to redeem, they were all winners, with a potential $10,000 jackpot prize (Kenny had a $2 winner). I threw mine out when it arrived a few weeks ago, assuming (apparently incorrectly) that there’s no way in hell we’d be doing more gambling the same week we come home from a gambling trip. Silly, silly girl.

The place was PACKED. Seriously couldn’t walk around. Don’t even think about getting on the machines I enjoy playing. So I walked around for a while, found Kenny at his favorite machine and he told me to go sit at a machine behind him and play, which I did. And with $30 in the machine, I won this: 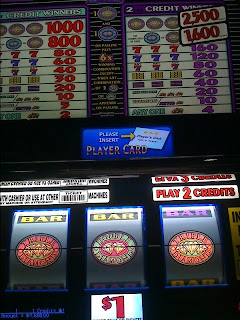 Shortly thereafter, Kenny won $2,000 on the Wheel of Fortune. We were quite lucky, and came home with A LOT of money in our pockets. Which is why this is getting such a late post.

Why Didn’t She Tell Me?

Saturday afternoon Kenny’s mom Linda and I went to my aunt’s house for a psycho…er, psychic reading. She just read tarot cards, so I was underimpressed. She didn’t tell me she foresaw a jackpot in my near future. How could she not have seen that??

She did, however, tell Linda (Linda went first) that her son was with the girl he would marry, and to expect a surprise next March, and a baby outta him. I guess I’ve gotta nutpunch Kenny in advance for cheating on me in the future! She didn’t tell me that she saw a baby, but she told me that the guy I’m with is my “soulmate,” whatever that means. I said, “HIM??? REALLY???” Ha ha 🙂 We’re going to find a REAL psychic, Psychic Tim. We’ll hear TRUE, GOOD THINGS then.

Oh, one thing she did say was that my card revealed “work turmoil” and many changes. She didn’t get the death card with my job, so she said it wouldn’t mean loss of a job for me, but some type of changes within the next year. Great. I actually like this job. Good thing I’m used to changes. I’d better bank my gambling winnings just in case…..

I’ve got more, oh so much more, great and interesting things to blab about, but must leave you with this, or I won’t be functionable in the morning. As it is, it’s going to be iffy. And I didn’t even make time this weekend to read The Time Traveler’s Wife. What’s wrong with me?? It’s so good, I need to MAKE time. Peace!