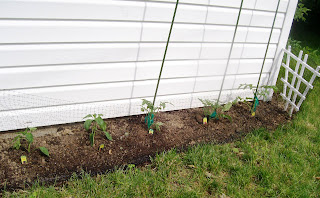 Got the little garden in over the weekend. It’s super-small this year, had debated not planting anything at all, but finally succumbed to the lure of homegrown tomatoes and green peppers. If all goes according to plan, I can make stuffed green peppers with my own Big Bertha peppers and homemade tomato sauce. That is, if the garden produces a little better than it did last year. Can five plants even be called a garden??

The 88 year old neighbor next door, Stanley, even helped me plant them. He actually just took over for me, showed me how the tomatoes needed to be planted deeply and helped me get the right mix of peat moss and organic fertilizer. He also pointed out the weeds that were choking out the peony plant; Timmy and I thought the whole thing was part of the flower, but that wasn’t the case. So I got that weeded out, and figured, “Why stop there?” and weeded the backyard by the back porch. It’s looking pretty good around here, if I do say so myself. Mostly thanks to Timmy, he has tackled the front yard with vigor this year. So anyway, Stanley, who is normally the grouchy crotchety old man next door, is going to water my plants for me while we’re in Vegas. Maybe he’s not so grouchy after all. Maybe.

I finally got the porch ready for summer, scrubbed ‘er down and got the furniture out there. The cats and I had a porch party, they were very excited to go outside and see what all the fuss was about. They sniffed and walked and laid on everything. They each took a turn trying out the various chairs, which you are privileged to see the photos of below. Just be thankful I don’t have a baby – the photos of the cuteness would be nonstop!

Caesar tries out the chaise while Girlie picks a spot on the floor and Stanley contemplates jumping onto the chaise himself: 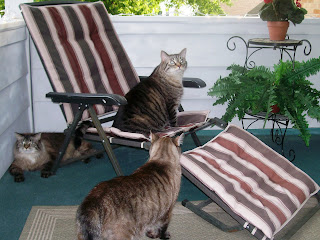 Girlie tries out the white wicker chair, fit for a princess such as she: 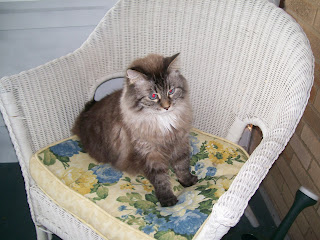 Twinkie gives the white chair a through sniffing: 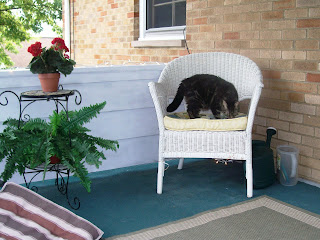 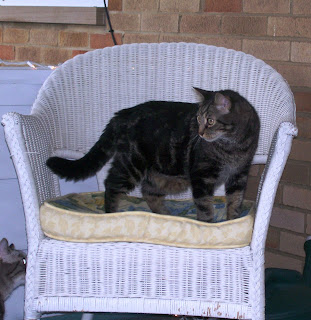 The Boys try out the rocking chairs: 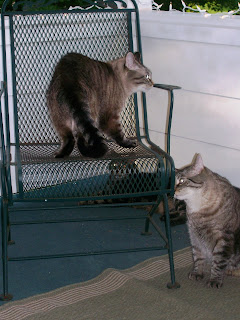 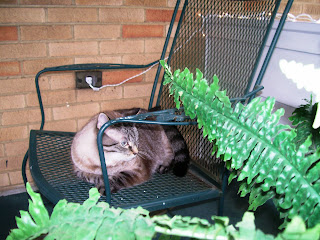 For a little nighttime ambiance this year, I strung some porch lights around the rail. They look super-cute and inviting at night! 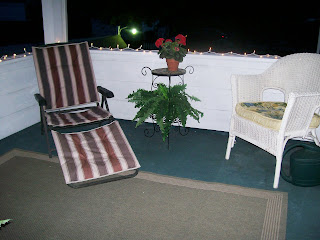 So that’s the porch. Widda was out there, too, but she got spooked really quickly, before I was able to even get a picture of her enjoying the porch. Twinkle and I sat out there and read for a while on Sunday. We love our little porch get-away. I’m holding off on buying any live plants until we’re back from Vegas.

Well, I won’t add much to this, I’m sure my faithful reader has lost interest by now. Truely, it wasn’t much more interesting than this.

Sunday afternoon I joined Katie and her friend for a play at the Cleveland Public Theater on Detroit & W. 65th. It was a One Act thing, an hour long, primarily a monologue about a middle-aged woman seeking to find herself. Something like that. There was a second play after, but I bailed out at intermission, the joint was NOT airconditioned and it was 93 degrees. Nary a fan in the place, either. But they were giving away complimentary water. Imagine that.

Driving through that Ohio City neighborhood, I realized one very important thing: I DO NOT BELONG THERE. It is definately an uncomfortable neighborhood for me. I don’t care, call it up-&-coming, whatever. It’s just white trashy and neglected. I saw a group of people pouring out of a house, on their way to a beach or something. I assume, anyway, as there was a stringy-looking alabaster-white girl with a limp bleached blond ponytail wearing an ill-fitting bikini top and some low-hanging yellow shorts which showcased her duel-gun tattoos, one on each hip. They started high on her hipbones, with the muzzels pointed to her crotch. Why?? What does that even symbolize? Well, it had me looking twice so perhaps Mission Accomplished. On the way out of the theater an older, shirtless black dude with dreadlocks wanted me to stop and, “Just listen to me here for a while.” Um, no. My mother taught me not to talk to strangers. Sorry. I was happy to get back to my not-so-bad little Parma neighborhood. At least I know the hillbillies I’ve got.

Ken and I got my pre-trip house shit underway, and got the desk moved out of the living room and into the basement. Still a lot more to do, but it’s going. Just my typical stress-before-vacation mode, nothing new here, folks. I’m VERY excited about Vegas this time, maybe because it’s been six months since we were there last. The hotel limo is going to pick us up from the airport, we’ll have our names held on a little sign by the driver when we land, just like celebrities. Kenny thinks it’s queer, but I’m excited about it. And it’s “free” with his Diamond player status – ah, the perks.

Okay, I’m off to bed. Kenny picked up some smoked kielbasa from State Meats just down the street and we’ve both been farting up a storm all night. I don’t know which end of us is worse, our bad garlicky breath or our rancid asses. At least we’re in it together! I am definately a delicate little flower – is it really any wonder I didn’t stay single for very long at all? Booh-Yah!

Peace, and keep your cool in this hot hot weather.

2 thoughts on “The Smell of Summer”