It’s Kenny’s Birthday Month – HOORAY for Kenny! He’s turning 40 on the 3rd. We kicked off Birthday Month with a surprise party for the Man of the Hour at Harpos Sports Bar in Brookpark, and it was a really nice turnout. In the spirit of things, I had an Indiana Jones cake crafted for him by my favorite bakery, Becker’s. Another delicious confection. And I let two little boys take home the “toys” from the cake and they couldn’t have been happier! They thought the cake was the BEST THING EVER. Kenny agrees. 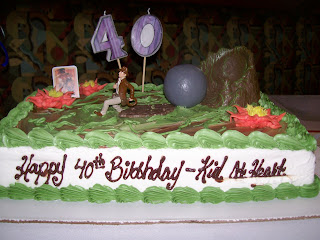 Kenny says that no one gave away the surprise. He seemed to be a little shocked when he got there and saw everyone, he realized it wasn’t a celebration party for Vera as we had duped him into believing. He promptly drank him some beer(s). Ah, 40. 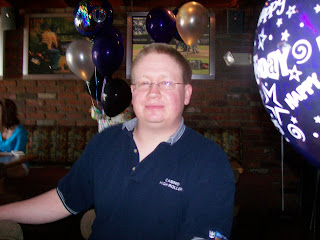 Marge didn’t disappoint, she came through with the Dirty Gift that every surprise party requires. A reminder, this is from his 88 year old grandmother, a boobie beer can holder: 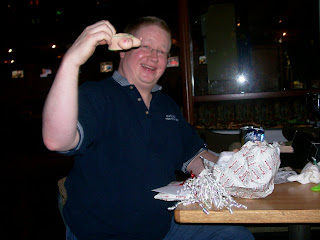 I couldn’t have found a better family to fit in with!

Pete & Kenny canoodled. Well, not really, but if this were Hollywood, that would be the story that got told. 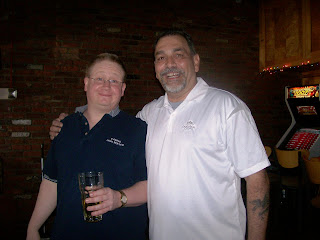 It was a really nice turnout. Linda brought some really fun balloon decorations, which are now sitting in our dining room, which I’m sure will be chewed up and spit up by the cats at some point during the night. Can’t wait for the ribbon-laced puke – it’s almost like a puke present!!! It’s a-comin‘, it’s a given and not a maybe. We all get to enjoy the balloons in our own way. 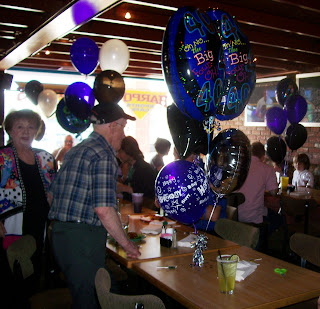 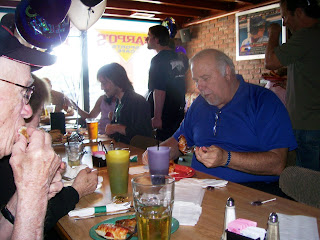 Everyone needs a surprise party at some point in their life. Now Kenny’s had his, and I get to check off “Throw a Surprise Party” from my While I’m still 98.6 Degrees list. I also had one for my mother many, many years ago, so this makes two for me. I can consider that a job, done.

Needless to say, I’m exhausted with all the hype of the weekend and I’d like to just wind down, but I have a PILE of laundry on the bed that needs to be put away before I can even think about anything as indulgent as laying down and reading a book. So here I sit, blogging instead – my typical procrastination effort. But I also find it relaxing so it’s doing it’s job of winding me down a little. That, and the margaritas have kicked in a bit. On to other things that require me to get off the computer and up outta the chair. I’d like to get to bed before midnight today. Which, by the way, reminds me that I slept in both days this weekend until 10 a.m. and have deemed 10 a.m. the PERFECT hour for rising and shining. At 10 a.m., I actually do feel like shining a bit, it’s just such a nice, refreshing hour for awakening. Seven o’clock, not as much.

Peace, and love the ones you’re with.