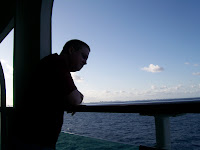 The cruise wrapped up with an uneventful day spent at sea on Sunday. It was a weird itinerary, because we weren’t actually cruising anywhere, we were just anchored out at sea. That could have been planned a little better, because let me tell you, anchored without a breeze made for one hot, stagnant day. I tried to go atop and read a book, but that lasted about ten minutes before I was roasting and went down to the solarium. Where it was green-house hot. I hung out there for a while sipping lemonade, but even that wasn’t ideal. I know, I know – poor me: It was too hot on my cruise ship.

We arrived back home after a smooth flight only to hear a distressing message on our answering machine: Kenny’s Grandmother Helen was in the hospital. He made a series of phone calls and finally connected through to the hospital, where we were told to hightail it up there as quickly as possible. We dropped everything and ran out of the house, still in short sleeves and sandals, and made it to the hospital moments before she died. Kenny said a few words to her and she slipped peacefully away. Everyone thinks she was waiting for him, she had been in the hospital since Friday, but we were of course unreachable. Helen died on Kenny’s father’s birthday, so it was quite symbolic for the family, with his father being dead and then Helen waiting to hear from Kenny before dying, going home to her son (Kenny’s dad). The week was naturally busy with funeral details, the wake scheduled for Thursday and the funeral on Friday. Helen was a devout Catholic, and I had given her a cross I had purchased while in Rome, it had been “blessed” by the Vatican and it was very dear to her. The family asked if they could bury her with it, and the answer was of course, yes. So it was a very strange week for Ken, the high of a vacation brought down by the death of his Grandmother. Such is life, for sure. You just never know what the day is going to bring.

Friday afternoon, after the Mass and burial, I headed to Ann Arbor with my friend Katie on our quest to see the Dalai Lama.

We purchased tickets months ago and were eagerly awaiting our enlightenment. It was a beautiful day for a drive, and we checked into our hotel around 4:00 p.m. The hotel provided a free shuttle service, and they drove us to the heart of the downtown area where we walked and shopped and dined and shopped some more. We purchased these, Dolly Lamas:

I am sure it’s wrong on some level, but it was too funny not to purchase. We were told they were actually Alpacas, but we insisted they were Lamas, since we were there to see the Lama. The store missed an ideal marketing opportunity, in my opinion. We bought three Lama’s, one for each of us and one for Katie’s sister, Rita.

We posed them in a variety of scenarios, which I’m sure we’re going to come back in our next life as a snail or something for doing so.

The Daili Lama with the Dolly Lama:

Friday night we attended a talk on the correlation between art and spirituality, and we had a surprise guest of Richard Gere in attendance. Now, Richard Gere has been my lusty movie star desire since back in The Day – the day of Officer and Gentleman, Breathless, American Gigolo, etc. I would see any-and-everything he was in – I still do. So I could barely contain myself, I had to remind myself it wasn’t a rock concert and it would be inappropriate for me to shout out something like, “Show me your wiener!” – which I wanted to. I’d like to kiss those lips of his. Man alive, I had impure thoughts during the entire discussion. We captured one covert photo, not good, but we were defying the rules to even pull out the camera. Dick Gere is on the end, with his hand supporting his head. He’s probably bored and thinking of me.

Speaking of bored, wow, was it a boring discussion. Difficult to understand, difficult to follow, just plain difficult. It wrapped up and Katie and I headed back to the Sheraton, calling it an early night.

Saturday morning we had our tickets to see the Dalai at Crisler Arena. The shuttle dropped us off, and we planned on leaving around 1:30 and scheduled a pick-up. The discussion was scheduled from 10-12, with a 2-hour intermission before it picked back up from 2-4. Katie and I lasted one hour. Wow. It was difficult to sit through. The arena was steamin‘ hot, and once His Holiness began talking in his native language and everything required a translation, it was slow and hard to follow. The initial prayer was really nice, and it was cool to hear the silence in that big arena when the Dalai came out. Everyone was really respectful, which is surprising to see in a crowd. We didn’t see the demonstrators or any type of big shenanigans, which I was somewhat looking forward to. So that was that. Our entire encounter with the Dalai Lama lasted one hour. But we did get a book. I think this might be better in the self-study mode.

Since I was home so unexpectedly early on Saturday, I hooked up with our friend Vera, who was dropping Pete off at the house to hang out with Kenny. Pete’s sister is some type of a chauffeur for a production company and they were doing some filming in Cleveland for an upcoming movie called Soloist starring Robert Downey Jr & Jamie Foxx. With Pete’s connection, Kenny and Pete were able to get a tour of the Cleveland set downtown, roaming around and checking things out. 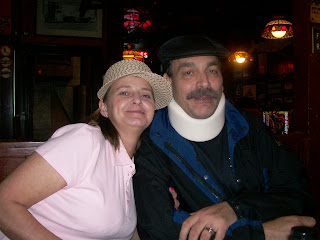 They had a good time while Vera and I went shopping, eventually hooking back up with the guys at Jigsaw Tavern for a cocktail and appetizers. Pete’s still rockin‘ the neck brace from his surgery a few months ago. He should be all healed up next month. They’re going to Vegas with us in June for the birthday bonanza, should be a really fun time with them along.

And that wraps up a very long week. It was full-speed-ahead busy, with life and death situations marking the passage of time. I did get the plastic off the windows and Spring was invited in.

Peace, and have a respectful week. Namaste.