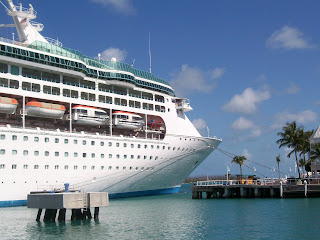 Just a short week ago I was enjoying a Cheeseburger, in Paradise. Literally. We docked in Key West and had to go through the rig-a-ma-role of immigrations since we had been outside of the country in CocoCay. Everyone had to participate, even if you weren’t getting off the ship. We were done with that around 9:30 a.m. or so, and headed directly off the ship and onto land. 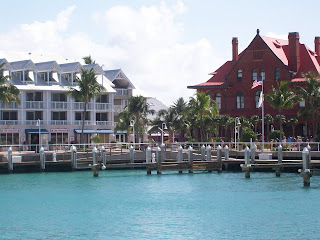 We walked and shopped, purchasing a couple of necklaces from some street vendors. I picked up a a couple of really cool glass necklaces and a handmade bamboo necklace, made by a dude who spends his life sailing and selling these necklaces to support himself. He had seriously long dreadlocks. Picture-worthy, in fact, but I thought that might be rude to ask for a photo of his hair. I did ask to touch it, and he told me that I didn’t want to feel where that hair had been and advised against it. I heeded that advice, but bought the necklace anyway. I believe I have a blurry line of rude/non-rude behaviors, because asking to touch the hair didn’t strike me as being rude, but a photo would have. I did get my photo taken with these giant folks, they didn’t mind at all. 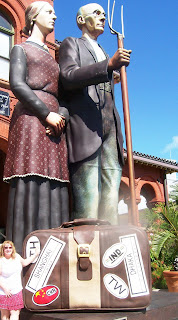 The day was really hot, much hotter than the prior day in CocoCay. I am definitely not a hot-weather girl. I’m sizzlin‘ enough on my own, apparently! Luckily we reached our first destination, where icy cold beers awaited. 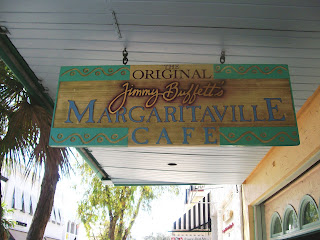 I was already beginning to show the beginnings of sunburn, despite the liberal amount of sunscreen I had applied before we headed off that morning. The Landshark beers helped cool it all down just fine! Landshark is my new favorite brew, a product of Margaritaville. It’s Corona, only better – without the bitter aftertaste. Ah, pure refreshing bliss! 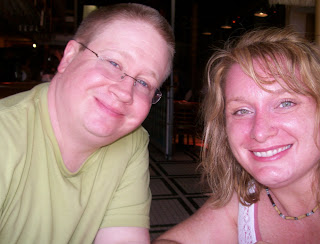 Don’t know why we bothered looking at the menu’s, we had to get cheeseburgers! We also ordered conch fritters, you can’t be in Key West without having something conch. 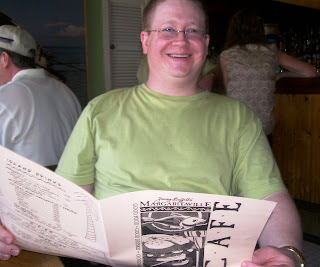 We had ours with lettuce and tomato, Heinz 57 and french fried potatoes, big kosher pickle and of course an ice cold beer. 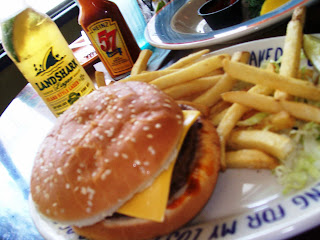 First chomp: YUM!! Man alive, was my face on it’s way to a beautiful shade of red. 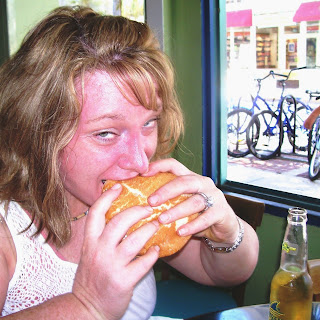 Maybe the flowers are really just sunburt, too. I was on my way to matching the shade: 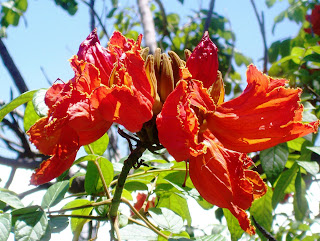 We had a perfect view by the open-air window next to the street, ideal for people-watching and being “in the action” from the cool comfort of the bar. Two of our dining companions strolled in and we invited them to join us at our prime location. Their names were … Joe and “Other Guy.” And I’m really not sure about the Joe part. I’m bad with names. They were older, they have been friends since college and are now in their later 40’s. NOT GAY (not that there’s anything wrong with that!) as they kept insisting. I told them they reminded me of the two guys from Sideways and Other Guy really liked that comparison, he loved the movie. We had a few more rounds of Landshark before heading in our separate directions. Kenny and I still had a lot of island to explore.

We walked by a very ornate building, what used to be a movie theater and is now a Walgreens. How disheartening. 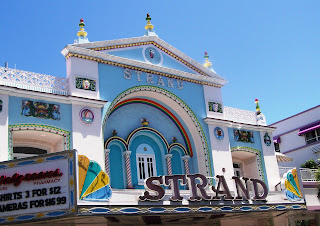 The little sidestreets were quiet, in sharp contrast to the hustle and bustle of Duval Street: 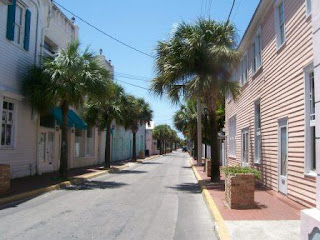 I convinced Kenny to go on the Hemingway Tour with me, even though I had seen it before I enjoyed it enough to do it again, and it would be a first time for Ken. And I knew Rob would be so proud that we walked around and saw stuff that didn’t involve a casino!! 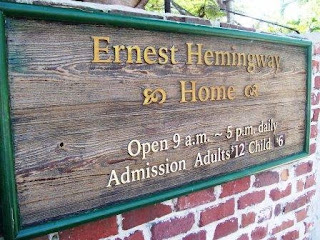 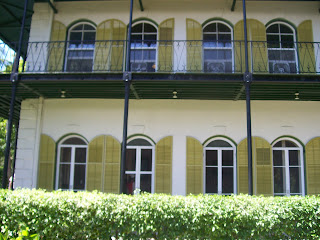 I enjoyed the tour the second time around even more than the first time I saw it, I had better company on this trip 🙂 We paid our due respect to the 47 cats on the premises. 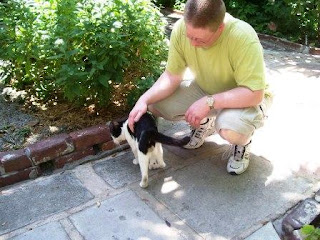 We saw a Hemingway–Widda (we call all black cats Widda, after our black Widda cat), Polydactled of course, which is the norm for a Hemmy cat. Check out the size of that paw! 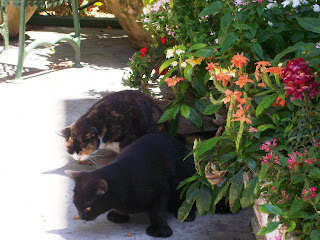 After touring Hemingway House, we walked to the Southernmost Point in the continental U.S. for the obligatory stop. It was a long, hot walk back to the ship, so we made one more stop at Sloppy Joe’s Bar, which is where Hem liked to hang out back in the day. We had some beers, and noted the seriously defined camel toe on the waitress. Well, I noticed it and pointed it out to Kenny, who hadn’t been paying attention. Am I the only one who checks out everyone’s crotch area that intently?? In my defense, it was right at eye level when she was serving us. But maybe it is just me! Whatever, I noticed it and then Kenny couldn’t stop looking at it. It was old camel, not young, but we left her a big tip anyway. She rocked the ‘toe, might as well tip her for it.

I was definitely looking the worse for wear in the heat, and we headed back to the ship. It was a bit of a hike and we got back there around 5:00 p.m., about a 1/2 hour before we were scheduled to depart. I took a shower and the full effects of my sunburn set in: 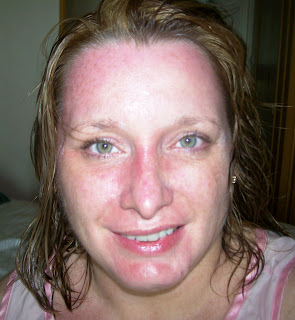 Kenny had a sunburn, too: 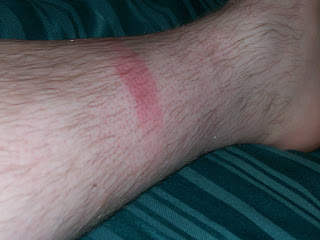 He obviously did a better job with the sunscreen than I did. He had one little patch, just above his sock line.

We pulled up anchor and said goodbye to Key West….. 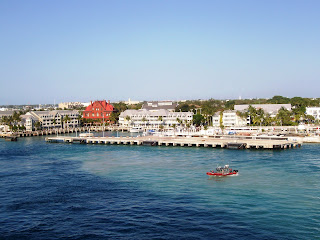 ….and then sailed off into the sunset….. 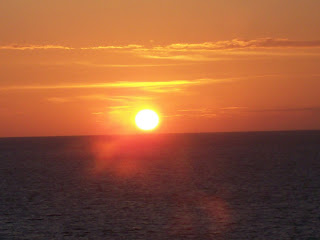 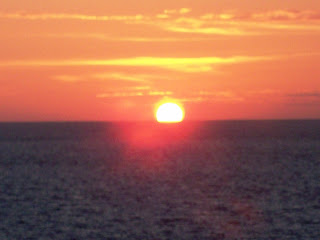 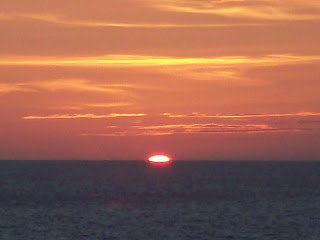 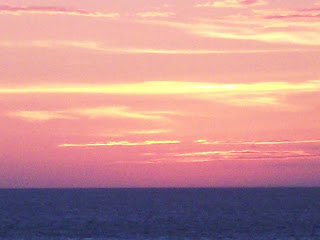